Father Seraphim came to give advice to his young student less and less often. He telepathically felt the progresses the latter made in both arts of meditating and praying. He even saw his disciple with his face in tears a couple of time, meditating as Abraham and arduously praying for the people: “Lord, I humbly beg Your Divine Grace; otherwise, without Your help, what would become of them?”

One day, the young man came especially to talk to Father Seraphim. He asked him: “Father, why you have not spoken to me about Jesus yet? What was His prayer, His form of meditation? I know they only talk about Him in all High Masses and church services. In the prayer of the heart, as “Filocalia” describes it, His name is often invoked. Why you are not telling me anything about Him?”

Father Seraphim seemed very troubled, as if the former asked for the revelation of his heart’s most intimate secret. The higher the received divine revelation is, the greater the humility it needs to be transmitted further. Father Seraphim confessed he did not feel that humble to communicate such a secret: “Only the Holly Ghost can teach you that. Nobody but the Father knows who really the Son is and nobody knows who the Father really is but the Son and those to whom the Son decides to reveal Himself”. (Luke, 10, 22).

It is necessary for you to know you must become one (in other words, to fully identify yourself) with the Son to pray as the Son and to have, with the One He called His Father and Our Father (God), the same intimate relations as Him, and this fulfilment cannot be but the deed of the Holy Ghost, which will unveil, then, the meaning of all Jesus’ words. The Gospel will start to be fully alive in you and it will teach you to pray as you have to”.

But the young man insisted to know more. Father Seraphim smiled: “All right, but you must know that meditating as Jesus means revising very well all forms of previously learned meditation. You must also know that Jesus was, is and always will be the cosmic man. He perfectly knew how to meditate as the mountain, as the poppy, as the ocean, as the bird. He also knew Abraham’s meditation. His heart did not have borders and that was why he loved his enemies, too. 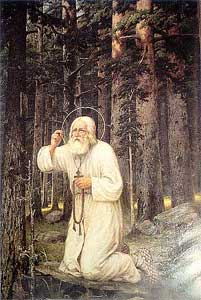 Remember that Jesus said on the cross: “Forgive them, Father, as they do not know what they are doing”. His hospitality and his benevolence were equal for everybody. He received with love and compassion even the sick, the sinners, the paralyzed, the prostitutes, the ones that would sell Him. During the night, he isolated in Nature’s loneliness to pray and full of love often murmured like a child: “Avva”, that means “Father”…you might find it ridiculous to call the Transcendent, the Infinite, the Unnamed, the one beyond everything, “Father”.

Still, that was Jesus’ main prayer and he said everything by this one word. The Earth and the Sky completely fused in Him, due to His giant Faith. God and man were one and the same in those moments. There is no doubt that you must speak with great devotion and aspiration the word “Father” in the silence of the night in order to understand what it really means…

Today, when in this world the relation parent-child have changed so much, in many cases they do not mean a thing, few are those that will understand what I mean here. Maybe now, this image does not correspond to the realities of this world at all.

This is why, I preferred to tell you nothing, to use no image and to wait that Holly Ghost gives you the feelings and the secret knowledge that Jesus Christ had; thus, this unique word “Avva” will not just come out of your lips but from the depths of your heart. Only then will you truly understand what secret prayer and hesychast meditation are.”