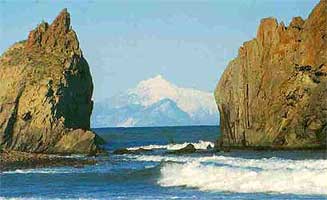 The young man came near the sea. Retrospectively thinking, he realised he had a more stable posture and a straighter spine. What was missing, then? What could he learn from the waves’ tornado? Soon, he noticed the wind was getting stronger. The sea’s flux and reflux became stronger and that awakened in him the longing for the ocean. It could not have been a coincidence the old monk asked him to meditate like the ocean, and not like the sea. Where did he know about the long hours he had spent in the north of the Atlantic Ocean, surrounded only by night, when he had learned to breathe in the rhythm of the waves? Breathe in, breathe out … then: I am breathed in by God; I am breathed out by God. I let myself completely carried by the breath, as if I were carried by the waves…

He re-started those exercises. Srange, everything was in the present! Before, when he was doing the same thing, he forgot about himself, he dissolved like a drop of water in the sea. Now, he realized that the drop, he, still kept the form, the self conscience. Noticing these transformations, he wondered: “Could this rooting effect be the result of the posture with the straight spine?” The young man was no longer carried by the rhythm of his breath as before. He managed to keep his conscience’s identity unaltered. He was a drop and apparently “one with the ocean” at the same time. Thus, he learned that profound meditation means profound and natural respiration at the same time, in other words, free letting of breathing’s flux and reflux. 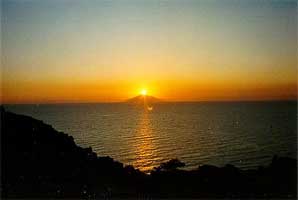 He also learned that the bottom of the ocean always remained still, even if there were many waves on the surface. Shortly after that, he realized his thoughts also came and went away, but deep down in his being something eternal and indescribable (Immortal Self) remained still. With each new day of profound meditation, the young man lost completely his identity with the thoughts’ “waves”, becoming more and more one with the ocean’s still bottom (Immortal Self).

He gladly remembered the verses of the poet that marked his adolescence: “Life is like a sea troubled by waves. Common people see only the waves out of it. Look carefully how waves permanently come out to the surface from the depth while it remains hidden, beyond them”. The sea was not “hidden” for him anymore; all beings and things’ identity was more obvious without cancelling variety. Environment and shape, content and look, visible and invisible did not appear to him as oppositions anymore; all those started to melt in life’s unique ocean.

He wondered if the basis of respiration was Ruah or pneuma or yogis’ prana, or simply God’s almighty respiration?

Father Seraphim said “The one who carefully and detachedly listens to the respiration is not far from God. Listen very carefully the end of your breathing. Listen carefully its beginning”. Arduously practicing the advice, the young man realized that there was a more profound silence than waves’ flux and reflux in those secret moments of beginning and end, something that looked like the ocean…

Meditating as a red poppy