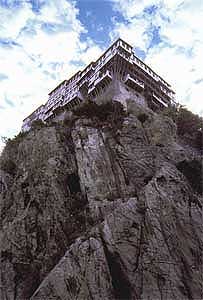 Father Seraphim’s teaching was natural and therapeutic. As Filon from Alexandria said, ancient monks were actually “therapists” (“healers”). Before leading someone to true illumination, their role was, first of all, to cure human nature fast and to completely harmonize it so that it could receive God’s Elevating Grace that did not contradict nature, but restored and fulfiled it.

The mountain, the poppy, the ocean, the bird taught the young man to re-become aware, to resume life’s different live levels that human being knew once or, in other words, the different kingdoms that created the Macrocosmos: the mineral, the vegetal and the animal one. Man – as anyone can realize looking carefully around and inside him – has lost contact (resonance) with everything is good and divine in Macrocosmos: the rock, the plants, the animals and this bad state triggered discomfort, diseases, insecurity, loss of love, unhappiness and anxiety.

He became a foreigner in his universe due to that great sin. Profound meditation means, first of all, spontaneous and sincere praise of the universe, as Saint Parents said “all things and beings learned how to pray before us”. Man, as a being privileged by God, is the only location in the universe where praying becomes real and totally aware of itself.

This is why man is here, to consciously give names to things and beings that other creatures just babble…Together with Abraham, we enter a brand new and much higher level of conscience that is called faith or unconditional adhesion of both intelligence and heart towards this “You” that Exists, that secretly  looms to those capable of intuiting Him, everywhere in multiplicity.

This is Abraham’s experience and meditation in short. Thus, we understand there is always something more and greater behind the stars, a mysterious and overwhelming presence, very difficult to define, which nobody can name precisely but which contains in it all names…all forms…all forces…all aspects…all energies…and something secret and untouchable in addition.

After he learned the straight posture, the rooting, the positive orientation towards God’s light, the silent breathing of the ocean and the secret inner song, the young man was invited to completely and truly awaken his heart. “Now learn that you are one of God’s beings, understand that what really characterizes your heart is the fact that it personalizes all things, all beings, even the Absolute, which is the source (the Final Spring) of everything that lives and breathes. Understand that all that exist call Him: “My God, my Creator” and they let themselves be penetrated by His Presence. Meditating as Abraham means, actually, always maintaining the contact with the Unique Presence (God) beyond the most various appearances. This profound form of meditation aims to all concrete details of the daily life. Remember the episode with the oak from Mamre.

Abraham was sitting at the entrance of a tent, in the warmest moment of the day. He had just received the visit of three strangers, there; later they would prove to be God’s messengers. Meditating as Abraham means practicing hospitality full of devotion and humility, giving a glass of water to the thirsty one. This will not disturb you from your silence; on the contrary, it will bring you closer to the source (the endless Spring). Do not limit yourself to just awaken in you God’s profound peace and light, but fill your heart with love towards all beings on Earth.

Saying that, Father Seraphim read the young man a long passage from “Genesis” that described Abraham’s interposition by God. In front of God, the One that is, was and always be, he says: “Do you really want to suppress the sinner along with the right one? If there are only fifty right and good persons in a city, will You destroy them together with the whole town, too? Or will You forgive the whole city for the sake of those fifty?”

Little by little, Abraham had to reduce the number of the right persons, so Sodom would not be destroyed. “Oh, God, do not be angry. Maybe we will find at least ten right persons there.” (“Genesis”, 18,16). Profoundly meditating as Abraham means interposing for people’s life with love and compassion, without ignoring their sins, constantly and faithfully invoking the divine compassion.

This type of meditation shortly frees the heart from judgements and different damnation; it will always invoke God’s forgiveness and blessing no matter the effort given for contemplation. 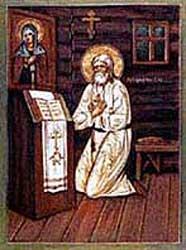 “Meditating as Abraham means more than that” – Father Seraphim’s voice trembled with emotion. “It means reaching the ultimate sacrifice; even the self sacrifice”. He read the young man another passage from “Genesis”, here Abraham was capable of sacrificing his own son, Isaac. “Everything comes from God and everything belongs to God only” murmured Seraphim. “Everything is from Him and everything is for Him. Abraham’s meditation will lead you to a total detachment from your ego and from everything it has most precious. Search within the closest to your soul, the thing or aspect with which you identify yourself most. For Abraham, this was his son, Isaac. If you are also capable of giving it to God, totally abandon yourself, in full faith for the one that transcends intellect and (apparently) common sense, everything will be given back to you, a hundred times more. God always takes care of His children. Meditating as Abraham also means to fill your time, heart and conscience with God’s presence. Remember that Abraham had only his son in his heart when he climbed the top of the mountain. When he went down, his heart was with God only.

To learn the lesson of the sacrifice means to discover that nothing, ever, belongs to “you”. Everything belongs to God only. This means the death of the ego and the revelation of the Immortal Self. Meditating as Abraham means fully and faithfully fusing with the Eternal and Almighty (God), which transcends the universe (Macrocosmos), means to practice hospitality with joy and love, to interpose (by praying) for everybody’s salvation, to often forget yourself and break any attachment in order to discover that the One that lives in the depths of your heart, as the entire universe, is “The one that exists because it truly exists” (God).