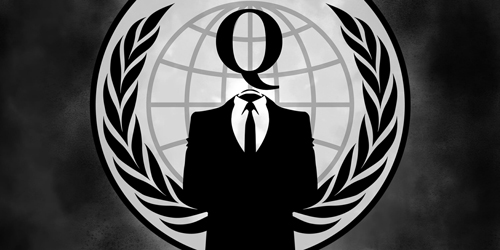 Here is a plain-text version of the two posts so the words will show up in search engines and be easier for you to copy and paste into other forms:

No.
Highest classification.
Consider the vastness of space.
Q”

Did NASA fake the moon landings? Have we been to the moon since then? Are there secret space programs? Is this why the Space Force was created?
>>3094804

False, moon landings are real.
Programs exist that are outside of public domain.
Q”.

All In Response To Request For Q&A

This all started in response to Q Anon calling for Q & A (Questions and Answers) just over an hour beforehand, as follows:

This was an obvious call-out to the people reading the board and interacting. It appeared as of 18:50:13 EST.
Just twenty minutes later, at 19:10:44 EST, someone asked the big question: Are we alone in the universe? And was the Roswell crash truly an extraterrestrial spacecraft, rather than a Project Mogul “weather balloon” complete with test dummies? 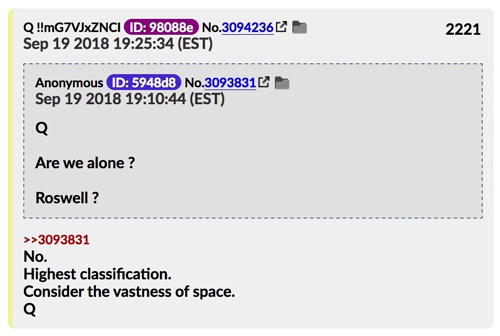 This confirms what my colleagues in the UFO community have been saying all along.
Not only do UFOs and ETs exist, this subject is considered the single most highly-classified “government” secret there is.
It’s one thing if we are being visited. That’s already very interesting. We discuss the historic evidence of this all the time on Ancient Aliens.
It’s quite another thing if Roswell was real, if we recovered the crashed technology, and if we then “reverse-engineered” interstellar-capable spaceship technology from it.

Seventy Years Is Quite A Long Time

Roswell was seventy years ago. That’s a very long time for us to have developed entire fleets worth of ships based on this technology.
That also means that we would have had plenty of time to develop bases on the Moon, Mars and elsewhere.

The second post in this series confirmed that this is exactly what has happened.
Also notice the “numerical synchronicity” of the Roswell post from Q. It is number 2221. I loved that.
This numbering may have been a deliberate, intentional act on the part of Q, since they do love codes and symbolism.

We have pointed out “numerical synchronicities” of repeating digits in the hit counters of almost every article we write.
I come back to make an update or check on the hit counter, only to see a pattern of repeating digits.
This occurs without conscious effort. It is very consistent, and it suggests that our work is being influenced by higher consciousness in some way.
If Q did NOT do this intentionally, that actually makes it even more interesting, particularly since 2221 is only one away from being a perfect “quad” of 2s.
The last “quad” that was even possible for the Q posts was 1111, and that was all the way back on April 9th, 2018: 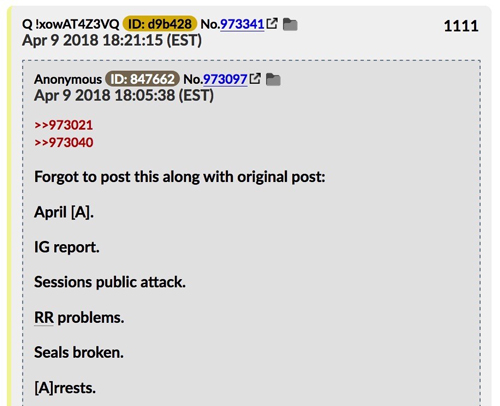 Furthermore, there are different Q aggregators that don’t all have the exact same numbering systems, as they don’t all catch every post.
So trying to hit a “quad” is, by definition, an inexact science, and would be dependent upon which app you’re using to view the posts.
Also, sometimes posts disappear and then re-appear, based on the way the app is grabbing information.
That is another reason why the number could have been one off, if the Q team was trying to do this intentionally.

But I Mean, All Right, We’re Not Really Talking About It

Ultimately, who cares whether Q intentionally planted this on the first “quad” to hit since April, or if it truly was a “random” synchronicity.
The message that texts number 2221 and 2224 contain is of far greater significance.

This is the Big One. This is the moment I have been waiting my entire life for. It is what I have dedicated my entire career to ever since posting articles online in 1996.
Q has gained the attention of hundreds of millions. It is all over the mainstream media now. Everyone is talking about it, whether they believe it or not.
It has gotten so big that the mainstream media has had no choice but to discuss it. Obviously, their goal has been to discredit the whole thing.

My guess is that if Q had mentioned anything like this earlier, the media would have focused just on that, and ignored everything else.
All the headlines would say sarcastic, mocking things like, “Q: Little Green Men And Other Trump Fantasies Gone Wild.”

I did see a definite clue that an announcement like this might happen earlier this year, but it was vastly more subtle than what just happened.
In my Alliance talk at Contact in the Desert in 2018, on Sunday, June 3rd, I drew attention to two previous Q posts that were very interesting.
To me, these posts were the closest to a hint of a possible UFO-related disclosure that we had gotten… up until then.

One had said “SKY EVENT.” The very next post showed a picture of three skyscrapers connected at the top by what honestly looks like a cigar-shaped mothership. 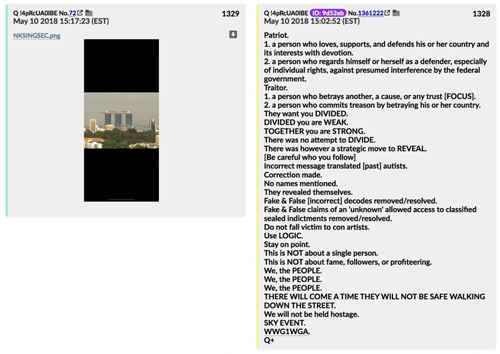 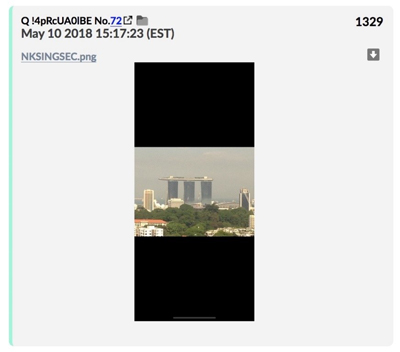 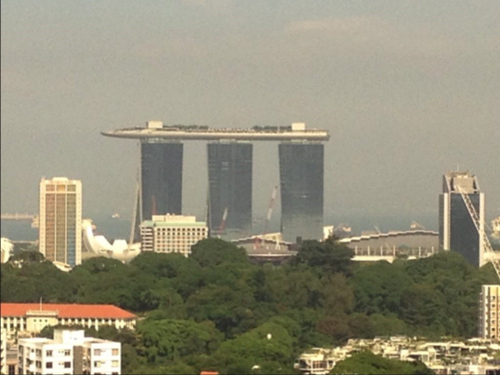 Cigar-Shaped Motherships… And Being “Held Hostage”

At first I didn’t even know what I was seeing. Was this a craft hovering over three skyscrapers? Was this even real? What was it?
This was particularly significant because of numerous UFO reports over the years of cigar-shaped “motherships” holding many smaller saucer-shaped craft.
Furthermore, Corey Goode’s testimony of his time in “Solar Warden” included details of serving in a submarine-type craft with similar features.
It is interesting that right before the words “SKY EVENT,” Q said “There will come a time they (the Deep State) will not be safe walking down the street. We will not be held hostage.”

Only the elite have had access to the Secret Space Program, according to many insiders.
The idea that “they will not be safe walking down the street” has taken on new significance with this week’s homemade mail bombing attempts.
From the Drudge Report:
“10/25: Pipe Bombs Sent to Multiple Democrat Figures
Pipe bombs were mailed to prominent Democrats, including George Soros, Hillary Clinton, Barack Obama, Representative Maxine Waters, and former Attorney General Eric Holder.
Another was sent to the CNN station in New York and was addressed to former Director of the CIA John Brennan.
Others reached former Vice President Joe Biden and actor Robert DeNiro, an outspoken and vulgar critic against Trump. None of the bombs were detonated.”

Despite the perpetrator being identified as a “male stripper with a steroid problem,” there may still be deeper levels to what we are seeing here.
Hypnosis, trauma and amnesic drugs can be used to influence people to do violent actions, without any conscious awareness that they are being influenced.
Even before the perpetrator was captured, articles like the one at this link were speculating that this could have been a “false flag” event.
These attacks did not succeed, but could conveniently be used to frame the coming mass arrests as the work of civilian vigilantes.

Trashing the Economy to Create Chaos

Our insiders also said the Cabal would attempt to trash the global economy as the arrests grew near, and we are now seeing that happening as well.
A really good economic collapse on the level of 2008, or worse if the Cabal gets their way, could definitely distract the public.
These increasingly edgy market movements suggest the Cabal is busily trying to throw us all into chaos right now, as a last-ditch effort.

Getting back to the Q quote from May 10th, 2018, the term “SKY EVENT” also suggested that we may at some point see the decloaking of advanced craft.
This could be a key aspect of disclosure after mass arrests.
A recent briefing from Pete Peterson confirmed that this exact scenario is being planned for a time soon after the arrests take place.

The enigmatic building in Q’s May 10th “SKY EVENT” posts ended up being the Marina Bay Sands Hotel in Singapore.
Here you have three skyscrapers connected by a commonly-shared viewing deck that is built to look like a stylized cruise ship, complete with trees and viewing decks: 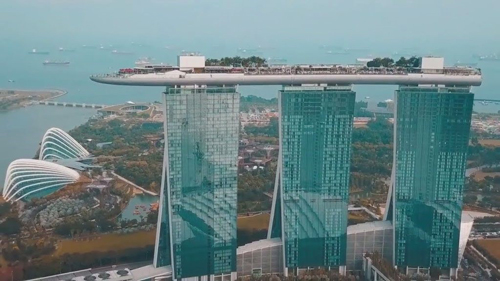 Q telegraphed a location that was near to where peace talks would occur between North Korean strongman Kim Jong-Un and POTUS, apparently before it was publicly announced.

The Q posts happened on May 10th, and a variety of researchers said the picture of this hotel was posted before the summit location of Singapore was announced.
The offer to meet was withdrawn in May, and only re-appeared as of June 1st, with the location being given as Singapore.
The Marina Bay Sands was apparently not where the actual summit took place, but was rather a meeting of corporate heads nearby that both leaders visited:

I find this “nearby meeting” particularly interesting in light of some of the material from the latest briefing I got from Pete Peterson. In case you are new to all of this, Pete is a very high-level insider who worked for the CIA, NSA, DIA, DARPA and DHS, among others. He was a leading expert on classified technology for the Reagan Administration, and worked directly with Bush, Cheney, Rumsfeld and other “Sith Lords.”

Pete came forward in 2009 after feeling he had “mud on his wheel of karma” he wanted to clean off. We have been best friends ever since. He is now living in a nursing home, but thankfully is no longer in a delusional state after having fallen, hitting his head on the hard ceramic of a toilet, and then enduring a stroke.

This event could very well have been the result of unusual methods used to try to assassinate or otherwise cripple him for life, and thankfully that did not happen.
Sadly, we just lost Preston Nichols, Karl Wolfe and Bob Dean in October 2018. They were not as fortunate.

Pete told me he is getting briefings on a daily basis, has had significant and healthy weight loss from precision dieting, and is doing much better.