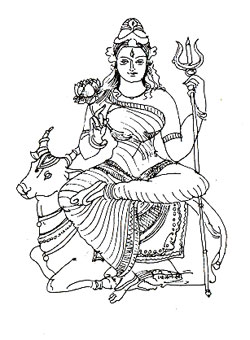 In this aspect, the first of the nine aspectss, the goddess DURGA is the daughter of Himvan, the king of the Himalayas. In a previous incarnation, she was SATI BHAVANI, the daughter of Deksheye and the consort of SHIVA.
When her father, Deksheye, conducted a traditional ceremony, he invited neither SATI, nor SHIVA. Yet, SATI came together with SHIVA at that ceremony, and her parents were hypocritical towards SHIVA and they flattered him. Since she could not accept this insult to her husband, to her parents’ desperation, SATI burned her own body through paranormal yogi powers. Thus, she was reborn as PARVATI or SHAIL PUTRI, the daughter of king Himvan. 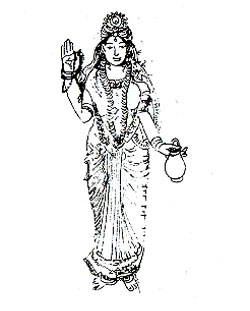 The name BRAHMACHARINI means “The one who practices austerity with dedication.” This second aspect of the goddess DURGA has an extraordinarily beautiful face which radiates with generosity and reflects the state of spiritual enlightenment of BRAHMACHARINI. In his right hand, she holds a rosary and in her left hand she holds a cup of water. She radiates happiness and bliss.
According to a legend, in a prior lifetime, she was SHAIL PUTRI, the daughter of Himvan. When she was playing with her chaperons, she was seen by NARADA, a very important priest from the godly realms. He studied her palm and she told her: “You shall marry the same yogi you were married to in your past lifetime, when you were SATI, but only if you will practice an austere form of asceticism.” Thus SHAIL PUTRI told her mother that she intends to marry SHIVA and only SHIVA and thus she prefers to remain a virgin. Then she left and headed to the woods where she practiced different yogi techniques and many TAPAS-es in solitude. Ever since, she was also known as UMA, and in the next life she was born as BRAHMACHARI. 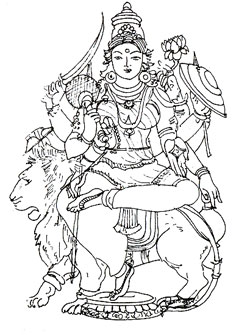 This third aspect of the goddess DURGA has an enchanting appearance. On her forehead, as an adornment of her tiara, she has a crescent, and one of the ritual objects she is wearing, there is also a small bell (GHANTI). Her body is golden. In some iconographic representations, she has three eyes and ten arms holding different types of weapons: dagger, sword, bow, arrows, shield etc. She rides a lion and she is ready for battle. CHANDRA GHANTETI is the apostle of courage. With the sound of her bell, she frightens all the demons and malicious human beings. 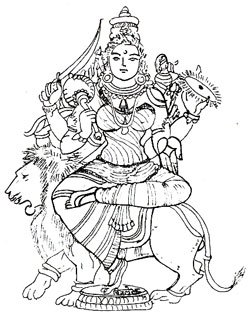 The fourth NAV DURGA aspect is KUSHMANDA, the one who gives birth to the entire universe through her smile. In the Macrocosmos, the focal point of her sphere of force can be found in the area of the Sun, and in the human body, her projection is at the level of the solar plexus (MANIPURA CHAKRA). In some of her traditional representations, KUSHMANDA has eight arms. In seven of them, she bears different weapons that are shining ominously and in her eighth hand she bears a rosary. Riding a lion, she is great, powerful, majestic and generous. The Hindu tradition mentions that for the worshiping of this aspect of DURGA, pumpkin gourd offerings are welcomed, since they are her favorite. This SHAKTI is described by the RUDRA YAMALA TANTRA as one of the most powerful universal feminine forces. 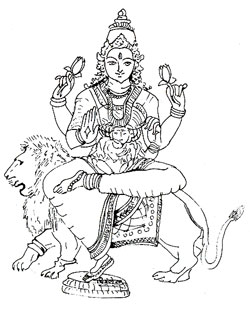 SKANDMATA means “mother of SKANDA”. This aspect, in the series of the successive manifestations of DURGA, is the one following BRAHMACHARINI. Through the force of her TAPAS, BRAHMACHARINI attracted the grace of SHIVA and, in a new auspicious birth, she became his wife once again. Their first new-born was SKANDA and that is why the fifth aspect of DURG is called SKANDMATA. SKANDA became the leader of the army of the gods. In the Hindu tradition, SKANDMATA is considered to be the Goddess of Fire and she is worshiped with the AGNI MANDALA. In symbolical representations, she rides a lion and she has three eyes, four arms, bearing beautiful lotus flowers in her arms. 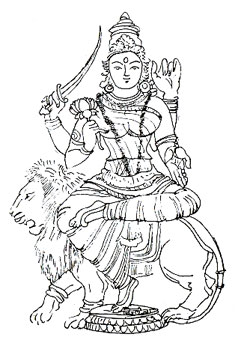 The great sage (RISHI) and anchorite KATAYAN, also known as VARRUCHI, was a fervent worshiper of DURGA. During a worshiping ritual, he asked the great goddess to incarnate as his daughter. In order to fulfill the wish of her worshiper, DURGA transformed into the daughter of KATAYAN and thus she was called KATAYANI. In this form, she was worshiped by the virgins of Vrindaban, on the shores of the Yamuna river, in order for their union with KRISHNA to be blessed. That is why, in Vrindaban, she is considered to be the protective deity of the respective region. She has a magnificent golden form, sometimes being represented with three eyes and four arms, bearing weapons but also a lotus flower and riding a lion. 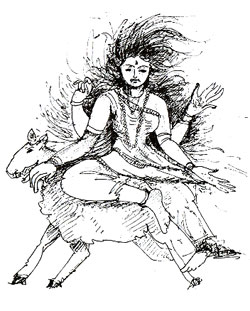 The seventh aspect of the nine is represented as a black “darkness colored” body with straggly hair. Her main adornment is a coronal that she wears around her neck which emits a brilliance which resembles electric sparks. She has three eyes, whose circular shape symbolizes the universe. From each of these three eyes, there are incandescent rays bursting with electrical brilliance. Flames burst out of her fiery nostrils. In traditional representations, she rides a donkey. In her right upper arm she bears a sparkling sword and with her other right arm she makes a gesture of blessing for her worshipers. In her left upper hand she carries a torch and with her other hand she makes a gesture symbolizing the banishing of fear, thus protecting her worshipers and giving them freedom from fear and troubles. Due to her virtue of giving kindness, she is also called SHUBHAMKARI.

The eighth aspect of the goddess DURGA is traditionally represented in the form of a young woman, with a light skin tone and childlike features. Her clothes and adornments are all white and bright. She has three eyes and she is riding a bull. She has four arms. In her upper right arm she holds a trident and with her other hand she makes the MUDRA of protection. In her lower left hand she carries a ritual drum and in her other left hand she makes a gesture of offering gifts for her devout worshipers. She is intelligent, peaceful and with a calm attitude. During her time of solitude that she spent in order become the consort of SHIVA, her body was covered in ashes and dust. SHIVA came to her and washed her body in the water of the Ganges, and it turned bright white and that is why she is called MAHA GAURI (the extremely white one). 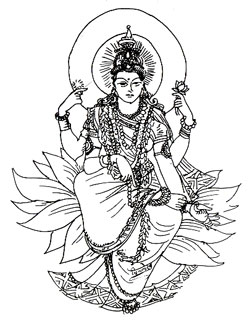 SIDDHATRI is the one who gives all spiritual accomplishments (SIDDHI, supernatural abilities) as a reward for her fervent worshipers. In DEVI PURANA it is said that SHIVA himself worshiped DURGA in this aspect and he was blessed by attaining all the SIDDHI-s. Through the blessing of SIDDHATRI, half of his body became feminine, he then became half man and half woman, and it was named ARDHANARISHWARA. SIDDHATRI is sometimes represented riding a lion, having four arms and blessing her worshipers. Tradition states that this manifestation of DURGA is worshiped by all the gods, sages (RISHI), saints, yogis and tantrics and it rewards them by offering them through her grace a state of exceptional and glorious spiritual realization.