Dozens of federal officials, along with senior social media executives, are finally being held accountable for colluding to suppress both the Constitutional and medical rights of US citizens. Could the as-of-yet unidentified ‘shadowy, foreign money group’ actors behind organizations such as the Center for Countering Digital Hate be next?

On March 21, 2021, a shadowy foreign group calling itself the Center for Countering Digital Hate (CCDH), published a document titled, “THE DISINFORMATION DOZEN: Why platforms must act on twelve leading online anti-vaxxers,” claiming that only 12 individuals are responsible for the majority of the anti-vaccine content online, namely, the document stated: “Just twelve anti-vaxxers are responsible for almost two-thirds of anti-vaccine content circulating on social media platforms.” 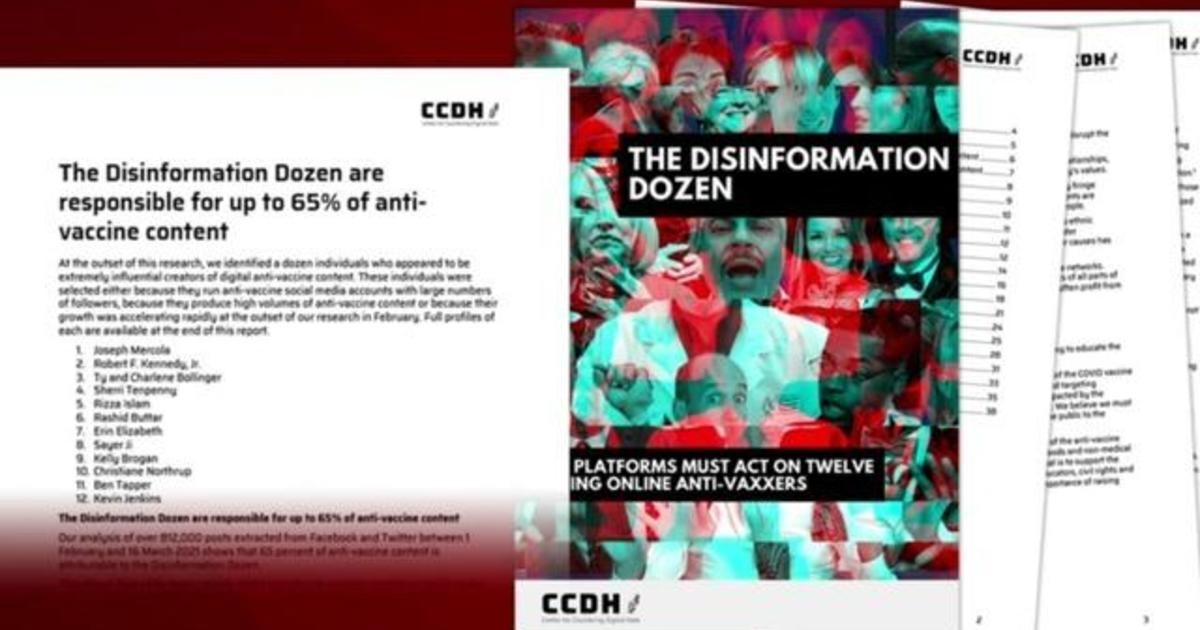 Since then, not only have thousands of news articles republished CCDH’s accusations, and used their document as justification to publicly defame, vilify and deplatform these individuals – including the White House press secretary, the U.S. Surgeon General, the President of the US, and 14 State Attorney Generals – but Facebook openly refuted CCDH’s statistics, both publicly in a statement given by their VP of Content Policy Monika Bickert on August 18th, and privately in an HHS email to a FB executive on August 8, 2021, proving them to be without any basis in fact.

Despite this, no apology or correction has been issued by CCDH, nor have any of hundreds of media outlets published a retraction of their defamatory statements. Furthermore, government officials who accused myself, and the other named individuals and organizations of egregious acts, including violence, have not issued any statement reflective of the new evidence that has been provided.

To the contrary, Homeland Security has issued National Terrorism Advisory System bulletins indicating that anyone who openly questions covid vaccine safety or efficacy may now be classified as a domestic terrorist. Until the origin lies, defamation, and depravation of rights we experience are openly addressed and remedied, many millions more Americans will likely face similar treatment, which may include warrantless surveillance, unjustified censorship, and perhaps more egregious sanctions such as debunking (which I have personally experienced since being targeted via Paypal and Venmo). 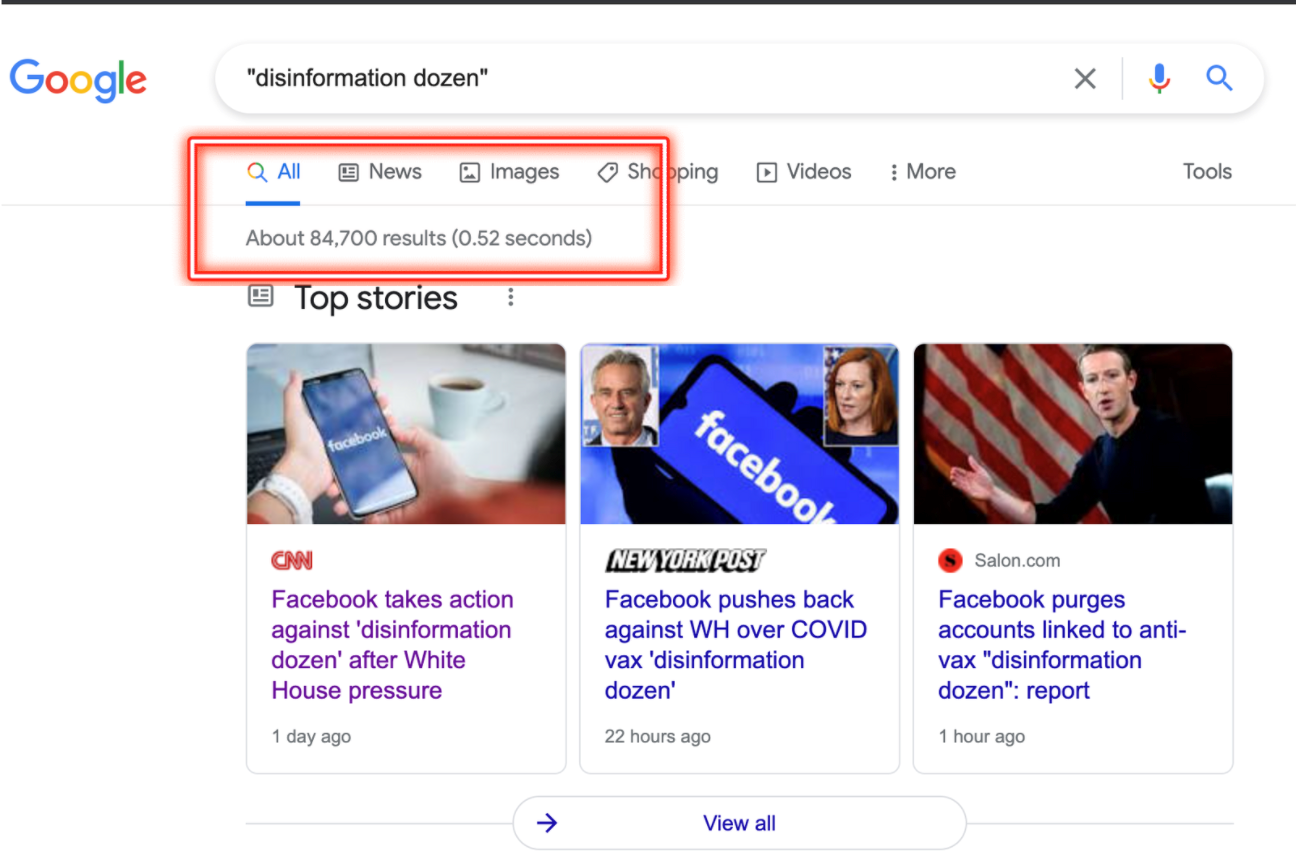 The good news, however, is that two new lawsuits are now shedding light on the actual disinformation agents behind the campaign to defame US citizens, such as myself, for exercising our First Amendment rights, and the right to informed consent. These include dozens of federal officials and senior social media employees who colluded, behind the scenes, to suppress the free speech of US citizens in such a way that it directly violated their access to information required for informed consent – a medical ethical principle established as a direct result of the Nuremburg trials in an international effort to prevent future medical atrocities from ever happening again.

As Greenmedinfo reported on Sept 17th,

“A lawsuit filed on August 31, 2022, by Attorneys General Jeff Landry of Louisiana and Eric Schmitt of Missouri alleges that at least 45 federal officials across multiple agencies within the Biden administration colluded with Facebook and Twitter to adjust their algorithms to ‘censor freedom of speech’ on a number of topics, including the COVID-19 pandemic. Google, Linkedin, and other tech platforms have also been implicated in this highly coordinated effort.”

The lawsuit’s discovery process revealed emails showing a vast “Censorship Enterprise,” indicating that the federal government (on behest of shadowy organizations and individuals within or behind CCDH?) specifically targeted, investigated, and deplatformed individuals and organizations like GreenMedInfo.com and Stand for Health Freedom.

Below is one “smoking gun” email revealing both their process of coordinating censorship, as well as their awareness that the information which presumably justified their actions not only did not exist, but were explicitly disproved by showing only .05% percent of vaccine related content on Facebook (not the 65% claimed by CCDH and the international media) was connected to our 12 accounts. That’s 1300 fold times lower vaccine-related content attributed to the 12 accounts than CCDH claimed! 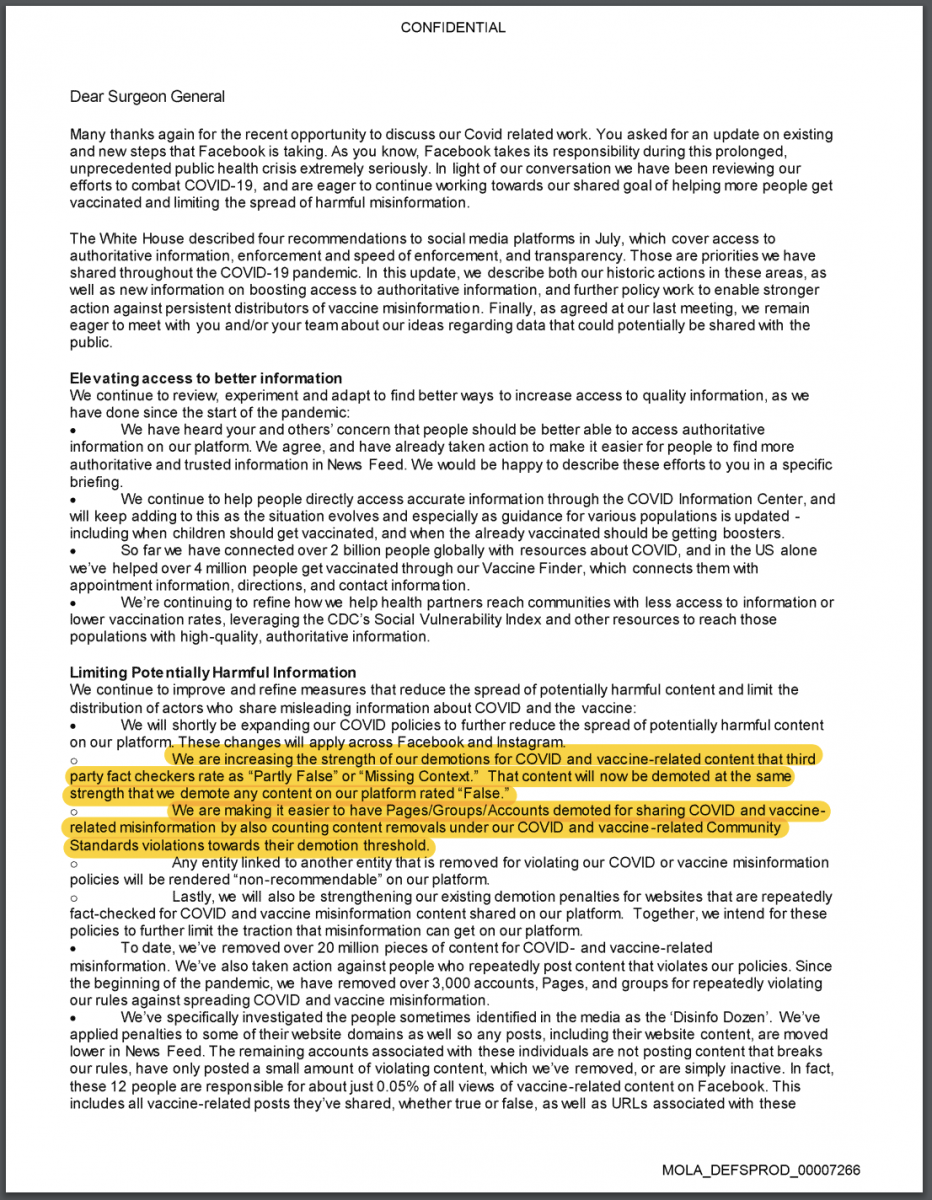 An article published on Epoch Times provides an update on Attorney General Jeff Landry of Louisiana and Eric Schmitt of Missouri’s lawsuit:

They also want to question five other officials, including Carol Crawford, chief of the Centers for Disease Control and Prevention’s Digital Media Branch.

While emails and other documents uncovered in discovery have revealed an ‘enormous and far-reaching’ censorship enterprise, the discovery ‘makes very clear that federal officials have frequently engaged in their most telling and probative communications with social media companies orally, not in writing,’ plaintiffs said in a joint statement with defendants.

‘Perhaps not surprisingly, the more senior the federal official involved, the more likely they appear to have been to rely on oral, rather than written, communications to pressure social-media platforms to censor,’ the statement also said.

Fauci, for instance, communicated in a long-shielded phone call with some scientists who went on to write a paper castigating others who were open to the theory that the covid-19 virus came from a laboratory in Wuhan, China, where the first covid-19 cases were detected.

Fauci was also in touch with Facebook CEO Mark Zuckerberg, but the content of oral communications between the two ‘is yet to be revealed,’ the new filing, dated Oct. 14, says.

Fauci has not made any statements under oath about his communications with big tech firms like Facebook, despite the judge overseeing the case ordering the government to provide answers from Fauci to questions, plaintiffs said.

Missouri Attorney General Eric Schmitt and Louisiana Attorney General Jeff Landry, the lead plaintiffs and both Republicans, announced recently they planned to seek depositions but had not identified any officials who they would seek to depose.”

A second major lawsuit filed in Texas against Big Tech censorship has received a favorable ruling and is likely to make it to the Supreme Court. You can learn more about it by reading a recent article published on Fox News titled, Federal court rules Big Tech has no ‘freewheeling First Amendment right to censor‘. 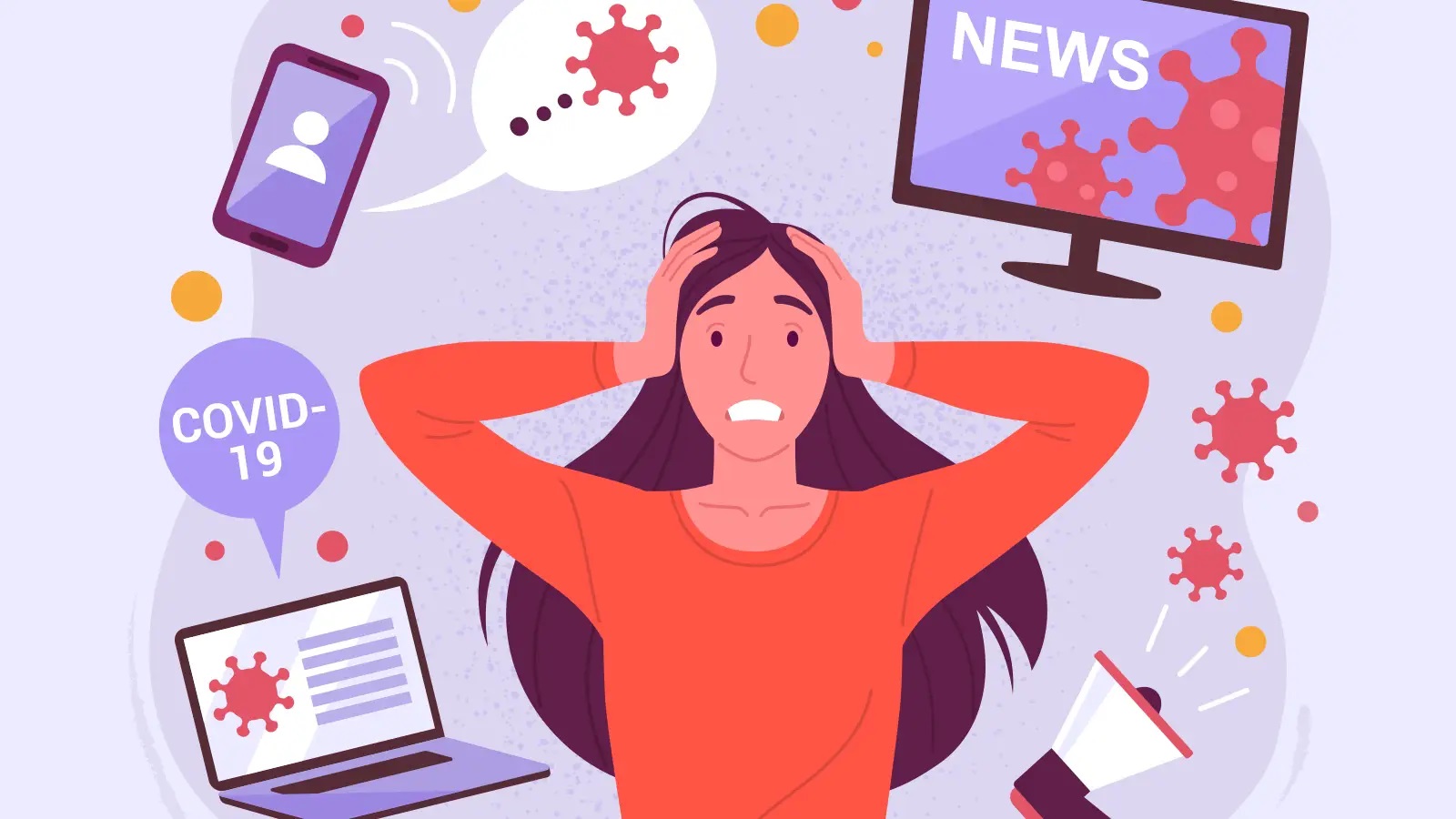 The public face of CCDH is a man named Imran Ahmed, whose organization was previously identified as meeting the definition of an extremist hate group in a two part investigative series first published on Off-Guardian you can read here Part 1 and Part 2. They write that the CCDH itself:

“….meet[s] the Commission on Countering Extremism’s definition of so called hateful extremists.”

Imran Ahmed’s organization is now notorious for inciting hatred and potentially violence against those who question the mRNA ‘vaccine’ safety or effectiveness by accusing them of actively profiting from ‘killing people.’

For instance, on a March, 29th, 2021 podcast named Doomed with Matt Binder, “The Anti-Vaxxer Disinformation Dozen (w/ Imran Ahmed),” Imran states that RFK Jr. is “…killing black people with the misinformation he spreads.” He referred to Sayer Ji as “selling death,” and accused the twelve individuals his organization is targeting as having a “psychopathological need… to cause pain and to cause chaos.”

Greenmedinfo have reported previously on how Imrad Ahmed has called for the criminalization of critical discussion related to vaccine safety and efficacy:

“I would go beyond calling anti-vaxxers conspiracy theorists to say they are an extremist group that pose a national security risk.”

It is also noteworthy that the public has pushed back against Imrad and CCDH’s egregious tactics, with thousands of social media comments defending the so-called “disinformation dozen,” and holding CCDH accountable for their hateful and potentially violence-inciting acts, including publishing a digital hit list, which was republished globally by mainstream news outlets.

Who is behind CCDH, and when will they be held accountable?

“For days now, the Biden’s Administration has said 12 people are ‘guilty’ of spreading #COVID19 ‘misinformation’ on social media. Who compiled this list for them? The Center for Countering Digital Hate. A foreign dark money group.”

This is an extremely important question to ask, considering how profoundly this London-based group (now also with a base in Washington, DC), managed to publish a factually baseless report that ended up being used as “evidence” accusing US citizens of “killing people”; and by the president of the US himself, not to mention the majority of the mainstream news organizations around the world. Who wields such immense power as to be both invisible and to direct and/or suppress the speech of hundreds of millions of people by influencing social media speech policies?

Until we answer these questions, we must accept that shadowy individuals and organizations outside the US are directing our political leaders and policies, including the censorship practices of Big Tech platforms that affect the rights of billions of people around the world to share and obtain information essential for informed consent, without any oversight or awareness.

Thankfully, all this may be changing, as we see numerous lawsuits (and subsequent discovery processes) reveal the behind the scenes collusion that can not and will not any longer be tolerated by We the People.