In the wake of renewed focus on the plausibility of the Wuhan lab leak of Covid-19, it has been noted that there was an outbreak of a DIFFERENT pathogen from another Chinese bio-facility at around the same time. 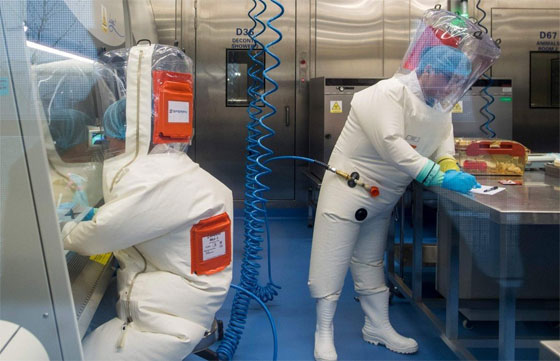 Reuters reported last year that “Brucellosis, a bacterial disease with flu-like symptoms, has infected more than 6,000 people in a single outbreak in northwestern China.” https://www.usnews.com/news/top-news/articles/2020-11-06/explainer-how-thousands-in-china-got-infected-ny-brucellosis-in-one-single-outbreak

The report further noted that “Usually caused by contact with animals, the outbreak in Lanzhou, the capital of Gansu province, was due to a leak at a vaccine plant, according to Lanzhou’s health commission. People are still being treated at hospitals even though the outbreak occurred a year ago.”

The report explains that the outbreak was “first uncovered in November 2019 when some students at the Lanzhou Veterinary Research Institute tested positive for brucellosis. By the end of December, at least 181 people at the institute had been infected, according to the provincial health authority.”

The bio-facility reportedly “used expired disinfectants in July to August 2019 to make brucellosis vaccines, leaving the bacteria in its waste gas. The contaminated gas later formed aerosols that drifted downwind to the veterinary institute.”

While the mortality rate from brucellosis is low, it can have permanent symptoms including chronic joint pain.

This report is extremely interesting in light of the coronavirus pandemic and intelligence findings indicating that workers in the Wuhan Institute of Virology were hospitalised with Covid symptoms, with some of their family also dying, in November 2019.

While the two events are clearly not linked, it highlights how lab leaks of potentially deadly pathogens are not uncommon in China, owing to lax safety standards.

Lab leaks have occurred multiple times from such facilities in China, with SARS escaping twice from the Chinese Institute of Virology in Beijing in 2004, one year after its spread was brought under control.

Former FDA head Scott Gottlieb has also urged that “These kinds of lab leaks occur all the time.”

Gottlieb recently warned that “In China, the last six known outbreaks of SARS-1 have been out of labs, including the last known outbreak, which was a pretty extensive outbreak that China initially wouldn’t disclose that it came out of lab.”

“It was only disclosed finally by some journalists who were able to trace that outbreak back to a laboratory,” Gottlieb explained.

The Financial Times reports that “some Chinese officials have warned about poor security at existing facilities. In 2019 Yuan Zhiming, the director of the Wuhan Institute of Virology’s BSL-4 lab, wrote a review of the safety deficiencies in China’s laboratories. ‘Several high-level BSLs have insufficient operational funds for routine yet vital processes,’ Yuan wrote, adding that maintenance costs were ‘generally neglected.’”

The report adds that Yuan warned “Due to the limited resources, some BSL-3 laboratories run on extremely minimal operational costs or in some cases none at all.”

As both Senator Rand Paul and former CIA director and secretary of state Mike Pompeo also warned recently, the Wuhan Institute of Virology is still up and running, and there is evidence pointing to its involvement with the Chinese military in bioweapons research.

The accumulating scientific evidence that points to a potential coronavirus lab leak, as well as China’s record on bio-security, and its constant stonewalling, warrants an adequate independent investigation, which hasn’t occurred.