Rosa damascena, commonly known as Damask rose, is one of the most important and medicinally useful members of the Rosaceae (rose) family. It is an ornamental plant widely used to make perfumes and is reported to have plenty of beneficial properties. According to multiple studies, Damask rose has anti-HIV, antibacterial, antioxidant, antitussive, hypnotic and antidiabetic properties. It has also shown relaxant effects on the tracheal chains of guinea pigs. 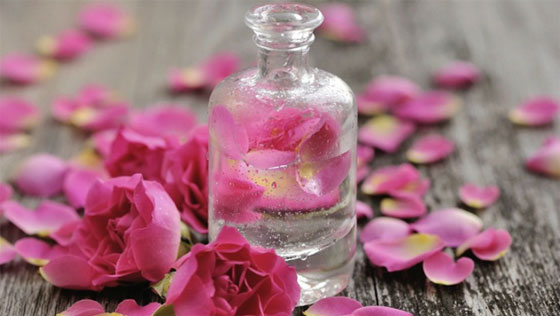 In many countries, Damask rose is often used to produce two products: rose essential oil and rose water. Because of its low oil content and lack of natural or synthetic substitutes, Damask rose essential oil is one of the most expensive oils in the world. Meanwhile, rose water, which contains 10 to 50 percent rose oil, is used for religious and medicinal applications, and is highly valued in the cosmetics and food industry, where it is used to make some special foods (e.g., floral-flavored ice cream and cakes, Turkish delight, puddings).

In a recent study, researchers at Teikyo University in Japan investigated two biological properties of Damask rose, specifically it’s antimicrobial and anti-inflammatory properties. They tested rose water made from high-quality Damask rose petals on two pathogens, namely, Candida albicans and methicillin-resistant Staphylococcus aureus (MRSA), which commonly cause skin infections. The researchers reported their findings in an article published in Biological and Pharmaceutical Bulletin.

Damask rose water is a natural antibiotic and anti-inflammatory agent

Damask rose is a multipurpose plant widely known for its culinary and medicinal applications, among other things. Edible parts of Damask rose are used in various cuisines, including its young shoots, petals, fruits, leaves and seeds.

Damask rose petals are used to make jams and add flavor to beverages, baked goods and desserts. They are also used for cooking dishes. Rosewater, which can be sweetened to produce rose syrup, is a byproduct of rose oil production. It is usually obtained by steam distilling Damask rose petals and taking the hydrosol portion of the rose petal distillate.

In different parts of the world, rose water, rose oil and a decoction made of Damask rose roots are used in traditional medicine for the treatment of various ailments, such as abdominal and chest pain, digestive problems and inflammation, especially of the neck. In North America, Indian tribes use the decoction as a cough remedy for children. Rose oil is used to treat depression and reduce stress and tension. Inhaling the vapor produced by heating rose oil is also believed to be an effective remedy for allergies, headaches and migraine.

Damask rose water, on the other hand, is traditionally used to treat skin conditions, such as erythema (skin redness), itchiness and swelling. To evaluate its antimicrobial and anti-inflammatory properties, the researchers tested Damask rose water against C. albicans and MRSA and assessed its effects on the function of neutrophils, which are white blood cells that serve as key regulators of inflammatory reactions.

The researchers reported that Damask rose water (2.2% solution) inhibited the mycelial growth of C. albicans and reduced the viability of MRSA within an hour of treatment. Damask rose water (5-15%) also suppressed the activation of neutrophils induced by treatment with lipopolysaccharide (LPS), a bacterial toxin; tumor necrosis factor-alpha (TNF-a), a cell-signaling protein produced by immune cells; and N-formyl-Met-Leu-Phe (fMLP), a macrophage activator.

Based on these findings, the researchers concluded that Damask rose water can reduce the pathogenicity of microbes and attenuate neutrophil stimulation, thus inhibiting skin inflammation caused by microbial infections.

This amazing lemon-garlic mixture is perfect for clearing heart blockages