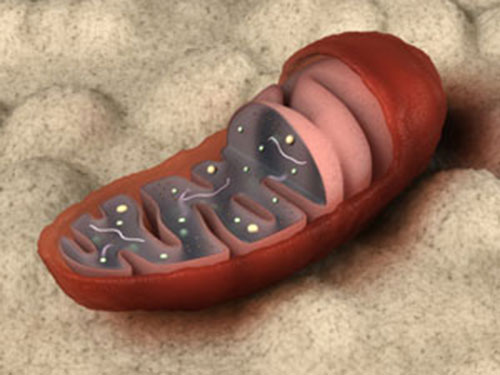 Cancer Thrives in An Acidic Body

In particular, fermentation by malignant cells facilitates the generation of acidic pH in cancerous tissues due to lactic acid production, a hallmark of aggressive cancer growth. Production of lactate begins to dwarf that of pyruvate, which results in less activity of the TCA cycle, and less generation of the energized intermediates NADH and FADH2 to fuel oxidative phosphorylation. What’s more, lactate accumulation promotes tumor growth by activating angiogenesis, or the formation of new blood cells to supply the tumor with nutrients, and by degrading extracellular matrix, which allows tumor expansion and augments potential for metastasis.

In addition, the adverse change in pH engender voltage differences in cell membranes, which may disrupt communication, cause electrical uncoupling, induce mitosis, and lead to further derangements in proton and electron efflux. Further, membrane potential disruption and consequent accumulation of a surplus of negative ions in the extracellular milieu repels erythrocytes and lymphocytes, shielding cancer cells from oxygen- and immune-mediated destruction, respectively. This sequestering effect and decrease in immune reactivity is compounded by the formation of coagulated proteins around transformed cells, which in turn prohibits access of host immune defenses to combat cancer.

Compared to the complete aerobic oxidation of glucose, which generates 38 ATP per mole of glucose, substrate-level phosphorylation via glycolysis is relatively energy inefficient, yielding only 2 ATP per mole of glucose. In addition to diminished internal resources of the malignant cell due to preferential use of glycolysis, cancer interferes with electrical impedance, sodium-potassium membrane pump function, and the enzymes of the respiratory complexes embedded within the inner mitochondrial membrane, such that intercellular communication and membrane dynamics are jeopardized.

These metabolic limitations, in concert with the decreased mitochondrial content, lead to an enormous reduction in energy reserve, with the average cancer cell having less than one-twentieth the energy of a healthy cell. Hypoxia-inducible factor (HIF), which is activated as a consequence of the hypoxic microenvironment in which cancer develops, up-regulates expression of glucose receptors and glycolytic enzymes in attempt to reflexively compensate for the diminished efficiency of glycolysis compared to oxidative phosphorylation.
In sum, incessant cellular insult, as a result of the micronutrient depletion, sedentary lifestyle, psychosocial stress, and toxicant exposure to which most of us are subjected, culminates in a transformed cell phenotype where cellular apoptotic mechanisms are compromised and cellular metabolism becomes deranged. Hence, cancer arrives on the scene as an adaptation to the traumatic living circumstances of modernity.

Restoration of mitochondrial function is of the utmost importance, since mitochondrial remodeling, or mitochondrial dysbiosis, defined as the process whereby “mitochondria can dissolve their symbiosis with the cell host, and no longer function in harmony with the cell” is a distal molecular pathway common to all cancer cells. Instead of treating cancer like a foreign entity to be eradicated, cancer should be re-conceptualized as cells that have lost their way, and have begun operating as unicellular, independent entities, profligately replicating and forming a protista colony of sorts as a survival mechanism. In this model, cells need to be supplied with the proper conditions to be coaxed back to their normal phenotype, re-differentiate, and regain local tissue communication and architecture.

Dr. Michael Gonzalez and colleagues reiterate these foundational principles of Nobel laureate Szent-Györgyi with “Efficient oxidative energy production is associated with organized cell structure, whereas fermentation is associated with lack of structure and the inclination to cell division”. Because the cardinal difference between normal and cancer cells is the use of fermentation by the latter to meet energy demands, restoring aerobic respiration, or correcting mitochondrial function to promote induction of apoptosis in cancer cells, should be clinical priorities, rather than decimating the very immune defenses that fight cancer with radiation and chemotherapy. 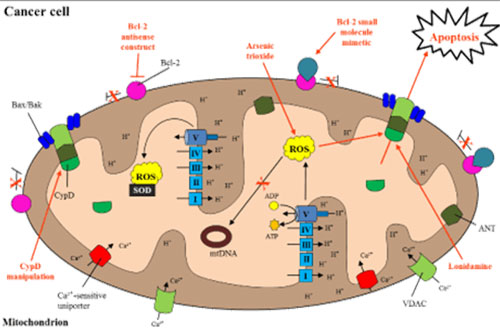 Therefore, undertaking a program of mitochondrial correction, including a nutrient-dense, paleolithic diet to which our physiology is accustomed, and nutraceuticals needed for aerobic respiration, repolarization, and membrane repair, could potentially reverse cancer. This phenomenon is illustrated by the observation that suppression of mitochondria promotes cancer growth in normal cells, whereas inhibition of glycolysis leads to rapid death of cancer cells. Likewise, animal models and in vitro studies have illuminated decreased rates of tumor growth with normalization of mitochondrial function.

In light of the observations that white blood cells kill cancer cells by injecting them with oxygen in the form of hydrogen peroxide, and that depleting oxygen induces cellular mutation, one of the clinical objectives of cancer treatment should be increasing cellular oxygenation. Promoting oxygenation, and hence better detoxification, through therapies such as hyperbaric oxygen therapy (HBOT), will promote down-regulation of the expression of cancer-related genes such as HIF-1. 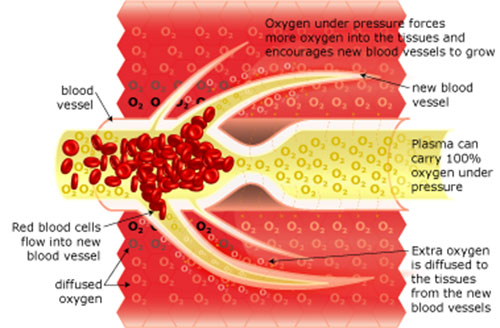 In addition to inhibiting tumor growth, depleting blood vessel density within mutated cells, and promoting expression of anti-cancer genes in animal models, hyperbaric oxygen therapy up-regulates production of ROS by tumor cells to enhance efficacy of the standards of care. In a mouse model of metastatic cancer, the ketogenic diet in concert with hyperbaric oxygen therapy led to significant decreases in blood glucose and tumor growth rate and produced a 77.0% average increase in survival time compared to controls. Quintessentially, by increasing delivery of oxygen to tissues independent of hemoglobin oxygen saturation, hyperbaric oxygen therapy has the potential to restore aerobic respiration over the substrate-level phosphorylation that occurs in glycolysis.

Furthermore, a cancer-mitigating diet should be rich in micronutrients needed to sustain the biochemical pathways that extract and convert energy from organic molecules into biologically accessible forms. Restoration of oxidative respiration will cause the synthesis of oxidation byproducts, which normally translocate from the cytosol to the nucleus, influencing gene expression in a way favoring re-differentiation away from the primitive mutagenic phenotype.

Targeted orthomolecular use of mitochondrial support, such as alpha lipoic acid, acetyl-L-carnitine, coenzyme Q10, magnesium, D-ribose, PQQ, creatine, and B complex may also be warranted. Phospholipids replacement therapy is also integral to mitochondrial repair since damage to the lipid bilayer and to the dual-layered mitochondrial membrane precedes mitochondrial damage. Further, ascorbate, or vitamin C, administered intravenously in particular, may restore normal apoptosis in cancer cells by augmenting electron flux, increasing generation of ATP, and facilitating re-differentiation to a normal phenotype.

Lastly, exposure to mitochondrial toxicants, such as xenobiotics and persistent organic pollutants which damage the mitochondrial membrane, should be minimized. Importantly, medications such as psychotropic drugs, analgesics, anti-inflammatory agents, antibiotics, anticonvulsants, statins, steroids, chemotherapy, and drugs for diabetes and HIV/AIDS are major contributors to mitochondrial damage. Although many medication side effects and drug-induced toxicities are a direct consequence of mitochondrial dysfunction, the U.S. Food and Drug Administration (FDA) still does not mandate mitochondrial toxicity testing for pharmaceuticals.

According to Neustadt and Pieczenik (2007), medications can directly disable elements of the electron transport chain, inhibit transcription of electron transport chain complexes, or inhibit the enzymatic processes involved in beta-oxidation or glycolysis. Pharmaceutical drugs can also deplete endogenous antioxidants or nutrients required for mitochondrial function, or generate free radicals which damage mitochondrial structures.

Where Oncology is Failing, Mitochondrial Regeneration Can Succeed 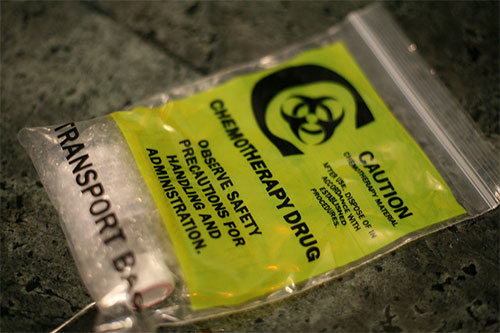 The decision to use toxic chemotherapy, radiation, or trauma-inducing surgery – the only legally sanctioned cancer therapies, fraught with conflicts of interest and vested fiscal agendas – is a personal one, and should be made in concert with a licensed physician and your intuition as a guide. However, studies have shown that the percentage increase in five-year survival rate due to adjuvant and curative cytotoxic chemotherapy is only 2.1% in the United States and 2.3% in Australia. Another comprehensive analysis of over 3,000 clinical trials determined that there is no direct evidence that chemotherapy prolongs survival in advanced carcinoma, apart from small-cell lung cancer.

Researchers state: “Many oncologists take it for granted that response to therapy prolongs survival, an opinion which is based on a fallacy and which is not supported by clinical studies”. In other words, tumor shrinkage does not translate into survival advantages over “watch and wait” approaches in many cancers. Further, because chemotherapy and radiation do not target the self-renewing cancer progenitor cells known as cancer stem cells, secondary cancers that re-emerge are usually more aggressive and fatal. In fact, radiation generates therapy-resistant cancer stem cells, such that lingering cancer cells become more malignant.

A more holistic vantage point should be adopted regardless of the therapies a cancer patient employs, addressing latent infections, micronutrient and fatty acid deficiencies, hormonal imbalances, toxicant exposures, dysbiosis, inflammatory underpinnings, psychospiritual stress, and mitochondrial insufficiency, all of which contribute to a hostile, threatening environment which cause cells to harken back to a pathological, undifferentiated, cancerous phenotype.

Researcher and clinician Dr. Michael Gonzalez, who is using some of these targeted therapies in his clinic, has witnessed better quality of life and increased survival time in cancer patients compared to use of conventional therapies alone. He states: “I truly believe that the bioenergetic theory of carcinogenesis describe the root of cancer… and will pave the way for a new understanding of cancer as a metabolic mitochondrial disease, leading to more effective, less toxic, and user-friendly treatments”.

Here’s what dogs see when they watch television