Shingles, also known as “zoster” or “herpes zoster,” will affect roughly one out of every three American adults during their lifetime. Estimates suggest that there are upwards of one million cases of shingles each year in the United States. The disease is caused by dormant varicella zoster virus – the same virus that causes chicken pox. It is fairly well known that a history of having had chicken pox puts you at risk of developing shingles in your elder years.

But, did you know that the shingles vaccine could raise the risk of someone else getting chicken pox?

The team conducted an analysis of 36 male and female participants, all of whom were over the age of 60. To begin, all of the subjects were given a vaccine for shingles that was created by the pharmaceutical giant, Merck. The vaccine, known as Zostavax, contains live, attenuated varicella zoster virus (VZV).

The scientists note that the vaccine package’s insert notes that recipients should avoid contact with newborn infants, pregnant women who’ve not had chicken pox, and immuno-compromised individuals for an unspecified amount of time following inoculation. 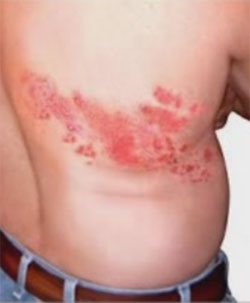 So, what did they find? Exactly 50 percent of the skin samples taken from the injection site within ten minutes of the inoculation’s administration tested positive for VZV. The team says that this potentially could indicate the presence of infectious disease on the skin within minutes after vaccination.

According to the research team, the presence of VZV DNA in saliva for up to 28 days after vaccination suggests that there is a potential for people who have recently received the shot to transmit VZV to other people.

These findings are honestly not that surprising; the potential for live virus vaccinations to cause disease is simply something that often gets overlooked by the general public. It is not just the shingles vaccine that is worrisome; there are plenty of other inoculations out there that can also actually spread disease as well.

Some healthcare organizations seem to acknowledge the risks of vaccines, at least to those who are at a disadvantage. As Mike Adams notes, for immuno-compromised patients, the Johns Hopkins Patient Guide cautions against contact with children who have been recently vaccinated and to “Tell friends and family who are sick, or have recently had a live vaccine (such as chicken pox, measles, rubella, intranasal influenza, polio or smallpox) not to visit.”

At St. Jude’s, children undergoing cancer treatment are given a similar set of suggestions – and it’s easy to see why. Scientific evidence continues to show that when a person is vaccinated with a live virus inoculation, they can continue to shed that virus for weeks.

And as The Health Ranger points out, the risk of transmission, and subsequent infection, applies to everyone – vaccinated or not.

The Coming Shift to Cosmic Fascism (1)