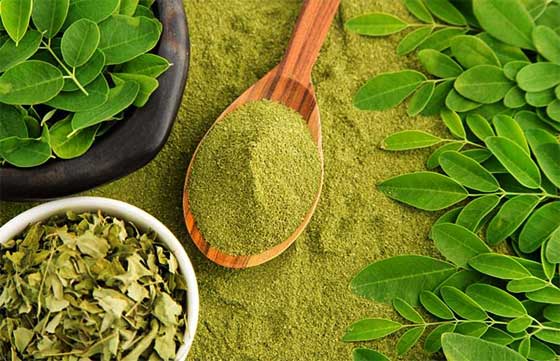 Moringa is a tree native to India, Bangladesh, Pakistan and Afghanistan. There are several different species, but the most common and widely consumed is Moringa oleifera. This is sometimes referred to as “the miracle tree.” It is also called the “tree of life,” “mother’s milk,” “drumstick tree” or “horseradish tree.”

The tree is fast-growing, drought resistant and can reach 40 feet in height. Nearly every part of the plant is edible and has medicinal qualities. However, it is the pods, leaves, flowers and bark that are most frequently used. It is valued in Ayurvedic therapy for a range of uses including for its anti-inflammatory, antifungal, antiviral and antidepressant properties.

The bark of the tree is thick and white-colored and the leaves are long and oval-shaped. The tree has been used since ancient times, valued by the Greeks and Egyptians. Currently, several humanitarian organizations are encouraging growth in rural communities to help combat malnutrition.

The plants grow so quickly that within six months of planting a cutting, the first harvest can be taken. By the second year, one tree can produce nearly 300 seed pods that might be parboiled and added to curry or roasted and eaten like nuts.

Moringa tea can be made from dried leaves, seeds or flowers, but dried leaves are the most popular. While Moringa tea is frequently consumed in India, only recently have the benefits of the tea reached the Western world. About 1 teaspoon of dried loose-leaf tea is used in 1 cup of freshly heated pure (not distilled or flavored) water. For added health benefits and a different flavor, pursue blending it with some green tea.

Other health benefits from Moringa plants are the unique glucosinolates that are not found anywhere else. A glucosinolate is an inert sulfur-containing phytochemical that is most notably found in cruciferous vegetables like Brussels sprouts, broccoli and cabbage.

According to one paper in Scientific Reports, Moringa contains not only high-levels of glucosinolates, but a unique formulation that is responsible for many of its medicinal properties. When glucosinolates are metabolized by an enzyme called myrosinase they produce a bioactive isothiocyanate compound.

The isothiocyanate found in broccoli and many other cruciferous vegetables is sulforaphane. However, the unique glucosinolate (glucomoringin) found in the Moringa plant is metabolized to moringin. Researchers recently discovered a new glucosinolate in wild forms of Moringa oleifera called 4-(-L-glucopyranosyloxy) benzyl GS (4GBGS). Domestic forms of Moringa oleifera grown for human consumption had some levels of 4GBGS, but in much lower concentrations.

The researchers speculate that this may be due to breeding the plant to reduce the naturally bitter taste. Since glucosinolates contain sulfur, they have a distinct, sometimes off-putting flavor. In addition to glucomoringin and 4GBGS, Moringa oleifera also contains at least 10 other glucosinolates that work together to provide many of the health benefits of the plant.

According to Jed Fahey, a nutritional biochemist from Johns Hopkins Bloomberg School of Public Health, the overall nutritive value of the Moringa tree has led to widespread use to reduce the burden of undernutrition. In 2009, he wrote: “However, scientifically robust trials testing its efficacy for undernourished human beings have not yet been reported. If the wealth of anecdotal evidence (not cited herein) can be supported by robust clinical evidence, countries with a high prevalence of under-nutrition might have at their fingertips, a sustainable solution to some of their nutritional challenges.” 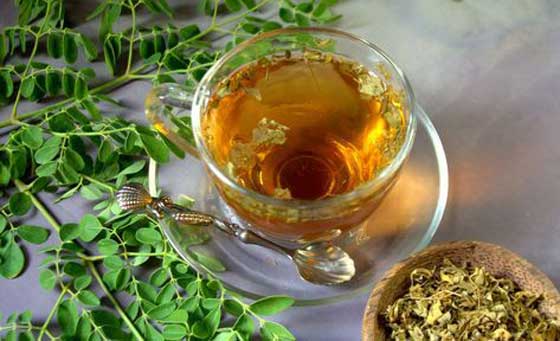 Many of the benefits associated with drinking Moringa tea are likely the result of the nutritional profile, including the unique glucosinolates discussed above. Additionally, the plant is rich in vitamins, minerals and essential amino acids, which are protein building blocks. According to the U.S. Department of Agriculture, 100 grams of the pods contain 45 milligrams (mg) of magnesium, 15 mg of phosphorus and 461 mg of potassium. They are also rich in zinc, vitamin C, folate and vitamin A.

There are not a lot of plant foods that contain all the essential amino acids, but Moringa is one. According to the African Journal of Biotechnology, the plant has 19 amino acids, including all nine essential amino acids. Each of these have important biological roles including helping to stabilize blood sugar, used in the production of collagen, necessary in the production of red and white blood cells, and playing a role in memory formation and nervous system function.

The anti-inflammatory effects from Moringa may also help protect your skin from pollution. Moringa leaves are rich in antioxidants that contribute to healthy skin as well as sulfur, which is a key ingredient in the production of collagen and keratin.

Moringa oil, pressed from the seeds of the tree, keeps for years without turning rancid and is easily absorbed into the skin. Although the product has not gained widespread popularity, there is evidence that it helps reduce wrinkles. The oil is also naturally moisturizing and nourishing.

Use caution when ingesting moringa

It is important to remember that certain plants like Moringa are bioactive and may interfere with medications or supplements you’re taking. The leaves are considered generally to be safe and edible, but there is slight controversy about the roots and stems. The information about using Moringa before or during pregnancy, or while nursing, is also unclear. Until there is more evidence that Moringa is safe during pregnancy, women who are pregnant or who want to become pregnant should not use it.

Early studies have also demonstrated there’s an immunosuppressive effect from the seeds or extracts that contain the roots and seeds. The plants can also have a mild laxative effect.

Since Moringa has an effect on blood sugar, inflammatory response and may interact with other medications, it’s important to first check with your pharmacist, inform your holistic physician of the addition and monitor your blood sugar frequently if you are a diabetic.