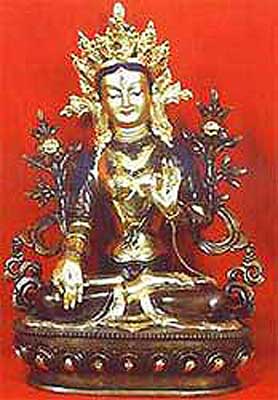 In the Hindu Tantric pantheon Tara is the second Great Cosmic Power and she is also the most important and most worshiped deity in the Tibetan Tantric Buddhism (Vajrayana path). The most frequent and complex references to this cosmic power (Tara) are found though in the Tibetan Buddhist tradition, where she is known as Tarini. In this tradition, numerous forms of the goddess are presented as many different aspects or functions of Tara, signifying the particular elements of this highly elevated expression in the manifestation of divine consciousness. In addition, the invocation and worship (puja) of Tara is closely correlated (in the Tibetan tradition) with the complex pantheon of the five “Families” of divine creative energies and therefore of the five Dhyana Buddha-s. In such circumstances it is very difficult to be able to make a precise equivalence between deities (group of deities) which are associated with the main features of Tara and the great cosmic power which is presented in the Hindu tantric tradition.

We present below different aspects and facets of the Great Cosmic Power and Goddess, as they are found in different traditions and cultures of the world. This extensive material will be structured in subchapters that we invite you to read carefully, since they reveal the whole splendor and grandeur of this magnificent Cosmic Power, which is Tara:

1. Hypostasis and tasks of the Great Cosmic Power Tara
Generally speaking, the forms of representation of the goddess Tara are presented in various texts of Hindu and Tibetan spirituality in about the same terms. However, there are differences, especially in terms of the objects the goddess holds in her hands. The Sadhanamala Tantra text describes a long series of such “Tara goddesses” which emanate from the gigantic sphere of consciousness of the great Dhyani Buddha (or Jina) Amoghasiddhi. Read full text here…


The legends and myths of different cultures talk about The One Who Gives Life, The One That Is Full of Wisdom, the Great Cosmic Power of Compassion, and Light of Heaven. She is known under various names and revealed under many aspects. Her worship has been carried on until today in the traditional schools of Asia. Read full text here…


3. Hymns of praise dedicated to the Great Cosmic Power Tara

“O, Divine Mother Tara
You who create everything,
Supreme Power
of the infinite universe.
Shining like a star
With Your eyes shining like lightning…”
Read the continuation of the anthem here…

4. The meaning of her name. The primordial soundWhen we relate to different aspects of our life and existence, the Great Cosmic Power Tara covers a wide range of activities that comprise both the human microcosm and plane, and the plane of the entire macrocosm. Thus, Tara represents in the divine plan of Creation the divine purifying force of breathing itself which is a vital process for any living being. Read full text here…

5. Tara worshiped in different traditions. Practical ways of worship
Terra, Tar, Ishtar, Tarahumara are all names of the Great Goddess Tara, as they are found in various traditions of the world cultures. Her multiple representations have been found scattered throughout the globe since ancient times. One way to worship the Great Cosmic Power Tara is by invoking Divine Grace to save and liberate all beings from manifestation, i.e. begging the Great Cosmic Power Tara to pour Her endless compassion in the heart of each beings of God’s creation. See further text here…

Tara is generally represented seated on a lotus throne with her right foot hanging, wearing the ornaments of bodhisattva-s and holding a dark blue lotus (utpala). She is represented as having three or seven eyes, making different mudras with her four hands or holding different objects. Read full text here…


You can see here her numerous representations…


8. The yantra of the Great Cosmic Power Tara

A Yantra is a simple geometric diagram that summarizes the essential symbolic characteristics of a certain major Cosmic Power or of a deity or a certain divine energy of the macrocosm. It is used in order to achieve spiritual telepathic consonances with the consciousness or the reality of that force sphere, being an essential symbol of her divine features, her powers and of certain fundamental aspects. See here the yantra of Tara…

The dynamistograph – a tool that enables communication with the spirit world

The ten great wisdoms of God the Father