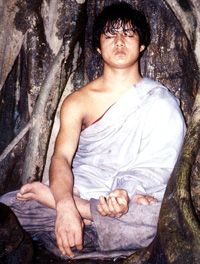 Born on May 9th 1989, he went into a state of continuous meditation on May 16th 2005 and disappeared without a trace on March 11th 2006. Ram Bahadur Bomjon bewildered us all at the mere age of 16. His eyes closed, motionlessly seated in a yogi position in the shadow of a tree in the Bara jungle, 150 km from Katmandu, the Nepalese capital. No water, no food. Just plain ceaseless meditation. He remained like that for almost 10 months. Meanwhile Bara turned into a place of pilgrimage because people believe the young man to be the incarnation of an ancient master.

Pilgrim’s fervor increased spectacularly when Ram got bit by a snake. A curtain was laid around him and then lifted five days afte,r when he said: „I snake has bitten me but I need no treatment. All I need is six years of deep meditation.“

No water, no food, no sleep – this young man’s case aroused the skepticism of some yet also drew the scientists’ attention. A research group from the Nepalese Royal Academy of Science and Technology was required to conduct a challenging study: keep the young yogi under surveillance yet not touch him at all. “Five meters away from him, all we can do is acknowledge that he is alive”, one of the researchers claimed. Meanwhile an incense sticks vendor from on of the nearby counters added: “At least scientists will be able to see whether the boy is indeed meditating all night long.“

People pray for his return

Yes, incense sticks vendor. Because during those ten months, Bara turned into a miniature mall, with all sorts of souvenirs: from perfumes to key holders and T-shirts with the teenager’s face printed on them. “We gathered over 7,000 dollars in our bank account only, besides direct donations from the visitors,” the local mayor stated. Locals have organized a group to supervise the crowd. They did not allow anyone to come within 15 meters, except for the scientists. They helped preserve peace so that people would interfere with his meditation as little as possible. 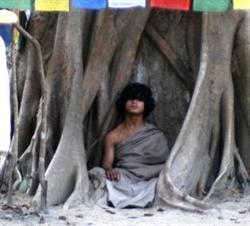 However one Saturday, March 11th, Ram Bahadur Bomjon disappeared. Whether he was kidnapped or decided to leave himself – we still don’t know it until today. Only his clothes were found. More than one thousand people attended the police investigation. The boy was searched along an area fifteen kilometers wide all over the jungle. Again and again. With no results. The authorities claim that the young man decided to leave by himself. Probably chased away by the crowd rumor, by the thousand of intrigued eyes and maybe even by the commercial development in Bara.

News posted on www.nepalnews.com claims that the young man was seen the very next day following his disappearance in a forest called Gopeni, a few kilometers from Ratanpuri, also in the Bara jungle. He was accompanied by seven members of the organizing group to whom he allegedly said he would return in six years time and meanwhile he asked them to meditate in the place where he had stayed for the past ten months. Then he disappeared again. We cold not prove the news authenticity. It is however a given fact that currently, both the Hindu monks and the Nepalese Buddhists pray for the return of the teenager who astounded people worldwide.

Ram Bahadur Bomjon reminds us of Balayogi, a great Indian yogi born on 1930, who spent his entire life in samadhi. Completely silent, in a meditation position, without eating or drinking, his body gaining weight nevertheless. Around him people built a temple whose doors would only open once a year, every Mahashivaratri. The essence of his teaching, comprised in 18 verses is expressed through the following words: „Man is above all called to perfection, just God Our Father is forever perfect in heaven.”

Before his death, Balayogi predicted the following: „During the centuries to come, in the delta of the sacred Godovari river, seven more Balayogi will be born. Starting from the age of 6 -7, they will do the meditation tapas [Balayogi followed] for many years in a row and in their next life following this asceticism, they will become kings.“

Bhuvaneshwari’s physical beauty radiates out of her inner splendor