The filthy and shocking secrets of Vatican City


The 265 popes there have been until now have not all been immaculate beings, not even remotely. And the Vatican has not always been an environment of humbleness and spiritual elevation, as one might first think. Murders, incests, schemes, deceits, here are just a few of the disgusting and skillfully hidden stains on the history of papacy.

Spiegel magazine has taken an indiscreet look into and revealed some of the scandalous events from the past of Vatican City, which have been kept perfectly hidden up to this day. 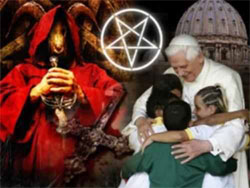 Murders, incests and pornocracy in the “Holy City”

John VIII (872-882) was the first pope murdered “on duty”. Archived documents state he passed away after enduring excruciating pain, having been beaten up and then poisoned. His tragedy was to be the beginning of a series of eight such murders of pontiffs sitting in the Chair of Saint Peter.

The story of John XII (955-964) is also shocking. He is remembered for breaking up families, incest, his passion for gambling, blasphemy and murder. And in 963 he was dismissed for shameful behavior. It seems he was killed a year later by the husband of one of his mistresses.

Another fan of having affairs with married women was Pope Leo III (795-816). Due to this “weakness”, he was followed by the supporters of his predecessor, Adrian I, and pushed off his horse during a procession in 799. His enemies tried to cut off his tongue and pull out his eyes, but he escaped and managed to find protection at the king of the Franks, Charles the Great, whom the pope was to crown Roman emperor on Christmas day, 800.

However, it was not unusual for the pontiffs to have mistresses. On the contrary, if we think of Rodrigo de Borja (or Borgia in Italian), the future Pope Alexander VI, who had 9 children from different love affairs. True, five offsprings – among whom the frightful Cesare and Lucrezia Borgia – were given to him by Vanozza Catanei, a roman noble lady, who was his concubine. This head of Church, elected by a corrupt conclave, stands today as a symbol of unscrupulousness, favoritism and immorality. To him, more important than the interests of the institution he was shepherding was to increase his own power and to profitably marry his children.

The mistress’ influence on Church was not a rarity either. Especially Theodora, the wife of Consul Theophylact, marked the history of papacy by successfully promoting her lover, the Archbishop of Ravena, on the pontifical seat and establishing the so-called “pornocracy”.

Her daughter, Marozia, became the mistress of Pope Sergius III when she was only 15, then got married three times in order to strengthen her influence. Unbelievably, her son, John XI and her nephew, John XII, would also become head of Church. Also, Popes Benedict VIII, John XIX and Benedict IX were also her heirs. 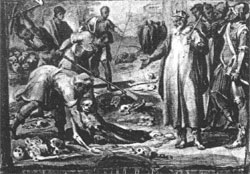 The corpse that was judged and then sentenced !

Regarding deceit – even with a noble purpose – Pope Stephen II (752-757) proved to be a master. In a meeting with the Frank king, Pepin (dubbed “the Short” because of his stature), the pontiff presented a forged document which granted the security of Rome as property of the Holy Chair. The pope showed Pepin, the father of Charles the Great, a document which he claimed to be the donation of Emperor Constantine. In fact, the document had been forged and backdated by Stephen II himself.

King Pepin, being illiterate, was very much impressed with the paper in question and offered the pontiff the protection he wanted. Pepin the Short gave the pope the territories around Rome, conquered from the Lombards (the exarchate of Ravena and the duchy of Rome). This gift, known in history as the “Donation of Pepin” (756), seals the alliance between the head of Church and Pepin, who reformed the Frank Church under the pope.

More shocking than Stephen II is the case of Pope Formosus (891-896). Accusing him post mortem of usurpation, his successor, Pope Stephen VI (896-897), ordered his disinterment, removing of his pontifical garments and cutting off of the fingers he used to bless the people with; then, the body was thrown in the Tiber and Formosus was declared perjured and illegitimate. Subsequently, Stephen VI himself was imprisoned, then poisoned and strangled. Pope Romanus, the successor of Stephen VI, and then Pope John IX vindicated the memory of Formosus.

He was elected pontiff at the age of 12, then he was dismissed twice 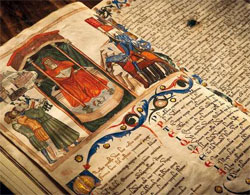 It seems that a certain Stephen was erased from the list of popes. He died only 4 days after being elected, in 752, being seized with apoplexy even before the ceremony of coronation. The predecessor of John Paul II, John Paul I, has not had the position for more than 33 days either, dying in a suspicious way, from a heart attack caused by poisoning, as it was stated in the media. There still is a flow of information about this sudden death that is said to have in fact been caused by poisoning.

Another record, the election of Pope Benedict IX, in 1032, when he was only 12! He was the nephew of Pope Benedict VIII (1012-1024) and Pope John XIX (1024-1032), and member of a powerful family. When Pope John XIX died in 1032, Benedict’s father, Alberic, influenced his election through bribery, manipulation and threats. Benedict IX was dismissed twice, after several scandalous schemes, but skillfully came back. One of his successors, Clement II, died of poisoning, probably by Benedict IX’s men, who becomes pope, but Henry III, king of Germany, crowned Holy Roman Emperor, dismisses him, anointing Pope Damasus II. John XII (955-964) was also very young when he became head of Church: he was only 16-17 years old.

Popes that have been kidnapped, exiled and subjected to forced labour 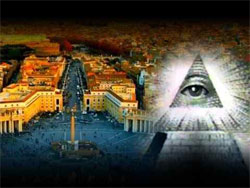 However, Pontian (230-235) was the first pontiff to resign. During the persecution of Christians under emperor Maximinus Trax, St. Pontian was exiled to Sardinia and sentenced to work in salt mines. This is why he resigned papacy on the 28th of September 235. St. Pontian died as a martyr in 236 or 237 due to the sufferings he endured in the mines.

Another pope who resigned was St. Celestin V, elected on the 5th of July 1294. Being 84, he could not put up with the pressure from the nobility of the time, so on the 13th of December 1294 he resigned and went back to the monastery. His successor, pope Boniface VIII, sent him to prison in order to prevent him from coming back to the throne.
On the other hand, St. Silverius, who was consecrated on the 1st of June 536, was the first pope forcefully dismissed. In March of 537, the Byzantine empress Theodora had him arrested and sent away from Rome for not having granted the appointments of the heretical bishops she had made. The pope was exiled on Palmaria Island where he remained prisoner untill his death on the 11th of November 537. The same happened to Martin I in 649.

Other less known oddities in the history of papacy 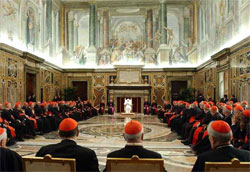 The complicated history of papacy has also known a case of title “inheritance”. Pope Innocent I (402-417) followed directly his father, Anastasius I (399-401). At the time, the rule of celibacy for the pontiffs did not yet exist.

It has also happened for three popes to simultaneously coexist! Thus, at the end of the 14th century and beginning of the 15th century, having barely come to Rome, Pope Gregory XI died, and the French cardinals wanted to elect a French pope, but the Italians, supported by the people, wanted a pope from their own nationality. Thus there got to be two popes, one at Rome, and another at Avignon, situation which lasted 39 years and is known by the name of Western schism (1378-1417). The pope from Rome was obeyed by all Catholic countries, except for France, Portugal, Spain and Scotland, who obeyed the antipope in Avignon.

In order to end the scission, the Synod of Pisa was convened and defrocked both the pope in Rome and the one in Avignon, electing a third pope, Alexander V (1409), followed by John XXIII, with the residency in Pisa. These three popes anathemised one another and created confusion, each of them appointing his own bishops. On the intervention of emperor Sigismund IV of Germany, all three – Gregory XII in Rome, Benedict XIII in Avignon and John XXIII in Pisa – resigned, accepting the election of Pope Martin V (1417-1431).

Among the oddities that have marked the past of the Vatican, there is the death of Leo I (440-461)…in the restroom, during a council break, but also the story of Popess Joana (John VIII Anglicus) who is said to have reached the pontifical chair disguising herself as a man. The mistification came out when the “popess”, pregnant with one of the valets, was overwhelmed by  the throes of childbirth during a procession, which lead to her stoning by the infuriated crowd.

The story is denied by the official historians of the Vatican, but Sedia Stercoraria stays to support it, a strange marble chair with a whole in it, found in St. John Lateran Basilica. Every pope, before the investiture, had to sit on this chair for a… palpation meant to certify his masculin sex. Once the inspection over, the one doing it would state: Duos habet et bene pendentes (“Two he has and properly they hang”).

Pietro Boccadiporco was one of the first popes to change their civil name during popedom (because Boccadiporco means pig mouth). He is remembered in the history of papacy by the name of Sergius IV. Also, Pope Virgilius (537-555) is said to have bought his pontfical title with 700 pounds of gold, which he had received from Empress Theodora of Byzantium. The one who imposed his title in Rome was general Belizarius, whom Vergilius never gave the money he had promised.

Yoga Course in English, in Bucharest