Turmeric extract, when combined with gingerols in ginger and piperine in black pepper, shows promise for addressing osteoarthritis, with results similar to those achieved by a common anti-inflammatory medication. 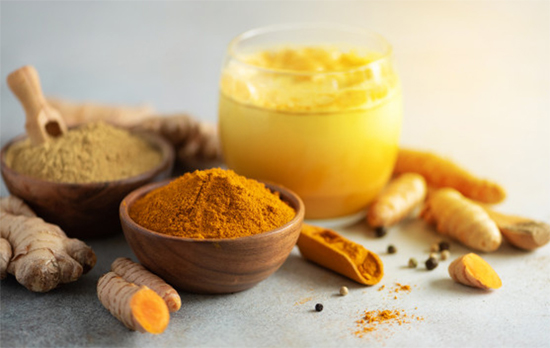 Osteoarthritis is a degenerative joint disorder that is the leading cause of disability in the elderly and a major contributor to chronic, debilitating pain. It is a challenging disease with limited treatment options.

While medications like nonsteroidal anti-inflammatory drugs (NSAIDs), acetaminophen and opioids are widely used to relieve osteoarthritis pain, they usually come with side effects and are unable to reverse the cartilage damage that underlies this condition. This has positioned curcumin, the active ingredient in the spice turmeric, as a strategic way to address the inflammation and protect the joints.

A study further investigated curcumin and its effectiveness for knee osteoarthritis when paired with beneficial ingredients in ginger and black pepper, with promising results.

An August 2020 study investigated curcumin when combined with gingerols in ginger and piperine in black pepper, which may enhance and sustain its effect against the disorder, compared with the drug Naproxen.

The study subjects were randomly assigned to receive turmeric extract, ginger and black pepper together or Naproxen for four weeks. The results indicate that taking the three-spice combo twice daily for four weeks improved prostaglandin E2 (PGE2), a primary inflammatory mediator in osteoarthritis, levels similar to Naproxen. PGE2 decreased significantly in both groups, without any substantial difference between them.

A previous study found that over half of osteoarthritis pain studies and more than 80% of industry-funded ones used trial durations of less than six months. This despite the fact that the disorder and resulting chronic pain are progressive and represent a long-term burden on patients and health care systems.

Previous studies have also explored the role of curcumin in treating osteoarthritis. In one study involving patients with moderately severe symptoms that required treatment with an NSAID, the subjects were given the NSAID diclofenac – 50 milligrams (mg) twice daily – or curcumin, 500 mg three times daily. Both treatments relieved arthritis symptoms and helped to a similar degree, with curcumin users reporting fewer side effects.

There has been growing public awareness of the adverse effects linked to synthetic painkillers, thus providing the need for natural and evidence-based alternatives. Here are four clinically validated, natural alternatives that are worth considering for osteoarthritis and other sources of chronic pain:

– Arnica – In a 2007 study, topically applied arnica was found to be as effective as ibuprofen for relieving symptoms due to osteoarthritis of the wrist. It also led to fewer side effects.

– Thyme – A 2004 study found that thyme extract worked as effectively as ibuprofen in decreasing pain and spasm symptoms associated with dysmenorrhea, or menstrual cramps.

– Omega-3 fatty acids – In a 2006 study, omega-3 supplementation reduced neck and back pain patients’ need for pain medications, along with improving their overall pain and joint pain. The subjects saw results consistent with previous research, indicating outcomes at least as effective as ibuprofen.

– Cinnamon – A 2015 study concluded that cinnamon was as effective as ibuprofen for menstrual pain.