Undeniable links between the Oxford/AstraZeneca, covid-19 vaccine and the British Eugenics Society

On 2nd of July 2021, Dr. Reiner Feullmich and the Corona Ausschuss (or Corona Investigative Committee) interviewed Whitney Webb. Webb, a writer and journalist, has extensively researched the industry behind epigenetic medicine. Joining the interview was Dr. Wolfgang Wodarg who exposed and was instrumental in bringing to an end the 2009 Swine Flu Scandal. His actions resulted in an investigation by the European Parliament ‘to look into the issue of ,,falsified pandemic” that was declared by WHO in June 2009 on the advice of its group of academic experts, SAGE, many of whose members have been documented to have intense financial ties to the same pharmaceutical giants such as GlaxoSmithKline, Roche, Novartis, who benefit from the production of drugs and untested H1N1 vaccines.’ 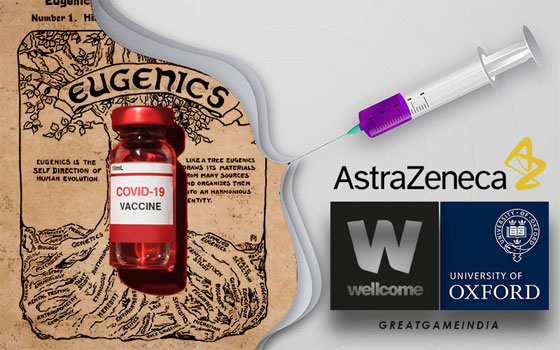 During Webb’s interview Dr. Wodarg recalled a change in German legislation in 2009 which paved the way for today’s use of gene therapy ‘vaccines’ – a long-term goal of the eugenics movement. “Evolutionary humanism has eugenic implications also … Within a century we should have amassed adequate knowledge …. When this has occurred, the working out of an effective and acceptable eugenic policy will be seen as not only an urgent but an inspiring task, and its political or theological obstruction as immoral.” – Julian Huxley, New Bottles for New Wine, p306, 1957.

Webb’s interview is packed full of rapid-fire facts about people and organisations and what links them. You can watch the full interview here, and read a summary of highlights here.

Her article, ‘Developers of Oxford-AstraZeneca Vaccine Tied to UK Eugenics Movement’ is a must read.

The image below shows some of the network behind the Oxford/AstraZeneca ‘vaccine’ according to Webb’s article and the text below it is, in the main, extracted from the same article. 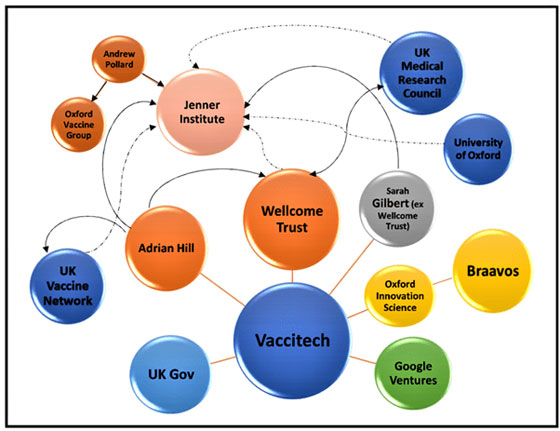 Adrian Hill and his partner at the Jenner Institute, Sarah Gilbert, co-developed the Oxford covid-19 ‘vaccine’. But the patent and royalties for the ‘vaccine’ is held by a private company: Vaccitech.

Initially established in 1995, the Jenner Institute was a public-private partnership with GlaxoSmithKline (GSK) and the UK Government. GSK ‘pulled out’ and the institute was relaunched in 2005. Hill is the head of the Jenner Institute, the chief at the UK Vaccine Network and leads a research group at Wellcome. One of Hill’s bosses, early on in his career, was the late David Weatherall a member of the British Eugenics Society.

Gilbert also hails from the Wellcome Trust and is a student of Hill’s. Together, Hill and Gilbert have worked to position the institute to be the center of all future vaccination efforts undertaken in response to global pandemics. Hill and Gilbert are both set to make significant profits from their shares in Vaccitech.

Hill and Gilbert created Vaccitech in 2016. Vaccitech was spun out of the Jenner Institute via the University of Oxford’s commercialisation arm: Oxford Science Innovations.

Prior to covid-19, Vaccitech’s main focus was the development of a universal flu vaccine. To fully finance Hill and Gilbert’s Vaccitech, Oxford Science Innovations sought “outside investors,” chief among them the Wellcome Trust and Google Ventures. So, Google is poised to profit from the Oxford/AstraZeneca ‘vaccine’ at a time when its video platform YouTube has moved to ban vaccine–related content that shines a negative light on covid-19 ‘vaccines’.

The Wellcome Trust is essentially the philanthropic arm of GSK. It regularly co-funds the research and development of vaccines and birth control methods with the Gates Foundation, a foundation that actively and admittedly engages in population and reproductive control in Africa and South Asia.  The Wellcome Trust, which has arguably been second only to Bill Gates in its ability to influence events during the covid-19 crisis and vaccination campaign, last year launched its own global equivalent of the Pentagon’s DARPA, namely: Wellcome Leap.

Andrew Pollard chairs the UK Department of Health’s JCVI; chairs the EMA scientific advisory group on vaccines; is a member of WHO’s SAGE; works for the Jenner Institute; and, heads the Oxford Vaccine Group.

Due to a sole encounter in January 2020 – where Pollard and a member of SAGE shared a taxi – the Jenner Institute began to pour millions into the early development of a covid-19 ‘vaccine’. Pollard is also enmeshed with the Gates Foundation. Pollard’s employer, the University of Oxford, has received hundreds of millions of pounds in funding from the Gates Foundation over the past decade and Pollard’s private laboratory is funded by the Gates Foundation. Bill Gates, a Rockefeller descendent was pushed forward with one goal in life – to become the face of population control and depopulation within the framework of agendas set by the UN.

GAVI is a public-private partnership founded and currently funded by the Bill & Melinda Gates Foundation. It plans to distribute the Oxford/AstraZeneca ‘vaccine’ to low-income, predominantly African and Asian countries. COVAX, the public-private partnership between GAVI, Vaccine Alliance and the World Health Organization aims to deliver 270 million covid ‘vaccines’ – with 269 million of them being the Oxford/AstraZeneca ‘vaccine’ – to the world.

In summary, known eugenicists in the Oxford/AstraZeneca ‘vaccine’ orb include: the lead developer – Adrian Hill; the investor – Wellcome Trust; the funder and promoter – Bill Gates; and, let us not forget the Prime Minister Boris Johnson who, following in his father’s footsteps, wrote in 2007 regarding global population growth: “I simply cannot understand why no one discusses this impending calamity, and why no world statesmen have the guts to treat the issue with the seriousness it deserves.”

“The alleged covid-19 pandemic is the greatest fraud in history. It has been inspired, maintained and promoted, without mercy, by the most evil people the world has ever seen” – Dr. Vernon Coleman.

Wimbledon got it entirely wrong – applauding Gilbert was completely distasteful and, instead, they had a duty to the world to show Gilbert and her ilk their utter disgust. It is the likes of Dr. Wodarg, and his current day counterparts, who should be receiving the standing ovation.