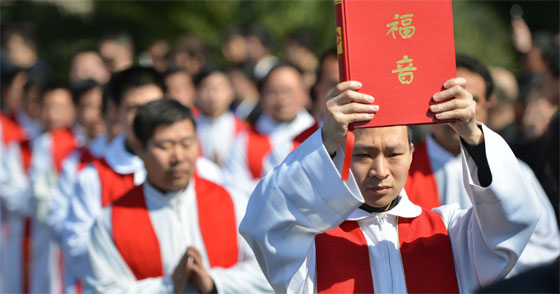 Christianity is legal under the communist regime in China only under the Chinese Catholic Church, run by the Party and not the Vatican, and the Patriotic Three-Self Church, a “Protestant” alternative also run by the Communist Party. Many Chinese Christians reject both options, as the Party does not allow free worship in its legal institutions and requires clergy to use their platforms to advance the regime’s agenda. Instead, many choose what is referred to as “house churches” – illegal worship in private homes, where small groups get together to study the Bible and pray.

Beijing officially estimates China is home to about 40 million Christians. Counting “house church” Christians, however, independent groups believe the number is closer to 100 million people, more than the total membership of the Communist Party. Under dictator Xi Jinping, the Communist Party has for years implemented a policy it calls “sinicization,” or turning all religions “more Chinese.” This has translated into the building of hundreds of concentration camps for Muslims in the nation’s West, where they face extreme indoctrination, as well as the mass arrests of independent Christians, Tibetan Buddhists, and Falun Gong practitioners. The imprisonment of Christian pastors who refuse communist control has been heavily publicized and widespread; the RFA report reveals what appears to be an alternate punishment for Christians who the Party struggles to disappear into its draconian legal system.

A witness identifying only by the pseudonym Li told RFA he had been initially arrested in a raid against parishioners at his church in 2018 and released on bail. Prosecutors apparently had little to use against him, so he fell under the control not of Chinese police, but of the United Front Work Department, an arm of the regime tasked with fostering and maintaining loyalty to the Communist Party. Li said he spent about nine months in a “mobile” torture facility run by the United Front Work Department. “They use really underhand methods. They threaten, insult and intimidate you. These were United Front officials, men, women, sometimes unidentified, usually in plain clothes. The police turn a blind eye to this,” Li told RFA. “You have to accept the statement they prepare for you. If you refuse, you will be seen as having a bad attitude and they will keep you in detention and keep on beating you.”