Five miles from Cairo stands one of the most ancient and alluring sites in human history. This mystery comprises the three main pyramids of Giza that have come to represent one of the most famous ancient civilizations. 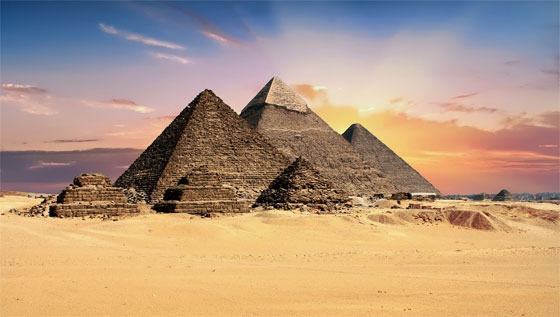 The megalithic stones that form these structures lie on a great plateau, and now investigators have found something else fascinating that lies below the pyramids. Gregg Braden explains that some of the earliest credible accounts of the Giza Plateau come from the Greek historian and geographer Herodotus, who, in the early 400s B.C.E, compiled a reference book on ancient civilizations, cultures, and technologies predating his time by thousands of years.

Prior to Herodotus, no one had presented a systematic, thorough study of the past, attempting to link events with how they shaped history. Herodotus speculated there were hidden passages beneath the pyramids, as well as chambers, pathways, and great spaces – all of which were created when the climate and topography of Egypt were very different than it is today. Herodotus felt that beneath the pyramids lay the remnants of other ancient civilizations.

If Herodotus was correct, the pyramids may be sitting upon the most amazing time capsule in history, revealing not only long-lost cultures but also their technologies and origins saved in the earliest of writings and images.

Two researchers stand out in the search to uncover the underground spaces beneath the pyramids: British Consul General Henry Salt and his hired explorer Giovanni Battista Belzoni. These men were able to survey the area with the limited technology of their time in the early 1800s and were led by the desert topography to an area at the edge of the Giza Plateau, now an archaeological find of its own called The Tomb of the Birds.

Andrew Collins, the author of Beneath the Pyramids, suggests The Tomb of the Birds was a tribute to a keeper of hidden records and perhaps this site, a stone’s throw from the pyramids, is one of the entryways into the subterranean world beneath Giza.

Modern science backs up Collins’ claim thanks to satellite images, revealing an underground passageway from The Tomb of the Birds to the second pyramid. This finding had nearly been lost to history but was rediscovered in 2008 when Collins read Salt’s 1817 diary journal. This is where the story just begins to get interesting, and in the episode titled “Seven Levels Below Giza” from season three of Ancient Civilizations, we learn why.

Giza has long been referred to as Rostau, meaning the “mouth of the passages,” and may be the key to this trove of lost knowledge. And with the help of British Egyptologist Nigel Skinner-Simpson, Andrew Collins brings new light to Henry Salt’s exploration on the plateau. According to researcher Anton Parks’ translations of ancient Sumerian tablets, there were seven levels of caves beneath the Giza plateau. This underground system was inhabited by ancient Egyptian gods known as the Clan of Osiris. Parks’ research found that prior to these extraterrestrial “gods” another species of lion-headed extraterrestrials, known as the Urma, came to Earth and inhabited this underground infrastructure. This is why we see remnants of their species in the Sphinx and in the Egyptian goddess Sekhmet.

Parks says these seven levels were massive and initially carved by the Mediterranean, which engulfed Egypt thousands of years ago.

– The first level was inhabited by prisoners and people of the Egyptian court.

– The second level was where an underground tributary of the Nile ran through and was where gardens were kept.

– On the third level lived hybrids and their gods, as well as the humans dedicated to hybrid offspring.

– And the final levels housed the technology that created the artificial atmospheres and power generators to supply energy for the entire infrastructure.

Could this massive underground system still exist? As with all such mysteries, only time will tell the truth and reveal what has been suspected by so many for so long regarding Giza’s underground system of caves, chambers, and perhaps even hidden treasures. And it seems that given today’s technology we may be able to peer into lost worlds far below the surface of the pyramids.

The great covid masquerade: How the number of dead was tampered with in order to terrify the world