The World Economic Forum have had a bigger part to play during the past eighteen months than many of you may realise, and recently they have even released a helpful guide for Governments and Public Health Officials around the world on how to coerce and manipulate the general public into getting the covid-19 vaccine.

The WEF state in a recent article that in order to achieve herd immunity to the alleged covid-19 disease, public health officials should use “advertising theory”, manipulate the way people think and feel about getting the jab, use community leaders and health workers to voice propaganda, and offer bribes as incentives to “help get skeptics through the doors of local vaccination centres”. 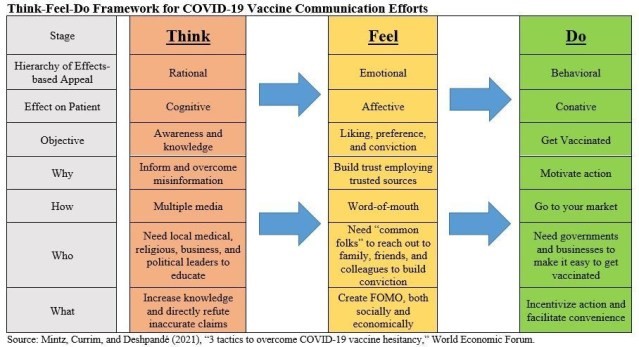 Advertising theory revolves around the Hierarchy of Effects Framework which suggest that “customers think first, then feel and then do”. The WEF believe that policy makers around the world are currently only accommodating for people who are already interested in getting the covid jab, so they recommend that in order to convince skeptics, officials should resort to three simple methods of coercion and manipulation.

The first step the WEF recommended public health officials to implement involves “increasing knowledge and overcoming misinformation”. This revolves around the “think” stage of the advertising theory and states that local leaders proactively reach out and educate skeptics via “media such as phone calls, direct mail, television, billboard, and digital channels”. Why do they recommend this? Because thanks to research the WEF think that people are “likely to believe the invention and approval process of the vaccines was rushed, with under-reported side effects”.

The problem with the WEF’s advice here is that people are quite right to believe the invention and approval process was rushed. They are also right to believe that there under-reported side effects. This isn’t a matter of opinion, it’s a matter of fact. The average time it has taken for all vaccines on the market to be approved is around eight years. They began administering the covid-19 vaccines into the arms of the general public within 11 months of them allegedly being created, but even then they weren’t approved like other vaccines, they were instead given emergency use authorisation. Why were they only given emergency use authorisation? Because they are still in phase three trials and are therefore experimental. The emergency use authorisation means that the manufacturer of the vaccine cannot be held liable for any injury that may occur as a result of the vaccine.

The second step the WEF recommend public health officials implement involves propaganda and harassment. This revolves around the “feel” stage of the advertising theory and states that the vaccine hesitant should be bombarded with phone calls and discussions, and harassed on social media to persuade them to get the covid jab. The WEF also suggest another way to improve vaccine skeptics’ feelings is to play into a fear of missing out (FOMO), both socially and economically. To achieve this, the WEF recommend that public health officials use tactics that induce guilt and regret. They suggest this can be done in a similar fashion as was successfully employed in Canada during the 1930’s and 1940’s to confront diphtheria. During this period they used messages such as “if your children die of diphtheria, it is your fault because you prefer not to take the trouble to protect against it”. The problem here is that the covid vaccines do not prevent infection or transmission, therefore using messaging such as what the WEF recommends is coercion and would not amount to informed consent, because instead the person would be extremely misinformed.

The covid jabs have only allegedly been proven to reduce the risk of being hospitalised or dying from covid-19, a risk that is already incredibly small for most people amounting to around 0.02% on average. The limited trials carried out only measured whether or not a vaccinated person suffered serious disease if infected with covid-19, but they were flawed as nobody was exposed to the virus during the study, they only measured what occurred when out in the general population. They did not measure whether a vaccinated person could still become infected with covid-19, and they did not measure whether or not a vaccinated person could still spread the virus in line with the mainstream accepted germ theory. Pretty disgraceful advice from the WEF considering the above isn’t it?

The third and final step the WEF recommend public health officials implement involves bribery, and cold-calling. This revolves around the “do” stage of the advertising theory and states that incentives should be offered to coerce people to get the covid-19 vaccine as well as harassing people at their homes in an attempt to persuade them to have the jab there and then. The WEF advises public health officials to offer cash incentives, free transportation, paid time-off, free products, and lottery giveaways as bribes to “encourage” take up of the covid jab.

They also advise that pop-up clinics are set up in under-served areas with vaccine-hesitant populations and to create “vaccine swat teams” that harass people in their homes under the guise of reaching people who are “home-bound” or “experience difficulty” in getting to vaccination centres. 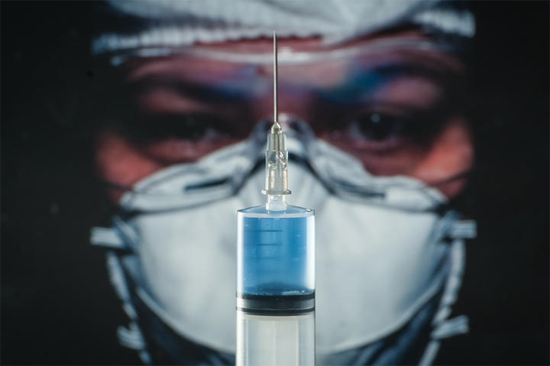 The World Economic Forum state that they “believe applying the ‘think – feel – do’ patient-centered approach to the covid-19 vaccine communication problem will improve efforts at accelerating global herd immunity. Ensuring a safe economic reopening and recovery and overcoming this significant health and economic challenge could depend on such tactics”.

The covid-19 vaccine will not ensure a safe economic reopening and recovery, just as covid-19 never caused a safe closure and decimation of the economy. It was tyrannical governments and their one-dimensional scientific advisors who closed and destroyed the economy, but it couldn’t be done without the unquestioning compliance of the general public.

But can we really blame the public for it considering the tactics of psychological warfare unleashed on them by the authorities to manipulate them into compliance? Psychological warfare which triggered the emotion of fear, and moulded them into sacrificial lambs under the guise of “doing their bit for the greater good”.

The very same tactics the World Economic Forum now recommends authorities use to manipulate the same public into taking an experimental “vaccine”.

Paving the way for the Coronascam