Endgame: Disclosure and the Final Defeat of the Cabal (13)

The history of the pre-Adamites

According to Sigmund, this Pre-Adamite group had apparently arrived here from another planet in our solar system that was no longer hospitable.
They arrived here approximately 55,000 to 65,000 years ago, and began to create hybrids of their species and the developing human population.

This fit beautifully with what Gonzales and others had already disclosed: what we now see as Antarctica was the seemingly mythical “lost island” of Atlantis. 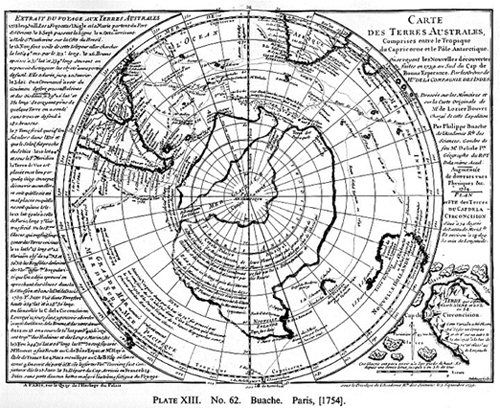 The Buache map from 1754 (in the image above) depicts accurate sub-glacial topography of Antarctica. No one in modern times even saw the continent itself until 1820. 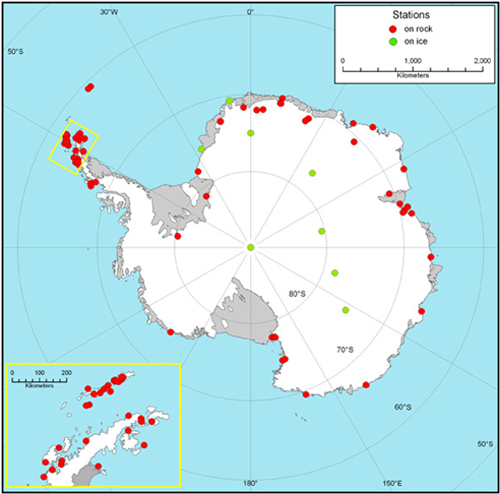 Insiders tell us the Buache, Orontaeus Finaeus and other maps were copied over from ancient scrolls in the Vatican Library. 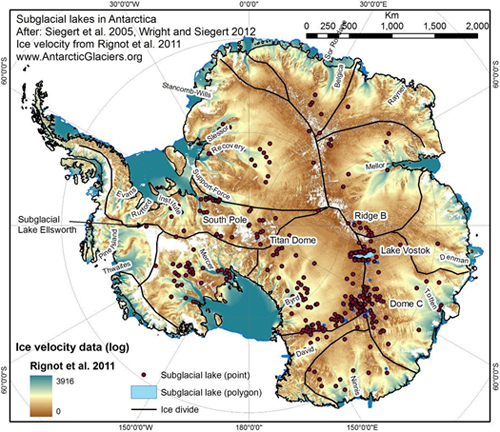 The Earth shifted on its rotational axis, perhaps due to a nuclear war, and the water that inundated the continent quickly flash-froze into a gigantic ice shelf.
Sigmund stated that the hybrid survivors of this catastrophe – who were living on other continents at the time of the great flood – completely lost access to their ancient cities for over 10,000 years.

These beings then began to breed with the human populations in the regions they were stationed in at the time of the disaster.
One major faction of Pre-Adamites was constrained to the Americas, while the other survived in Europe, Africa and Asia.

Tompkins, Aldrin, the Draco and Antarctica

The 29 embedded German spies Tompkins interviewed during WWII confirmed the Nazis were working with a violent, aggressive reptilian race. This group is humanoid, but with reptilian features. They have been called the “Saurians” or the “Draco”, and pose the biggest problem for everyone in our region of the galaxy.

Surprisingly, the Draco has a central base of operations in our solar system – including huge under-ice facilities in Antarctica.

This makes Buzz Aldrin’s alleged tweet extremely interesting (details below). We do now know that this tweet was disinformation, but the contents are still important to analyse.
We can prove that he had visited Antarctica while wearing a shirt encouraging us to get to Mars ASAP. 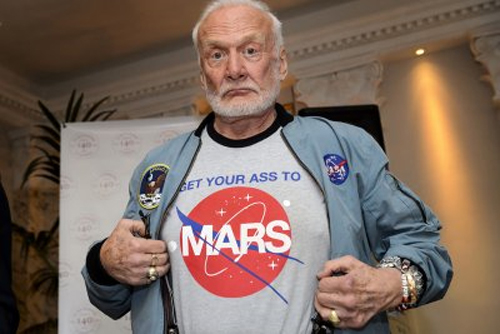 We did hear that he was there to tour the Pre-Adamite ruins that are now on the verge of being disclosed to us, as part of this transition plan.
Aldrin fell ill and had to be returned home.
The disinfo begins with him allegedly tweeting a pic of an alleged Antarctic pyramid, with the words, “We are all in danger. It is evil itself.” 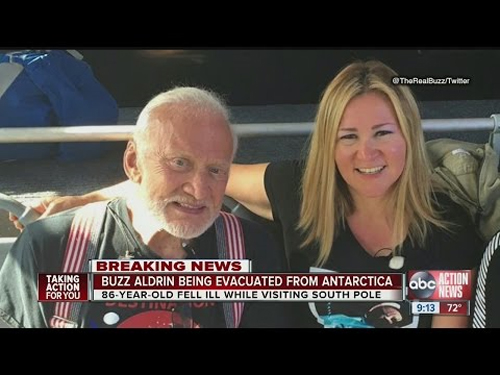 If this had actually been real and not another internet hoax, it strongly suggested that he was briefed on the existence of the Draco, perhaps “off the record”, and it nearly gave him a heart attack.

Excavation has finally been allowed

My contacts in the SSP Alliance revealed that the Draco have finally allowed the US to excavate new Pre-Adamite archaeological sites under the Antarctic ice.
They have also granted permission for the small number of surviving Pre-Adamites to access these areas once again.

These Pre-Adamite people look and sound just like us, except that they have elongated skulls that they must keep hidden if they are ever seen in public.
David asked me how many of these people still live on Earth. As of now I do not have any clear intel on their numbers, but it is likely in the thousands, if not more.

The amount of ancient technology and information that has been found preserved in huge libraries under the Antarctic ice is staggering.

I was listening to Sigmund telling me his version of the story and watching his face as he shared the information.
He noticed me looking at him and wondering why he was sharing this with me. This caused him to break off from the current topic.
He then stated that the data they collected from me the last time we met had the telemetry that I had retained subconsciously from the reconnaissance flight under the ice.

This finally convinced him that at least some of what I was saying was true.
David asked me for clarification when I first wrote this. Specifically, I had witnessed information on the heads-up displays in the Anshar “Bus” craft I was riding in.
Under interrogation, I was able to recall specific telemetry from those displays that proved to be extremely accurate – enough to meet Sigmund’s quality standards.

Sigmund then stated that he was going to alter my state of consciousness again to be able to dig deeper into my experiences and see what else he could glean.
I told him I would prefer it if he didn’t. I would be happy to answer any questions he had.

He ignored me and walked over to pick up a small device that had a metallic-looking cone at the end that looked like some sort of antennae. He then put in some sort of ear-plugs and turned the device on. I heard the same high pitched noise that I had the last time.

Leaving the craft and catching another ride

The next thing I am able to remember was walking back down the stairs of the craft, with both airmen assisting me down the narrow stairs to the parking lot. I walked back home and went into my living room. A blue orb was zig-zagging around as if it was waiting for me. 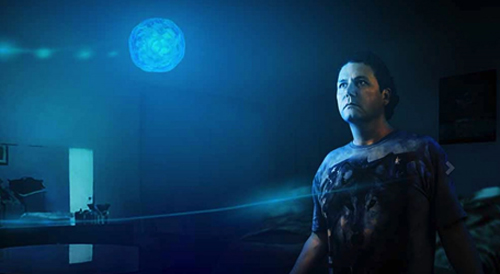 This is a phenomenon that has been ongoing since this all started in February 2015. It is the transportation system used by the Blue Avians. Many people are starting to see blue or purple orbs, just as I had been told would occur. This is a key part of our mass awakening process. I indicated that I was ready to be transported and was taken back to the same Mayan Break-Away mothership I had been on before.

Another meeting with the Mayans

The Mayan Break-Away group started out in Mesoamerica, and thanks to a successful ET contact, they were able to migrate off-planet. They have since become advanced enough to develop a unique technology that appears to be based on the use of stone and consciousness. They act as a healing group that have provided treatment to Gonzales and many other survivors of SSP enslavement and torture.

There were now six of the Mayans in the room. Three of them were females. I had only seen a female on one occasion before with any degree of closeness. Gonzales was standing over by the floating stone console looking at it, while a Mayan was working the controls. He directed his attention to me and greeted me. He walked up and scanned me with the same black stone sphere that he held in his palm the last time.

He smiled and as he lifted it up, he said “Please focus your intention on the magic 8 ball”. He then scanned my head again while I tried to focus on the black stone sphere as he requested. Once he finished his scan, he turned and walked over to the floating console and somehow placed the stone sphere into the side of it. He then looked over at the Mayans. They then went into the next room where another stone console was floating, and gave us some privacy.

Seeding info into the MIC SSP

Gonzales stated that he was sorry he couldn’t share some of the details about why I was being abducted and interrogated up until now. He stated that this was part of an operation that was seeding information into the ranks of this MIC SSP.

Apparently many of them are disillusioned and questioning whether or not they were indeed at the top of the intelligence totem pole, as they had been led to believe. He stated that if this information gets to the right people within the MIC SSP, it could hinder the wider plans of doing a partial disclosure of their program.

These individuals now felt there was much more going on in “the programs” than they had been told. Gonzales further communicated that I had to be unaware of this operation so the interrogators would not figure out this info was being given to them on purpose.

I had assumed that a similar scenario was behind why I had been kept so completely in the dark about what was happening to me – and why all of this had been allowed to occur by the SSP Alliance and the SBA.

More on the Pre-Adamites and Antarctica

Gonzales and I then talked about the conversation I had onboard the MIC SSP craft regarding the Pre-Adamites. Gonzales confirmed that he had received the same intelligence from some of his SSP Alliance contacts. The same data also appeared in the reconnaissance flight telemetry that the Anshar had shared with him.

Gonzales soon moved to another topic. He stated that Cabal proxies had discovered pieces of ancient technologies hidden in time-capsules in many of the ancient Sumerian ruins. These proxy agents completely razed these ancient ruins to the ground looking for these time capsules. 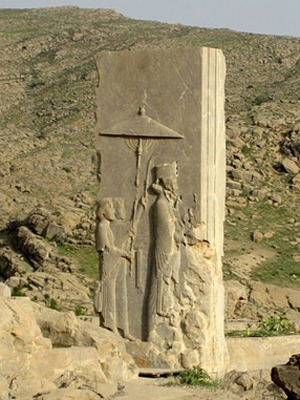 These groups not only found several pieces of technology inside the walls of these ruins, they also located some new sites buried below them that were much more ancient.

After these historical sites were destroyed, the Alliance sent operatives to other similar sites across the planet to do sonar scans and try to locate more of these time-capsules. He stated that they were doing so in the dead of the night, and were using very advanced technologies to try to detect other anomalies around these ancient sites.

According to Gonzales, the ancient technologies that were discovered in Iraq had belonged to this Pre-Adamite group. This group wants the return of these technical artefacts immediately, considering them to be their private and personal property.

However, certain factions who are now in possession of them will not turn them over. These are earth human proxy groups that the Cabal had sent on the behalf of the surviving Pre-Adamites. They got the cosmic equivalent of “gold lust” when they saw the treasure.

What further complicates matters is that there are two different royal blood lines among these Pre-Adamites. These two groups are in a type of competition over the control of the financial and political systems of various countries.

As I have said before, the people we are now calling Pre-Adamites all have psychopathic characteristics by our normal definition of the term. The elongated “miter” hats everyone wears in the Vatican are one of the ways they have been able to conceal themselves while still operating amongst us.

Read the fourteenth part of this article

The Damaging Effects of 5G Wireless on Your Health

The Deep State’s Control is Coming to an End