Endgame: Disclosure and the Final Defeat of the Cabal (5) 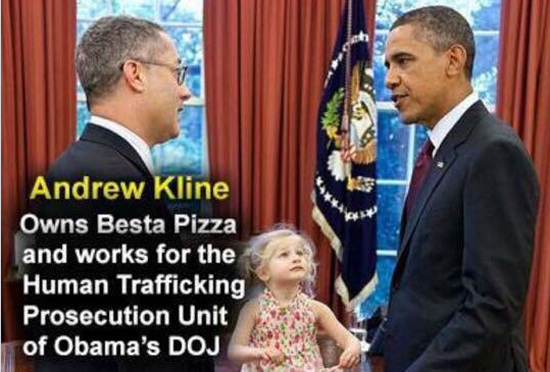 Besta Pizza and the coffee shop at Politics & Prose are owned by Andrew Kline.

And it is that Andrew Kline – the Clinton appointee overseeing the prosecution of child sex trafficking.

Kline’s ownership of Besta Pizza was hidden three levels deep in government data, so it was not easy for civilian investigators to find.

As revealed in a Vanity Fair article from May 24, 2011, “Special Litigation Counsel Andrew Kline, a Clinton appointee with an M.A. in human rights from Harvard’s Kennedy School of Government, was one of four attorneys in the Human Trafficking Prosecution Unit of the Department of Justice, in the Civil Rights Division.
It fell upon the curly-haired, bespectacled Kline (now a senior adviser in the executive office of the president) and one other colleague to provide U.S. attorneys nationwide with training on prosecuting trafficking cases.”

If one of four highest-ranking attorneys in the DoJ (U.S. Department of Justice) responsible for arresting paedophiles is himself a perpetrator, he can help ensure that he and his friends never get caught.

According to a Guardian article from Nov. 3rd 2016, “The currently serving FBI agent said Clinton is ‘the antichrist personified to a large swath of FBI personnel’.”

The central nexus-point for Pizzagate research on Reddit was censored as it went viral, as were the backups, but thankfully Archive.org captured it at its peak on November 22, and stored it here. Now that we have published this link, it may be censored off of Archive as well, but for now anyone can grab the data and mirror it.

All the initial, landmark Pizzagate videos were based off of the research in this thread, though additional links are continually being discovered as well. 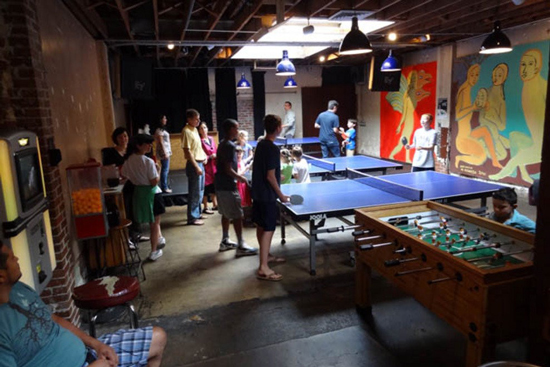 As an example, “Ping Pong” is apparently a slang reference for sex, due to the rhythmic motion involved.

The fact that Comet Ping Pong has many different ping-pong tables in the restaurant therefore becomes part of the “inside joke”. 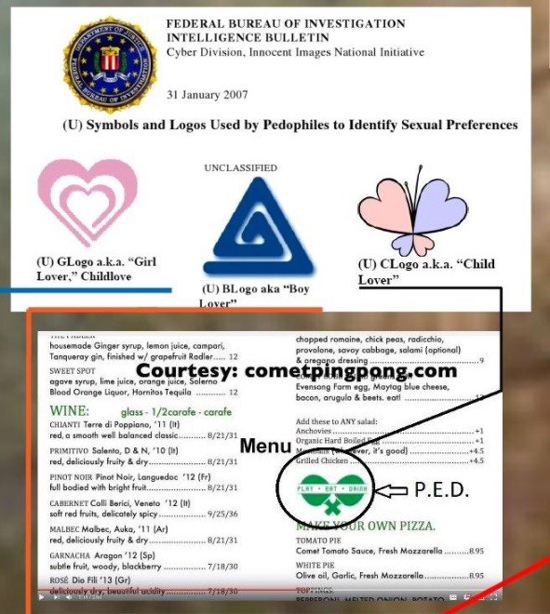 The Comet Ping Pong menu has a logo of two ping-pong paddles on it that looks very similar to the FBI-identified logo for Child Lover.

The wooden handles form a very clear Maltese/Templar cross, tilted sideways.
There is also a subtle suggestion of a human face that has been blindfolded – the white strip over the two circular paddles – and gagged, as seen in the X.

The “blindfold” over the paddles says “Play. Eat. Drink.” This may be an acronym for PED – i.e. a paedophile. All of those and much more can be found in the Reddit archive, though they did not see the Templar connections.

But of course, this is just a tragic example of “how fake news is hurting real people” – so says the New York Times. 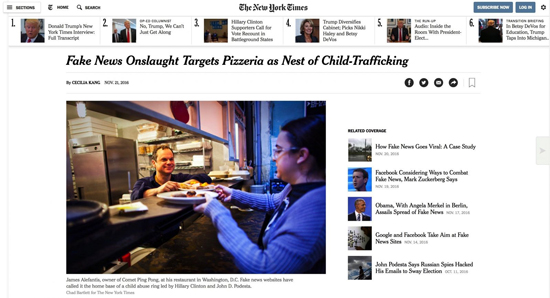 The greatest plot twist of the 2016 election was when FBI director James Comey announced that 650,000 new emails had been found on October 28 – just three days before Halloween.

Hillary’s campaign manager Huma Abedin was married to Anthony Weiner, who was caught in a months-long online sexual relationship with a 15-year-old girl.

The 650,000 emails, thousands of which were Clinton-related, were found in a folder on Weiner’s laptop entitled “Life Insurance”.

So many people who opposed the Clintons died of “suicide”, ever since Bill’s run as the governor of Arkansas, that the term “Arkancide” was coined.

Sensationally, the day before the election, Comey announced that no new evidence had been found in the emails.

Trump blasted Comey for this ludicrous announcement. It appeared that Comey was caught in between two different groups, both giving him lethal threats.

Just three days earlier, insider Erik Prince had released a bombshell of new information from the NYPD and the FBI.

On November 4, Breitbart News featured a massively significant article entitled Erik Prince: NYPD Ready to Make Arrests in Anthony Weiner Case.
Many people who formerly worked “on the inside” for the Cabal / New World Order have defected and become whistle blowers. 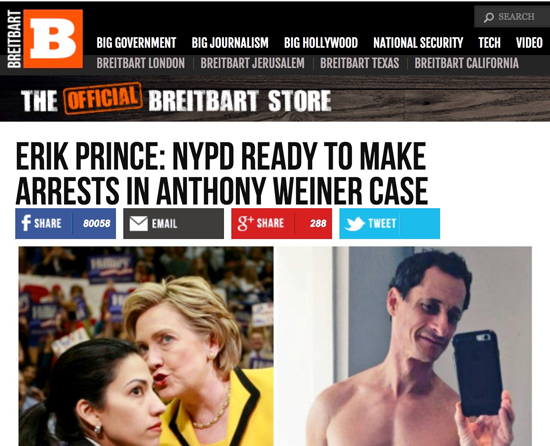 As the original founder of the Cabal’s own mercenary army Blackwater, Erik Prince definitely appears to have broken away and joined what we are calling the Alliance.

In this ground breaking article, we read the following: “Blackwater founder and former Navy SEAL Erik Prince… claimed he had insider knowledge of the investigation that could help explain why FBI Director James Comey had to announce he was reopening the investigation into Clinton’s email server last week….
[The NYPD] found a lot of other really damning criminal information [in the 650,000 emails on Weiner’s laptop]… including the fact that Hillary went to this sex island with convicted paedophile Jeffrey Epstein.
Bill Clinton went there more than 20 times. Hillary Clinton went there at least six times”.
“The NYPD wanted to do a press conference announcing the warrants and the additional arrests they were making in this investigation, and they’ve gotten huge pushback, to the point of coercion, from the Justice Department.”

The email evidence is “so bad”… “great evil”

As we read further in this key Breitbart article, we see that the mayor of NYC wanted nothing to do with the 650,000 new emails, and the NYPD feels they are proof of “great evil”: “As for [Bill de Blasio] the mayor of New York City, [Blackwater founder Erik] Prince said he has heard that ‘de Blasio wants to stay away from this’.
The [new Clinton email] evidence is so bad, the email content is so bad, that I think even [de Blasio] wants to stay away from it, which is really telling”.

“For any cop that is aware of this level of wrongdoing, and they have veterans in their family… they owe it to them to stand up… and shine the light of truth on this great evil.”

“This is stuff coming right off a hard drive that was owned by Weiner and his wife Huma Abedin, Hillary’s closest adviser for the last 20 years.”

“This is not from some hacker or anybody else. This is a laptop seized from a warrant in a criminal investigation.”

“This kind of evil, this kind of true dirt on Hillary Clinton – look, you don’t have to make any judgments. Just release the emails.” Erik Prince urged.
“Just dump them. Let them out there. Let people see the light of truth.” 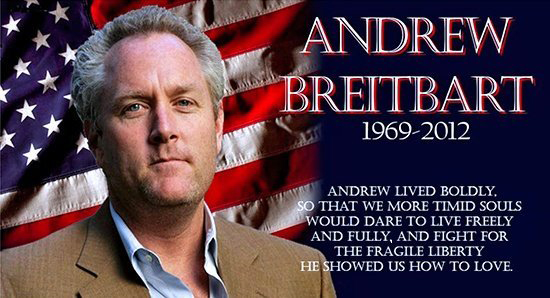 Then, a year later, all throughout February 2012, Breitbart telegraphed the release of a video that he said would appear on March 1 of that same year.
This video, he claimed, would be severely damaging to Obama’s re-election campaign. “Wait till they see what happens March 1”, he said.

Right before the anticipated release, on February 28, 2012, he tweeted: “How much longer until they kill me (‘heart attack’ or ‘car accident’) or frame me for a crime? Read me while you can.”
Andrew died of an alleged heart attack on March 1, 2012 – just two days later. Coincidence?

The coroner who conducted the investigation died of arsenic poisoning just two months later. It’s not that hard to figure out what happened here.
Blatant stunts like this are intended to scare people off, so they fear the seemingly limitless power of the “monster under the bed” and retreat back into the safety of silence… and ignorance.

Steve Bannon took over Breitbart News after Andrew’s death, becoming Executive Chair in March 2012.
It is therefore very interesting that Trump appointed Bannon to a cabinet-level position as his chief strategist and senior counsellor.

Mainstream media outlets are in an all-out panic about Bannon’s new role doing everything they possibly can to demonize him.

Bannon does have character defects. The media is amplifying them to the point where it seems as if that’s all there is to see.

After winning the elections, Trump announced that he will not prosecute Hillary himself. He won’t have to. The NYPD and the FBI will probably do it for him.
Insiders have revealed that if any action would have been taken before the inauguration, Obama would have issued pardons to stop prosecution from occurring.
Hence, we are in an agonizing “holding pattern” between now and then.

Magicians and Their Masters Rule the World, Not Politicians, Lawyers, Bankers, Aristocrats and Monarchs