Endgame: Disclosure and the Final Defeat of the Cabal (6)

The archived Reddit thread mentioned in the previous part of this article has much of the initial Pizzagate evidence that generated countless legions of YouTube videos, marching to defeat the Cabal.

Here are the two biggest things missing from the Reddit Pizzagate thread that are likely to be relevant:
1. The owner of Comet Ping Pong’s name, James Alefantis, appears to be a pseudonym cipher designed to resemble “J’aime les enfants” which means “I love children” in French;
2. The character which performed sick paedophile satanic music at Comet Ping Pong wearing a red ski mask, black sunglasses and a blonde wig, “Majestic Ape”, appears to be James Alefantis as well. 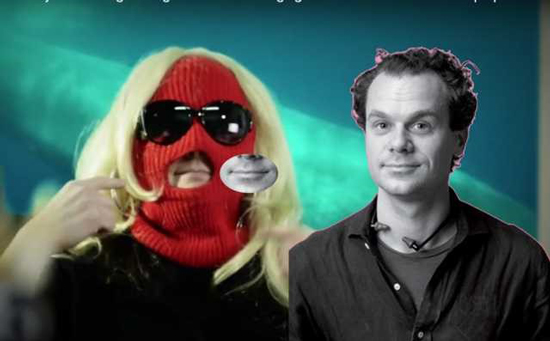 James Alefantis is still listed on GQ as the 49th most powerful person in Washington DC at the time of this writing, as you can see here.

The mouth that we see through Ape’s mask looks exactly like Alefantis’ mouth, including the thin lips, noticeable indentions around the philtrum below the nose, and the shape of the corners.

Furthermore, the voice of Majestic Ape, while speaking through the vocoder, sounds exactly like a pitch-shifted version of Alefantis’ voice.

Alefantis’ once-public Instagram posts included an image of a baby hash tagged as “hotard” and a man wearing a shirt saying “J’ (heart) L’Enfants” (I love children).
If that’s not enough, how about a creepy all-steel freezer hash tagged “killroom” and “murder”, or a child with her wrists duct-taped to a ping-pong table? 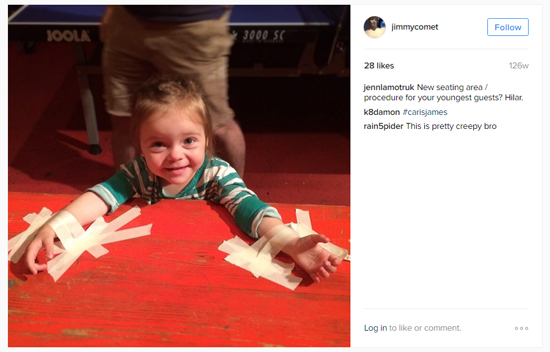 These are only a few of the many disturbing Instagram images that are featured in so many of the Pizzagate videos.
We are not going to post them here, since almost every website that does is suffering aggressive takedowns.

Murals on the walls of Comet Pizza included painted images of women holding the severed heads of children – and winged demons.
The videos also report that a mural in the bathroom had a demonic image that said “Shut Up and F–” which is very inappropriate for a child-themed restaurant.

Those images have since been scrubbed off the walls, as a video confrontation with James Alefantis revealed on November 22, 2016.

Alefantis claimed the images had been removed five years before, but that still doesn’t answer the question of what were they doing up there in the first place!

“Finish eating your pizza after your session”

Hackers on 4Chan claimed to have found a secret area of encrypted videos on the Comet Pizza website’s server.

Although they could not de-encrypt the videos, they were able to extract an image with text on it that provided instructions to those who were accessing the videos.
The instructions used code language to discuss an app that viewers would download and use one time only.

Here it is… if you can handle reading it: 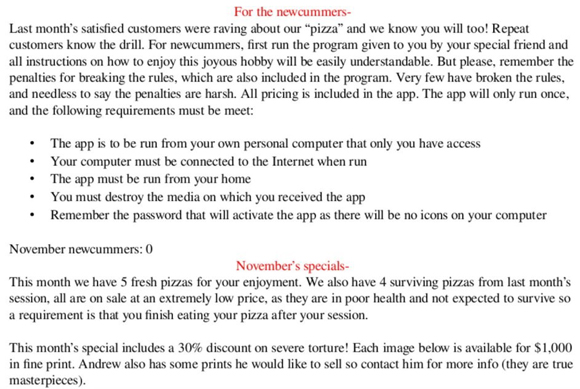 The following text from the image, if it is proven true, would be extremely condemning in a criminal investigation: “This month we have five fresh pizzas for your enjoyment. We also have four surviving pizzas from last month’s session.
All are on sale at an extremely low price, as they are in poor health and not expected to survive.
Our requirement is that you finish eating your pizza after your session…
Very few have broken the rules and needless to say, the penalties are harsh.”

When the disclaimer said “each image below is available for $1,000 in fine print” you most likely have to add a zero to get the price they are charging for a captured child.

The single most disturbing aspect of Pizzagate – perhaps even worse than Alefantis’ insanely offensive and evil Instagram posts that were public until this started – are the videos of Majestic Ape.

The name “Amanda Kleinman” is a distraction, as Majestic Ape does not look or sound anything like her.
“Majestic” is also a code term for high-level government secrecy, as in Majestic-12 or MJ-12, the group allegedly behind the UFO cover-up since at least the 1950s.

An insider also revealed to David Wilcock that the name “Majestic” refers to Her Majesty the Queen of England, who is a key figure in the Cabal controlling UFO secrecy.

Two tapings have emerged so far of Majestic Ape joking about raping and murdering children and babies on the Comet Pizza stage – which again is owned and run by James Alefantis.

In the main live video that has been quoted in so many Pizzagate videos, Majestic Ape says: “We are here to celebrate the birth of our Lord. It wasn’t Christmas”.

Other than a possible satanic reference, Majestic Ape appears to be joking about an employee named Sasha Lord, who was celebrating a birthday.
Sasha is the music booker for Comet Ping Pong. Majestic Ape’s thinly-veiled references, as quoted in the next section below, indicate Sasha may also work there as a prostitute.

The posters of Comet’s music acts on Sasha’s webpage contain multiple disturbing images.
This includes the Illuminati pyramid, All-Seeing Eye, pentagrams, children, a creepy owl face that could be the god Moloch, and a cartoon decapitated corpse. 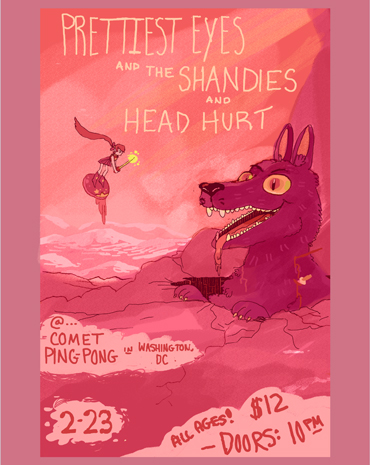 In a stage rant video, Majestic Ape says: “If you are like me, you love Sasha. Or if you don’t, you want perks from her. (Laughs) Things like free pizza. (Audience Cheers).”

He also says: “Have any of you enjoyed this special pizza here tonight called the Hottie?… If you haven’t had it, you should try it, it’s delicious.”
Majestic Ape then goes on to joke that the secret ingredient in “The Hottie” is ketchup – a possible reference to the blood of a sacrifice victim.

He also jokes about Sasha’s great grandfather inventing “Russian dressing, you put it on a salad… and s–k it!”
“Sauce” is one of the code words. “Salad” is sexual slang for the pubic area.

Another short three-and-a-half-minute video is the most disturbing of the Majestic Ape’s videos: he jokes about “euthanizing” a new born baby… his own. He rants that before the era of Facebook, he was worried that he was infertile. He says that then he impregnated Sasha, and killed the baby as soon as it was born.
The audience got very uncomfortable at this point, as if he was much too high to realize what he was saying, and quickly pressured him to change the subject.

Don’t watch the videos if you like to sleep

Even worse are the music videos of Majestic Ape, which are loaded with satanic and paedophile symbols and include grotesque murder scenes, such as at the end of “U the One I Want”.

The dollar values in “Airtight” are probably encoded, and require an extra zero to properly decipher. The “live performance” is offered in the video at 1,000 dollars.
The website ww3radar.tumblr.com made the obvious Alefantis / Majestic Ape connection, with comparison photos.

All of those photos were deleted just two days after we first located them. This makes it even more likely that there is a legitimate connection here that powerful people do not want us to find.

Some extremely disturbing links were associated with images on WW3Radar, including a mock “snuff film” starring a clothed female who may possibly be Sasha Lord.

Another video appears on a page from someone called “Montagraph” and is entitled “Little Piggy and the Umbrella Man”. In all honesty, don’t watch it!
The violent, psychopathic torturer in this video wears a black-and-white checkerboard mask. This is a Cabal symbol that appears on the floor of a Masonic lodge, indicating the interplay of negative and positive. 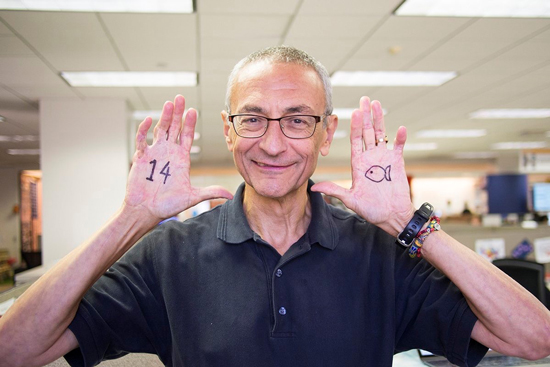 Similarly, it is much easier to decipher the “14 Fish” symbolism on Podesta’s hands than most of the YouTube videos think.
14 is the number of dismembered body parts of Osiris, which the Cabal sees as Lucifer, the left-handed path. The fish is the symbol for Christ, the right-handed path.

Notice they are on the opposite hands. The Cabal believe that both paths must be practiced to their fullest extent in order to achieve “enlightenment” or “Ilumination”.

Many YouTubers have noticed the bandage on the middle finger of his left hand exactly as Marina Abramovic recommends you wound with a knife in her Spirit Cooking ceremonies. 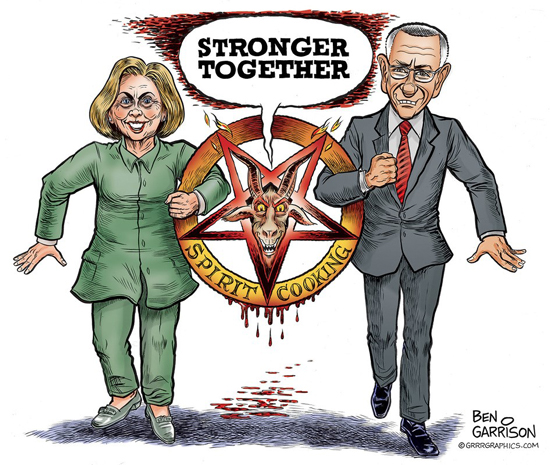