“I’m a kind of God, the Creator of everything. I feel comfortable about it.” – George Soros 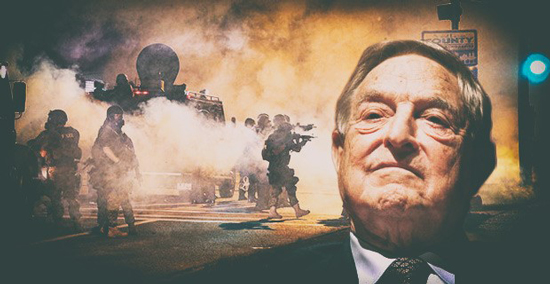 A devil is going around the world, undisputedly shattering the old world order with his NGO Open Society, financially and morally. His name is George Soros. He is a financial Zionist and Rothschild agent. His latest devilry is the catastrophic European mass import of Muslims. As a result, he has also had censorship against dissatisfied Europeans enforced.

In our NWO-controlled mass media, Soros is portrayed as a philanthropist: He gives away a lot of taxpayers’ money to his undermining projects – even paying the fares for migrants into Europe. As he himself admits to WikiLeaks he is the ringleader of this migration disaster as well as of financial crashes, the Arab spring, the color revolutions – e.g. the White Revolution against Russia and now the Purple Revolution against Trump, the revolution and chaos in the Ukraine etc. He is behind the racial riots in Ferguson, Baltimore, Charlotte and Occupy Wall Street in the USA. Soros is behind election fraud with at least 800,000 votes of illegal immigrants for Hillary Clinton – with Obama’s public appeal for this fraud as well. He is behind political campaigns of every dirty kind everywhere.
However, the Europeans are beginning to get fed up.

A recent initiative called Stop Operation Soros (SOS) is being developed in Macedonia to curb the influence of George Soros. The founders of the group call on all “free citizens” to devote themselves to the “struggle against one-sidedness in the civilian sector, which is planned and directed by George Soros”, a Slovenian newspaper reports.
Hungarian Prime Minister, Viktor Orban, has announced that the Hungarian government already begun to clamp down on Soros organizations. The Anti-Soros forces in France and Austria as well as Italy also have wind in the sails – not to speak of Brexit.

George Soros: “I admit that I have always had an exaggerated look of self-assuredness – to put it bluntly, I thought myself a kind of God”. This speculator grows the more megalomaniac the older he is (now 88 years old – but this kind usually grow much older).
“It is a kind of disease when one sees oneself as a kind of God, the creator of everything, but I feel comfortable about it since I began living it”, Soros told the British newspaper The Independent in 1993. This is Luciferian apotheosis!
“In addition to my fantasies of being God, I also have very strong fantasies of being crazy”, Soros once said in a British television interview. “In fact, my grandfather was paranoid, I have a lot of madness in my family, but so far I’ve escaped!”

Has the mad billionaire really escaped madness? He told his biographer, Michael T. Kaufman, that he sees himself as “the conscience of the world”. He pays billions of taxpayer dollars to re-create the world in his image.
In his book, Soros on Soros, the would-be god says: “I do not accept the rules imposed by others”. After years of insolence with impunity, he has become so brazen that he does not seem to worry about his illegal and immoral behavior.
However, after Clinton’s defeat and Brexit, Soros stands as the great loser: His NWO has moved into a remote future. Therefore, he and his master in the City of London will have to go to their plan B with their anti-thesis puppets Trump and Putin. In view of the NWO plan of their Masonic master, Albert Pike, this promises no good.

However, by and by, the peoples of Europe have realized one single man is behind their increasing misery: George Soros, Rothschild’s agent. And they are starting to fight back at governmental level. This setback combined with his defeat to Trump by his bought puppet, Hillary Clinton, and Brexit has made Soros “deeply frustrated”: His and his Masonic master’s NWO has come to an end – so they now will have to go over to their plan B by means of their Hegelian antithesis puppets Trump and Putin to obtain their NWO one-world governance – Agenda 21 or Technocracy.

In the following, you can see how resistance is forming against Soros – and have some more insight into the deeply psychopathic mind and manipulations of one of the greatest criminals of our time.

In January 2017, an initiative called Stop Operation Soros (SOS) was launched in the Balkan nation of Macedonia to counter the influence of globalist billionaire George Soros.
The founder of the group called on all “free-minded citizens” to join them in the “fight against one-mindedness in the civil sector, which is devised and led by George Soros”, reports a Slovenian newspaper.
Soros-funded non-government organizations have monopolized civil society in Macedonia and used their influence to suppress dissenting views by violent means in that country, said SOS co-founder Nikola Srbov.

Soros set up the Open Society Foundation in the 1980s with the stated goal of helping former Soviet bloc countries transition from communism, but in reality, the foundation is used to destabilize governments and foment discontent within countries.
Hungary’s Prime Minister Viktor Orban announced that the Hungarian government is cracking down on any organizations linked to Soros: “In every country, they will want to displace Soros”, Orban said. Eventually, “Soros and his forces will be squeezed out”, he continued.

In 2014, Soros openly admitted on CNN that the Open Society Foundation was involved in the violent overthrow of Ukraine’s government, which resulted in Russia banning Soros and his NGOs from the country the following year.
“Merkel’s plan” to inundate Europe with Muslims is also George Soros’ plan, as he openly admits himself.

In 2012 Soros predicted riots and class war in the US (actually, he planned them!).
In his childhood, this rascal grassed on his fellow Jews in Budapest to the Gestapo, then he stole and sold their properties! This he calls “the happiest time of my life”!

“I admit that I have always harbored an exaggerated view of self-importance – to put it bluntly, I fancied myself as some kind of god.” So confessed George Soros in his 1987 book The Alchemy of Finance. Then this speculator has grown more megalomaniacal with each passing year.

The Women’s March in Washington against Trump drew over 500,000 to the streets of the US capital on January 21, 2017. Over 50 of the groups involved in forming the march have received funding from billionaire activist George Soros. The list of figures connected with and involved in Women’s March listed on the group’s website resembles a “who’s who” of Soros funding recipients.

The anti-police riots in Ferguson, Baltimore, Milwaukee, and elsewhere have morphed into anti-Trump riots across the country, with many of the same organizations and individuals serving as instigators: Black Lives Matter, MoveOn.org, International Action Center, ANSWER Coalition, and other far-left, fake “grassroots” groups. They reliably perform on cue because they are lavishly funded by the Soros Open Society Foundation, the other big tax-exempt foundations (Rockefeller, Ford, Carnegie, et al.), and activist “pass through” organizations, such as the Tides Foundation, that bundle and launder hundreds of millions of dollars in “dark money” to the street revolutionaries. 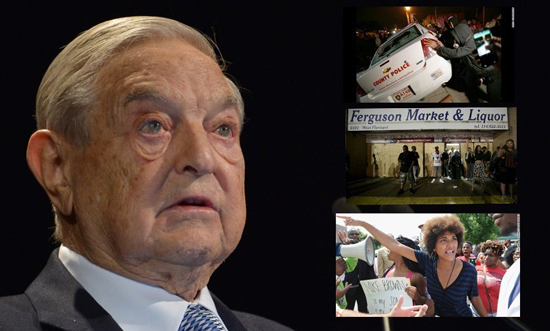 Another significant recipient of Soros cash is Colorlines, an online news site that helped parlay Ferguson into a national road show. “More than 500 of us have traveled from Boston, Chicago, Columbus, Detroit, Houston, Los Angeles, Nashville, Portland, Tucson, Washington, D.C., Winston-Salem, North Carolina, and other cities to support the people of Ferguson and help turn a local moment into a national movement,” wrote Akiba Solomon, a writer at Colorlines.

The anti-Trump demonstrations and riots – both before and after the 2016 U.S. election – follow a pattern that we have seen over and over again, from the protests of Occupy Wall Street to Black Lives Matter to Dream Act/Open Borders. Not only are the tactics the same, but many of the same groups and individuals keep reappearing.
Organizations such as Black Lives Matter and MoveOn.org are prominently involved, but Soros-funded groups such as Washington Community Action Network (Washington CAN) ran advertisements on Craigslist famous announcements website and in newspapers for “full-time organizers” to “Fight the Trump Agenda!” at $15/hour, plus paid vacation and benefits.

Soros was decrying the “corrupting influence” of money on politics, he was pioneering the funding of “527 groups” (so-called due to their status under Section 527 of the IRS Code) which can raise unlimited funds for political campaigns. He has organized Democracy Alliance, bringing together dozens of billionaires and millionaires to provide rivers of cash to his favored candidates and causes.

The Soros network has also generously funded many of “open border” and “open voting” groups. Although charges of widespread vote fraud, particularly involving illegal immigrants, have been dismissed by the establishment media, there is ample reason to believe this fraud is significant and should be officially and thoroughly investigated.

In a 2005 interview, National Public Radio’s Steve Inskeep noted that Soros has “been described as the only private citizen with his own foreign policy”. Inskeep remarked to Soros: Clinton. It’s easy to be a “philanthropist” when you’re spending other people’s money, namely the taxpayers’ money.

In Uzbekistan, for example, the Open Society Institute was actually receiving grants from the US State Department and spending millions of dollars of US government money on various programs. That was under President George W. Bush; it was not an isolated incident, and got much worse under President Obama and Secretary of State Hillary Clinton.

Soros has similarly hijacked US government policy (not by force, but by collusion) in Ukraine, Egypt, Albania, the European Union, and elsewhere – invariably with disastrous results. He has also been exposed as one of the major forces behind the calamitous “refugee crisis” that is swamping Europe with a tsunami of Muslim migrants.

How does George Soros manage to keep getting away with it? Obviously, his billions have bought a lot of influence. One of the major keys to his success is the shield he has been provided by the establishment corporatist media, which also act as his “echo chamber”. That’s by design. A September 27, 2007 e-mail from John Podesta to Soros, Peter Lewis, Steve Bing, and other left-wing billionaires outlined his plans for parlaying the vast network they had financed into a media “echo chamber” that would “control the political discourse”.

Several thousand hacked e-mails released by WikiLeaks and DCLeaks have provided plenty of condemning evidence to justify initiating a whole series of investigations into “Lord of Chaos”. Not surprisingly, the controlled establishment media has almost completely ignored this, prompting an editorial from Investor’s Business Daily entitled The Bizarre Media Blackout of Hacked George Soros Documents.

In his first days in office, Trump announced that he was scrapping the 12-nation Trans-Pacific Partnership (TPP) that his predecessor President Barack Obama had sought to complete during his eight years in office – and implemented by presidential executive order.
The TPP was deliberately crafted to ensure a form of “globalization” so that these same corporations who designed the “rules” could operate in the dark with total impunity while stripping member nations of their sovereignty and denying consumers of all their rights and protections, Feierstein explained. “TPP was Obama’s ‘Crown Jewel’ achievement after 35 years of failed neoliberalism funded by oligarchs for the benefit of oligarchies”, he observed.

Are we finally going to see all of Soros’ “foundations” closed down for good, and all his manipulations brought to an end with Trump’s recent actions of stopping the Deep State puppets and puppeteers?

Endgame: Disclosure and the Final Defeat of the Cabal (6)