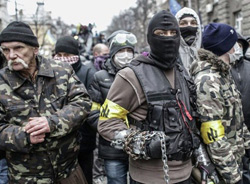 In the beginning of February 2017, renewed heavy fighting has broken out in Ukraine’s Donbass region between government troops (and allied militias, though they are supposed to be nationalized) and the separatists.

Naturally both sides claim the other started it, but it does not take a genius to see who has something to gain from renewed hostilities, and who has nothing at all to gain.

Russia and Vladimir Putin derive no benefit from an armed conflict on Russia’s border, one which Russia is being blamed and punished for by Europe and the United States. And it was Moscow who forced the separatists to the table at Minsk, just when they had the upper hand on the battlefield following Kiev’s massive defeat in the Debaltsevo Pocket.

Now, with the coming to power of Donald Trump as president of the United States, the putschists in Kiev have lost their principal sponsor. Trump has made clear his intention to prioritize relations with Russia – and European statesmen such as leading French presidential candidate François Fillon have begun to echo him. Germany is losing enthusiasm for this headache.

The Ukrainian government is about to find itself isolated with no friend either to the East or to the West.

Enter the malevolent minions of mischief, US senators John McCain and Lindsey Graham.

The dastardly duo made a trip to the Donbass front line just after the New Year, where they gave incendiary speeches egging on Ukrainian troops to restart hostilities. Unbelievably, Graham sought to directly instigate a new attack, speaking these words: „Your fight is our fight, 2017 will be the year of offense. All of us will go back to Washington and we will push the case against Russia. Enough of a Russian aggression. It is time for them to pay a heavier price.”

John McCain was no less provocative: „I believe you will win. I am convinced you will win and we will do everything we can to provide you with what you need to win.”

We do not know what else McCain and Graham promised Poroshenko out of sight of the cameras. But behold, within weeks of this trip, Kiev started a new round of shooting.

The only possible motive for this outbreak of hostilities is a desperate attempt to regain the lagging sympathy of the world – a world long tired of Kiev’s crying wolf over „aggression” and looting billions of money intended to boost its economy. It is also another attempt to sabotage any US-Russian reconciliation.

Many say that John McCain and Lindsey Graham are two men totally bought and paid for by the military-security establishment. They serve the CIA and the Neocon ideologues who want to spread American influence by force and believe in provoking conflict where necessary.

In February 2017, the US President accused the two men of trying to start World War III. 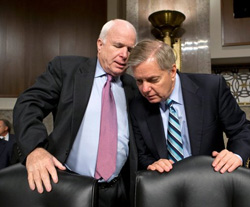 And just before Trump’s inauguration, McCain confessed he had passed a defamatory „report” filled with salacious fake intel to the FBI, doubtless in hopes of wrecking his own president’s new foreign policy towards Russia.

In fact, under the Logan Act, it is a felony for any US citizen to interfere in US foreign policy without „the authority of the United States”. Here is the full text of the act:

This section shall not abridge the right of a citizen to apply himself, or his agent, to any foreign government, or the agents thereof, for redress of any injury which he may have sustained from such government or any of its agents or subjects.

In United States v. Curtiss-Wright Export Corp., 299 U.S. 304 (1936), Justice Sutherland, writing for the Court, observed that the authority to represent the country abroad lies entirely with the president:

„The President alone has the power to speak or listen as a representative of the nation. He makes treaties with the advice and consent of the Senate; but he alone negotiates. Into the field of negotiation the Senate cannot intrude; and Congress itself is powerless to invade it. As Marshall said in his great argument of March 7, 1800, in the House of Representatives, ‘The President is the sole organ of the nation in its external relations, and its sole representative with foreign nations’.”

John McCain and Lindsey Graham do not have the „authority of the United States” to represent the country abroad. They do not have the authority to promise weapons to Ukraine, or to suggest US support for a new offensive. That authority belongs exclusively to the President and his duly appointed officers within the executive branch. (In general, the Secretary of State, ambassadors, and members of the Foreign Service.) There is no indication then-president Barack Obama granted them such authority. And President Donald Trump certainly will not. 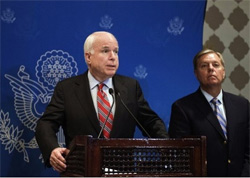 The Logan Act has often been discussed in cases of politicians abroad appearing to interfere in the president’s foreign policy positions. That said, though the law has been on the books since 1799, there has only ever been one prosecution under the act, and it failed.

However, it’s never too late to start.

There has been a power change in Washington. Senators McCain and Graham, and all of their allies in the Congress and on K. Street, better get with the program. Globalism is finished. Neoconservatism is yesterday’s news. Trump and his advisors still believe in American power. But they realize some degree of cooperation with other great powers – principally Russia – is going to be necessary.

During the campaign, Trump’s supporters chanted about Hillary Clinton, „Lock her up!”

That should now be changed to, „Lock them up!”

John McCain and Lindsey Graham are morally depraved warmongers. It is high time they be prosecuted for their crimes and put behind bars.

Video below, Lindsey Graham speaks at the 1min 10sec mark.

How to Remove Negative Energy from Your Home