Draghi’s speech at an investment conference in London in July 2012 boosted markets at the time and forced down Spain and Italy’s borrowing costs after saying: ”
Within our mandate, the ECB (European Central Bank) is ready to do whatever it takes to preserve the euro. And believe me, it will be enough
„. The markets responded because they were effectively being manipulated. 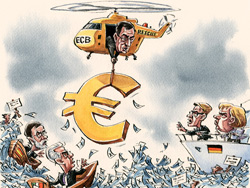 Known as „Outright Monetary Transactions” the scheme was to have been deployed alongside a QE (quantitative easing) program, itself racking up 80 billion euros a month. Several trillion euros later and the EU looks as precarious as ever with the growth of a distant memory.

In Italy, yields on bonds dropped from 6.3 per cent to 1.2 per cent after that famous speech and all seemed good – on the face of it. But deep down, it was not as we had been led to believe. Italy’s government debt grew and is became equal to 133 per cent of GDP. When Ireland imploded and had to be fully bailed out by the ECB, its debt pile was 132.2% of GDP.

With all this intervention, the ECB’s balance sheet ballooned – set to overtake the U.S. Fed Reserve and has then reached over $3trillion according to Bank of America Merrill Lynch (not to be confused with national debt).

Then, totally off the mainstream media radar came news that another Italian bank was on the verge of being disintegrated. And while attention was focused on the rescue of Banca Monte dei Paschi di Siena, which is still not fully finalized, news came that Banca Etruria, has quietly slipped into bankruptcy.

„It was announced (Dec 21st, 2016) that the first part of an investigation concerning fraudulent bankruptcy charges (at Banca Etruria), in which 21 board members are implicated, had been closed. This strand of the investigation concerns €180 million of loans offered by the bank which were never paid back, leading to the regional lender’s bankruptcy and eventual bail-in/out last November that left bondholders holding virtually worthless bonds.”

Next up and out of the blue comes UniCredit, the country’s largest bank. It is seeking to raise €13bn of desperately needed capital but large as though this is, the biggest problems, according to the Financial Times (FT), is that the smaller banks, like Banca Etruria, are in a perilous position and on the verge of falling over the cliff edge.

Italy has banks on every street corner, with more branches per capita than any other OECD (Organization for Economic Co-operation and Development) country. The lack of growth (occurred since it joined the Euro), has suppressed much needed profits on the one hand whilst seeing poor wage growth on the other, causing drastically increased non-performing loans that now add up to an eye-watering €360 billion.

The FT reports that Italian banks „have long sold their own shares and debt to their retail customers as an attractive alternative to savings products, a disgraceful practice that should never have been allowed. It means that ordinary Italians, many in retirement, have already suffered as bank shares have fallen. They will suffer much more in a bail-in.”

The FT is suggesting that a full bail-in is on the cards. TruePublica reported back in September 2016 that banks throughout the EU would simply steal depositors’ money if any of them failed now that new bail-in rules had been implemented. And that is exactly what is happening. 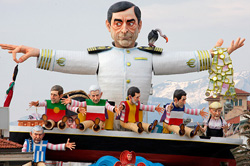 The result of all this is that Mario Draghi, clearly feeling the strain, has finally admitted defeat and said that there is a strong possibility of the EU falling apart. This time the tactic to keep unity was to threaten every country in the EU by stating that leaving the Eurozone would cost dearly and would require any member country to settle its claims or debts with the bloc’s payments system before severing ties. There’s nothing to stop a desperate member country from leaving and simply defaulting.

According to ArmstrongEconomics, „This statement reveals the heated discussion at Davos and the rift that is beginning to spread. This statement, (Draghi) was made in a letter to two Italian lawmakers in the European Parliament.”

Martin Armstrong himself (former chairman of Princeton Economics International Ltd., he is well known for his economic predictions) says: „Southern Europe, which are the weaker economies including Italy, Spain, and Greece, have accumulated huge liabilities to keep the euro afloat while Germany stands out as the biggest creditor with net claims of €754.1 billion euros. This alone may set off the massive capital flight to the dollar. We are looking at the complete collapse of the Quantitative Easing carried out by the ECB since 2008 without any success.”

German Minister for Economic Affairs Sigmar Gabriel (who is also the Vice Chancellor), the most senior Social Democrat in Angela Merkel’s government, also warned in January 2017 that the EU could fall apart if populists in France and the Netherlands win national elections later this year.

So convinced are aides to US President Donald Trump that the EU is on the verge of a breakup that they recently asked EU officials over the phone which countries will be next to leave the bloc after Britain.

In the meantime, the man tipped to be Donald Trump’s ambassador to the European Union has told the BBC the single currency „could collapse” in the next 18 months.

Even the creator of the Euro, professor Otmar Issing, has predicted that Brussels’ dream of a European superstate will finally be buried amongst the rubble of the crumbling single currency he designed accusing eurocrats and German leader Angela Merkel of „betraying the principles of the euro and demonstrating scandalous incompetence over its management” – pointing a finger directly at Mario Draghi’s failing monetary policy.

Economists, commentators, experts and pundits are now divided when it comes to the survival prospects of the Euro in the near term and even that fact alone has considerably worsened since last year (2016). With the head of the ECB Mario Draghi admitting an eventual break-up is a possibility, probability is that much higher than previously ever imagined.