The Ebola virus mysteriously appeared in the Democratic Republic of the Congo (DRC) in 1976 and has sporadically reappeared in the area without explanation ever since. 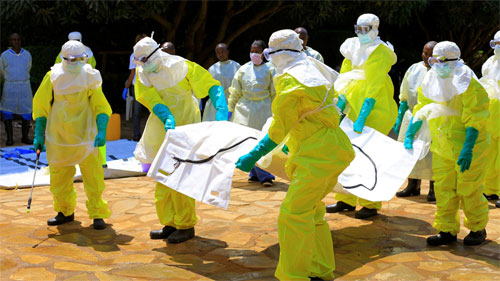 Mainstream medical professionals believe that eating monkeys who are infected with Ebola is the initial mode of transmission.
However this is accepted speculation because the scientific community agrees that the natural reservoir of the virus is unknown and therefore knowledge of transmission is only hypothesized.

In July of 2012, a sudden outbreak of the Ebola virus surfaced, killing 14 people. The World Health Organization (WHO), the Centers for Disease Control and Prevention (CDC) and Uganda’s Ministry of Health came together to control the unexpected eruption.

Ugandan President Yoweri Museveni made a formal statement warning his citizens: “I therefore appeal to you to be vigilant. Avoid shaking of hands; do not take on burying somebody that has died from symptoms which look like Ebola. Instead, call the health workers to be the ones to do it. And avoid promiscuity because these sicknesses can also go through sex.”

Then Dr. Paul Roddy, Medecins Sans Frontieres (MSF), a French charity, asserted that the outbreak of the Ebola virus in Uganda has been stabilized, however an additional outbreak could erupt in another location. Roddy believes that natives eating bush-meat were the catalyst for spread. He assumes that monkeys who have eaten infected bats, that were then consumed by Ugandans was the chain of infection.

Eight days later, in the DRC, a new strain of the Ebola virus has surfaced according to medical volunteers from MSF. It is not the same strain as was discovered in Uganda. This new epidemic is being monitored because “not every person who develops the disease will develop clear symptoms that are recognized as Ebola. For the moment it seems that there are not that many cases but the exact number of cases is unknown,” said Anja de Weggheleire, representative of MSF.

Overseen by the US Department of Defense (DoD) under the Transformational Medical Technologies program (TMT) of the Defense Threat Reduction Agency and the National Institutes of Health (NIH) have spent millions of dollars conducting scientific research into the Ebola virus, its potential for being turned into a bio-weapon and certain vaccine efforts through two drug corporations, Massachusetts-based Sarepta Therapeutics and Tekmira Pharmaceuticals of Canada. Then the funding was abruptly cut.

The TMT creates relationships with private sector biotech firms, pharmaceutical corporations and academic institutions, as well as other government agencies to advance biological warfare, research viral and biological weapons and estimate threat levels of all biological agents based on ability to infect and effectiveness of devastation.
The DoD suddenly stopped funding Ebola vaccine research through these two corporations due to financial constraints.

With the sporadic nature of Ebola outbreaks, combined with the absolute deadly nature of the virus makes it a hard sell to large pharmaceutical corporations because it “isn’t a huge customer base and big pharma is obviously interested in big profits. So these niche products which are important for biodefense are really driven by small companies,” according to Larry Zeitlin, president of Mapp Biopharmaceuticals, who is developing therapies to combat Ebola.

Mysteriously, microbiologists and virologists who were involved with research into immunology and bioweapons have either gone missing or found dead over two decades. Some of these scientists had ties to the Howard Hughes Medical Institute, the NIH, the DoD – just to name a few. While the number of experts involved in infectious disease research having died under questionable circumstances has risen exponentially, the US government has remained nonchalant.

In November of 2002, DynCorp was given a $322 million contract to develop, produce and store vaccines for the DoD. DynCorp has been connected to PROMIS, a software program designed to identify and target specific individuals for operations known only to the US government.

One of the most shocking calls for depopulation came from Dr. Eric R. Pianka, scientist at the University of Texas back in 2006. Pianka was speaking to an audience of fellow scientists, students, and professors when he proclaimed that 90% of the world’s population needed to be killed using a weaponized form of the Ebola virus. 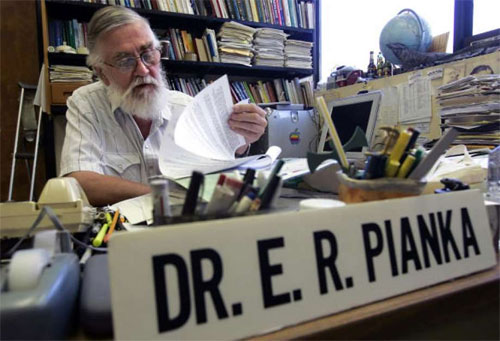 He stated that an airborne version of Ebola would be more effective than the HIV/AIDS virus has been since its release in 1979 because of the speed in which the victim dies. If Pianka’s nightmare scenario were to be carried out, how could it be done with the most efficiency and impact?

During the hype over possible 2012 Olympic Games terrorist schemes, the Lieutenant Colonel Brian Fahy advised the UK government that it was “feasible” that drones equipped with biological weapons could be remote-controlled and aimed over the skies of London during the Games.

Fahy said: “An Unmanned Aerial Vehicle (UAV) can be put in a backpack. They come in all sorts of sizes and it’s feasible they could be filled with something noxious and flown by remote control.”
In preparation for the possibility, Elite soldiers wore biochemical suits, gloves and masks during training exercises provided by a top-secret military research facility in Porton Down, Wilshire.
Fahy explains: “We have worked up a comprehensive plan to protect against the potential hijacking of a commercial airliner down to slow-moving microlights or radio-controlled planes.”

Due to the National Defense Authorization Act (NDAA), 6 national drone test sites were established to coincide with the Department of Homeland Security (DHS) announcement that by 2015 at least 30,000 drones will be in American skies surveying US citizens in the name of safety, according to Janet Napolitano.
Obama signed the FAA Modernization and Reform Act in February 2012, demanding that the FAA “integrate operation of drones” into National Airspace by 2015.
These drones had to get in civilian airspace, with “the potential for invasive surveillance of daily activities,” said House Representative Ed Markey.

In June 2011, researchers at the University of Texas demonstrated to officials at the DHS how drones could be hacked into through their navigation systems.
By sending a false Global Positioning System (GPS) signal the drones were tricked into taking a different course.

To infect a large amount of people (like the population of a large US city) with a bio-weapon like the Ebola virus, drones could be used to spray over-head with ease. Because of the immediacy of infection, the population of cities affect would experience a dramatic reduction nearly instantly.
In fact, it would take nearly a week for officials to even respond to this type of pandemic and by that time, thousands of Americans would be have succumbed to the Ebola virus.

Because of the effectiveness of the mortality rate of the Ebola virus, it is the perfect bio-weapon. And if combined with the implementation of drones in US and worldwide skies, could this be a combination we should be concerned about?

Globalists like Ted Turner and Bill Gates have already stated publicly that they want a significant amount of the world’s population reduced – even as far as by 90% – in the name of climate change and reallocation of resources. How could they accomplish such a feat without the aid of a bio-weapon? And furthermore, how could they ensure that large enough amounts of the population are exposed to the bio-weapon for maximum effect?

Perhaps aerial drones equipped with the Ebola virus would be flown over cities, then the global elite could sit back and wait. Once the virus has killed the majority of the population, the next agenda for global governance can unfold.

Nikola Tesla Quotes Proving How Great Genius He Really Was