Nikola Tesla Quotes Proving How Great Genius He Really Was

Nikola Tesla – we all know him as the ‘Mad Scientist’. But he changed the world. His famous creation is the Tesla Coils which founded wireless technology. He also discovered the rotating magnetic field and developed the alternating current electric system. So, we can credit our Wi-Fi and electricity in our homes to this man. 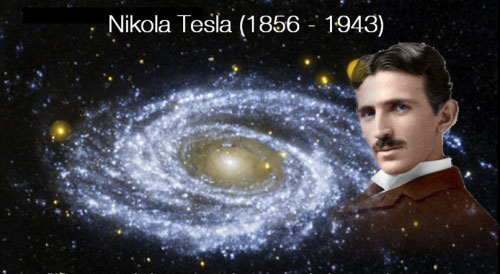 He had never really married and was a recluse. Plus, he never wrote down many of his works. So, many people took advantage of his work and used it as their own invention. But Tesla was not a fan of money. He wanted to change the world. Which he eventually did.

Here are some inspiring quotes that might help you unravel the mysterious man:

1. “We crave for new sensations but soon become indifferent to them. The wonders of yesterday are today common occurrences.”

The effect of the new is often very short-lived. It comes fast and then, the effect just ceases. Wonders are not always wonderful.

2. “Today’s scientists have substituted mathematics for experiments, and they wander off through equation after equation and eventually build a structure which has no relation to reality.”

The problem with structured thinking or theoretical thinking. You develop ideas which have no basis in reality.

3. “The feeling is constantly growing on me that I had been the first to hear the greeting of one planet to another.”

If you can connect with your inner self, your imagination, and the universe – you can listen to things beyond the earthly dimensions.

4. “You may live to see man-made horrors beyond your comprehension.”

You have to be prepared for the worst. The people of the 1930s did not know that the greatest war was right around the corner.

5. “The scientists of today think deeply instead of clearly. One must be sane to think clearly, but one can think deeply and be quite insane.”

Thinking deeply is not as necessary as to have clarity to your thoughts. That is what’s really important.

6. “The scientific man does not aim at an immediate result. He does not expect that his advanced ideas will be readily taken up. His work is like that of the planter – for the future. His duty is to lay the foundation for those who are to come and point the way. He lives and labors and hopes.”

A man of science may not be able to get immediate outcomes. Especially if they come out with something earth-shattering. All they have to do is plant the idea for future generations.

7. “Let the future tell the truth, and evaluate each one according to his work and accomplishments. The present is theirs; the future, for which I have really worked, is mine.”

The future will tell you whether your work has actually brought in some fruits or not. Work well in the present, own the future.

8. “Every living being is an engine geared to the wheelwork of the universe. Though seemingly affected only by its immediate surrounding, the sphere of external influence extends to infinite distance.”

Every living being is somehow connected to the universe. Every little happening in the universe affects us. 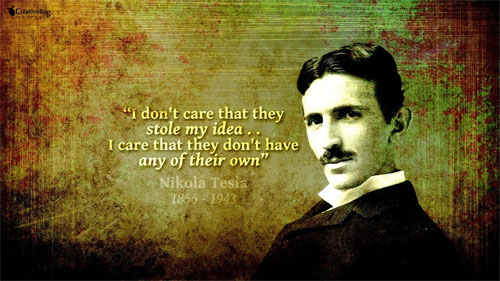 Creativity is important in a scientist. If you steal ideas and claim it as your own – it’s scary for the world of science.

10. “My method is different. I do not rush into actual work. When I get an idea I start at once building it up in my imagination. I change the construction, make improvements, and operate the device entirely in my mind.”

Different methods are what brings different innovations. Just look at things differently. Use your imagination.

11. “I do not think you can name many great inventions that have been made by married men.”

Marriage requires time to be dedicated to your spouse. Inventors don’t have time, their mind is always thinking about new inventions.

12. “The progressive development of man is vitally dependent on invention. It is the most important product of his creative brain.”

Creativity is what can bring progress to humankind. Nothing else.

Books are the seat of knowledge. To be truly creative, read books. Read in between the lines too.

14. “There is something within me that might be an illusion as it is often cased with young delighted people, but if I would be fortunate to achieve some of my ideas, it would be on the behalf of the whole of humanity.”

15. “If your hate could be turned into electricity, it would light up the whole world.”

We have so much hate in us that we can easily make the world light up if we could translate it to electricity. Would save a lot of bills too!

16. “Genius is its own passport and has always been ready to change habitats until the natural one is found.”

Genius is not fixed. It can adapt to the changes around it.

17. “My brain is only a receiver, in the Universe, there is a core from which we obtain knowledge, strength, and inspiration.”

The universe has all the knowledge. The laws of physics and chemistry is all up there. Your brain is just understanding it.

18. “A new idea must not be judged by its immediate results.”

A new idea does not always bring instant results. It changes the future.

19. “Our virtues and our failings are inseparable, like force and matter. When they separate, man is no more.”

Both failure and accepting it with virtue is important. Separating them will destroy us.

20. “One’s salvation could only be brought about through his own efforts.”

If you are truly looking for salvation, you must work for it yourself.

21. “All that was great in the past was ridiculed, condemned, combated, suppressed – only to emerge all the more powerfully, all the more triumphantly from the struggle.”

Ideas have always been suppressed because they would change the world dramatically. Nobody likes to change. But if it’s a good idea, it will bring a more powerful change eventually.

We are humankind. Only our fears and ego tends to separate us from each other.

23. “If you want to find the secrets of the universe, think in terms of energy, frequency, and vibration.”

The universe is build up of vibration, frequency, and energy. We need to think in those terms to find the secret.

24. “Misunderstandings are always caused by the inability of appreciating one another’s point of view. This again is due to the ignorance of those concerned, not so much in their own, as in their mutual fields.”

If we are living in the globalized world, we have to allow different thought processes to intermingle, even if they are not something that sits well with us. That’s how we fight ignorance and narrow-mindedness.

Love is not selfish. It is supposed to be given out more.