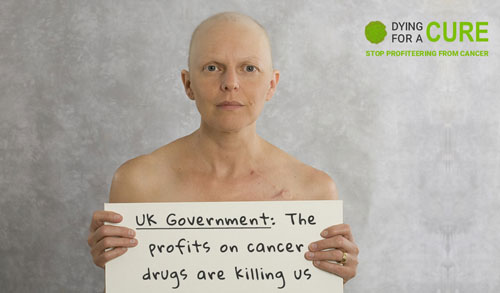 After a three-year battle, John Piears lost his 41-year-old wife Beata to ovarian cancer in October 2015. In her memory, he launched the Dying for a Cure campaign against profiteering drug companies.

To promote the campaign and encourage users to sign his petition, the father-of-two from West Horsley used an image of a cancer patient with a scar near her collarbone from the cancer treatment. In the picture, the woman is holding a sign over her bare chest with the slogan: UK Government: The profits on cancer drugs are killing us.

While the picture clearly doesn’t evoke any sexual feelings, Facebook banned the advert because it showed “excessive amounts of skin or suggestive content”.

Dying for a cure

When she was 38, dental nurse Beata was diagnosed with ovarian cancer. According to her husband, Beata desperately wanted to live and was quite literally dying for a cure. Willing to try everything possible, she underwent two major surgeries, 12 grueling chemotherapy sessions and participated in demanding clinical trials of experimental drugs.

Unfortunately, she lost the battle against cancer. Even though millions, if not billions, of dollars each year are pumped into cancer research, a long-term cure has still to be found.

Because the whole system is crooked, John founded the Dying for a Cure campaign to raise awareness of how the medical system has no incentive to find a cure, but merely prescribes expensive treatments to extend life for a few months.

While our society seemingly has accepted cancer as an inevitable part of modern life, pharmaceutical companies are laughing their way to the bank. In 2014, the revenues for cancer treatments passed the $100 billion mark, and they were expected to rise to $147 billion in the coming two years. 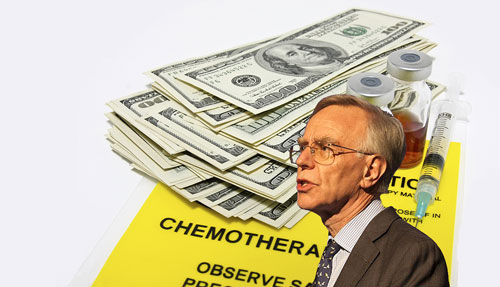 As John wrote on his website: “The people looking for cancer cures (the pharmaceutical companies) have nothing to gain by developing them, but plenty to lose”.

His experience and the bare facts motivate him every day to expose the criminal, profit-led practices of the drug industry and push for honest research to find a real cure.

Paid Facebook posts are one of his major promotional strategies to raise awareness for the campaign, however by banning his adverts, Facebook wasn’t exactly showing any support to spreading the word.

On July 8, 2016, John Piears received a message from Facebook saying that his paid advert couldn’t be approved as it violated advertising policies by featuring a photo containing too much bare skin.

They further noted that Facebook does not allow images that either portray people in explicit positions or show nudity or cleavage – even if they are used for artistic or educational reasons. They recommended using less sexual content to promote his cause.

Shocked and outraged, John contacted Facebook and highlighted the fact that the picture was being used for his cancer campaign and portrayed a cancer patient in a non-sexual way.

“I felt very deflated when I saw that Facebook suspended any promotion of this post, as there had been an excellent response to it”, he told the Daily Mail.

However, when Facebook was approached for comment, the company quickly admitted it had made a mistake by banning the advert. A spokesman said that Facebook supports people and organizations campaigning for the things that matter to them, and that the Dying for a Cure post is an excellent example of that.

Furthermore, they apologized for the inconvenience it may have caused and reinstated the advert with the photo.

Non-GMO crop circles showing up in corn fields in Nebraska