Non-GMO crop circles showing up in corn fields in Nebraska 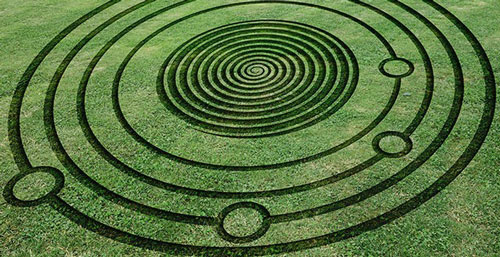 An American company has hit on a novel way to promote its non-GMO corn snacks while raising awareness concerning the dominance of GM agriculture in the country – by using crop circles as an advertising medium.

Our Little Rebellion – a company that sells a line of non-GMO corn snack products called PopCorners – has joined up with Nebraska farmer Jim McGowan to create a giant message in his cornfield urging people to “Join The Corn Revolution”.

The nine-acre crop artwork also features a large-scale version of the PopCorners website address and the logo of the Non-GMO Project, an organization that verifies Our Little Rebellion’s products.

Courtney Pineau, associate director of the Non-GMO Project, said: “It’s super creative – we’re really excited about it. I’ve never really seen a brand undertake an endeavor like this, so that’s one of the things that we really loved about it”.

The project involved some high-tech GPS mapping, a crop circle artist and a week of hand-cutting corn by a team of 15 people.

A drone camera captured the creation of the artwork, as seen in the video below.

Fifth-generation farmer McGowan said: “We’re really excited to be able to see the whole circle here come into effect. Most of the time in production agriculture, it’s treated as a regular raw commodity and you don’t even know what happens to it. To see the actual chain complete with this product from that field is really special.”

From Eco Salon: “The project seeks to draw attention to the baffling 92 percent of American corn acreage currently being grown with genetically modified seeds – and to Our Little Rebellion’s efforts to source the 20 million pounds of corn it uses annually from the other eight percent.”

To manufacture its products, Our Little Rebellion has had to take a creative approach, partnering with dozens of small farmers like McGowan to restructure supply chains so that they can obtain enough non-GMO corn to keep production steady.

The Non-GMO Project says that the growing demand for non-GMO corn, soybean and canola is encouraging more farmers to plant non-GMO crops.

Despite massive lobbying and propaganda campaigns on the part of the GM agriculture industry, Americans have consistently spoken out in favor of GMO labeling and the right to have a choice between purchasing GMO and non-GMO foods.

There is a market for natural, organic, GMO-free foods, and those who are willing to put the time and effort into developing these products and the supply chains to support them are likely to be rewarded in the long run.

Public awareness of the issues surrounding GMOs is growing. More people than ever now realize that the industry has failed to live up to its promise to “feed a hungry world”.

GMO crop yields are not bigger, the GM agricultural model hurts small farmers and poisons the planet with glyphosate, and GM cross-contamination and the development of herbicide-resistant superweeds are threatening the entire agricultural spectrum – and the public is finding out about it.

The GMO deception is no longer sustainable, just as GM crops are not a part of a truly sustainable agricultural system. The sooner food producers realize that and begin giving the public what it wants – i.e. healthy, organically-raised, sustainable food products – the more chance they will have to survive and thrive in an evolving and highly competitive marketplace.

The demand for healthy food is real, and the market will eventually be forced to meet that demand.