Former CIA Director James Woolsey: ‘US meddles in foreign elections – but only for a very good cause’

“I don’t see why we need to stand by and watch a country go communist due to the irresponsibility of its own people.” – Henri Kissinger, US Secretary of State and National Security Advisor under Richard Nixon and Gerald Ford.

“We had bags of money that we delivered to selected politicians, to defray their political expenses, their campaign expenses, for posters, for pamphlets.” – CIA Officer F. Mark Wyatt.

“If the Chinese indeed tried to influence the election here… The United States is only getting a taste of its own medicine.” – Peter Kornbluh, Director of the National Security Archive. 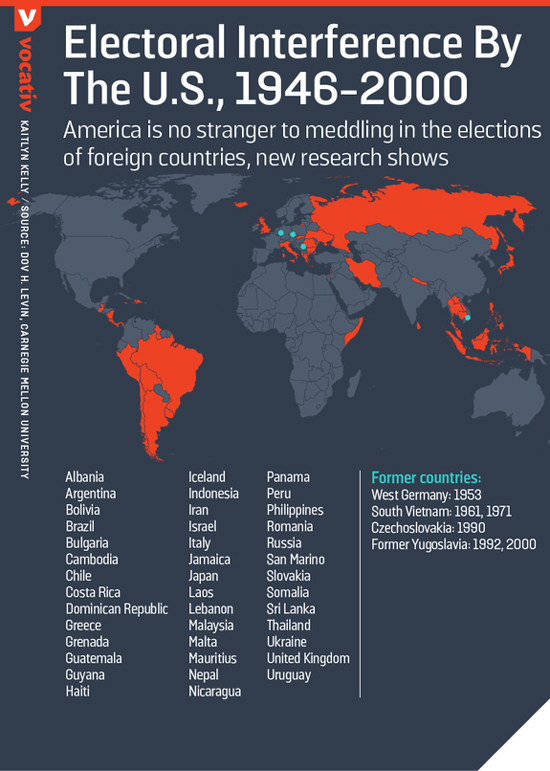 Former CIA Director James Woolsey told Fox News political commentator Laura Anne Ingraham that the United States interferes in other countries elections, but “only for a very good cause” and always “in the interests of democracy”.

When asked by Laura Ingraham on her Fox News show on February 16 (2018) whether the U.S. interferes in other countries’ elections, former CIA Director James Woolsey burst out laughing. Here is – verbatim – the end of the interview:
“Have we ever tried to meddle in other countries’ elections?” Ingraham asked.
“Oh, probably” Woolsey replied. “But it was for the good of the system in order to avoid the communists from taking over. For example, in Europe, in ’47, ’48, ’49, the Greeks and the Italians. We, CIA.”
“We don’t do that anymore though? We don’t mess around in other people’s elections, Jim?”
“Well… Only for a very good cause.”
And then they both laughed.

Not everyone is amused… The Russia Embassy in London posted the following tweet in reply: 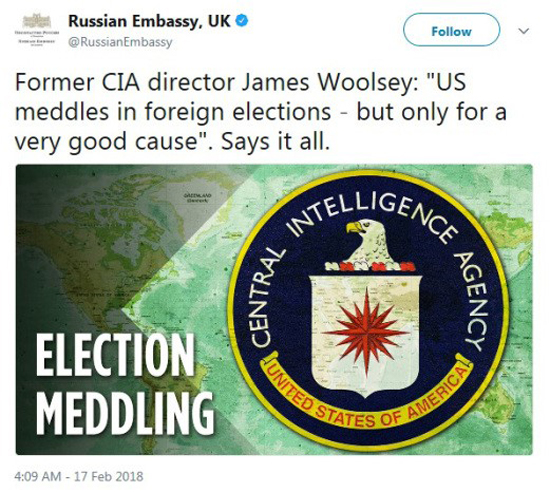 American lawmakers have expressed deep outrage that a foreign government would seek to influence a U.S. election.
The U.S. intelligence community reached the conclusion that Russia meddled in the 2016 U.S. election. Special counsel Robert Mueller’s indictment charges that the Russian influence operation began in 2014.
Speaking at the Munich Security Conference, Sergei Lavrov – the Foreign Minister of Russia – once more denied the charges as absurd.

Assuming for the sake of argument that Russia indeed tried to influence the election, many will argue that “The United States is only getting a taste of its own medicine” as Peter Kornbluh said.

Dov Levin, a postdoctoral fellow at the Institute for Politics and Strategy at Carnegie-Mellon University, found that the U.S. attempted to influence the elections of foreign countries as many as 81 times between 1946 and 2000.

Levin’s figures do not include military coups or regime change attempts following the election of a candidate the U.S. opposed, such as when the CIA helped overthrow Mohammad Mosaddeq, Iran’s democratically elected prime minister, in 1953.
By Levin’s count, Russia attempted to interfere in other countries’ elections 36 times between the end of World War II and the end of the 20th century.

Even after the Soviet Union collapsed in 1991, the U.S. continued its interventions abroad, including elections in Israel, former Czechoslovakia, and even Russia in 1996, Levin found.
Since 2000, the U.S. has attempted to sway elections in Ukraine, Kenya, Lebanon, and Afghanistan, among others.

CIA messing around with other nations’ elections?