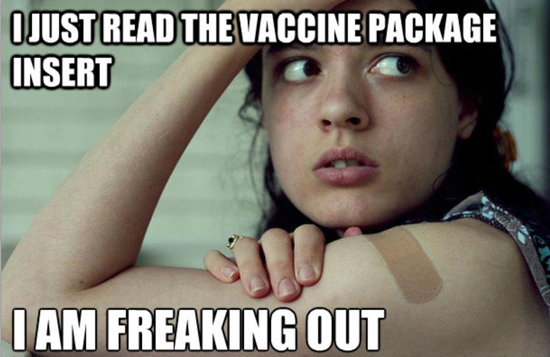 You may have heard Cobra recently mention that directed energy weapons have been used to attack many light workers, including doctors. The doctors they attack, some very young, who suddenly get heart attacks, have either been advocates of alternative healing methods for cancer etc. or worked openly in their practices against vaccinations.

In the early 90s a lecture has been held by the then most knowledgeable person regarding vaccines and their dangers, namely Viera Scheibner, PhD, who visited three places in Sweden. Believe it or not, at that time (approx. 1990-91) she was employed by the Australian State because of her great knowledge to teach newly graduated medical doctors about the dangers of over vaccination!

She became interested in vaccines in the mid-1980s while studying babies’ breathing patterns with her late husband, Leif Karlson.
If you knew the depth of her research you would have no reason to disbelieve her. She and her husband (a technical engineer) made the findings after he had created a warning system for babies’ cots, to warn parents if the child was having breathing problems. People were scared that their babies might suddenly die unexplainable deaths when “cot deaths” were on the increase at that time in Australia (and actually worldwide!).

Their amazement and shock was big on discovering that within a few weeks, or even days after children got vaccinations, they all had breathing difficulties in sleep, many of which led to “cot death”. This led to start Viera Scheibner’s long study of every available (many world renowned) medical journals, regarding their studies of vaccine campaigns and so-called success stories etc. to find that it was all “doctored” to look good.

Below is an introduction to her that can be found online: 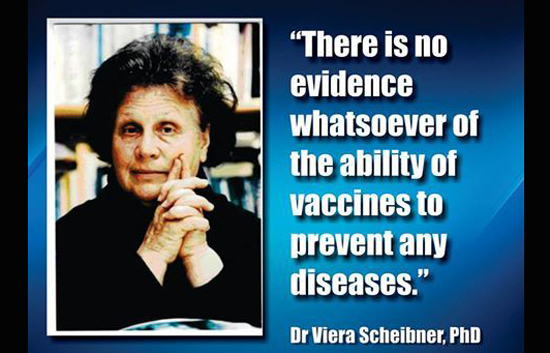 Following vaccinations, babies’ breathing patterns often triggered alarms, and indication of stress. This is what prompted her interest in vaccines. She then began extensive research of medical papers dealing with vaccinations. To date, she has collected and studied more than 100,000 pages of medical papers published over the last century. From her research, she has concluded that there is no scientific evidence that vaccines are anything other than harmful.

She says that vaccines increase susceptibility to the very diseases they are intended to protect against, and they make the recipient more susceptible to disease of all kinds – infectious diseases and the newfound modern ills of childhood such as diabetes, auto-immune diseases, cancers, and developmental disabilities along with other health problems.

Her research into vaccination has produced two books and numerous papers published in a variety of scientific and medical publications. She also conducts frequent international lecture tours to present the results of her research to parents, health and medical professionals, and anyone else who is interested. She has also been an expert witness for court cases relating to deaths and injuries caused by vaccines that are attributed to other causes such as the so-called “shaken baby” syndrome.

It is officially admitted that all cases of polio in the US, since the introduction of the vaccine, are caused by the vaccine. The same has been seen in Australia and other countries like England. So, the occurrence of the same phenomenon all around the world would be asking too much of coincidence.

In the USA in 1978, the authorities mandated vaccination and it resulted in a threefold increase in the reported incidence of whooping cough.

During a 3-year period, November 1964 to December 1967, 124 lots of human kidney cell cultures were examined, and seven viruses (6%) were isolated. These included two measles viruses, two foamy viruses, one reovirus, one adenovirus, and one myxovirus.

A lot of viruses (and other organisms) and their cytopathic effects simply escape detection. Herpesvirus group viruses were isolated in monkeys of the Old World species represented by herpes B or Herpesvirus simiae produced a naturally occurring mild infection. However, most human cases of B virus infection have been fatal.

Hull and Nash showed that 10% of newly caught rhesus monkeys had antibodies to the B virus, and the percentage rose to 60% to 70% when the monkeys were confined in “gang-cages”. Other studies indicate that 100% of the experimental monkeys showed B virus antibody rise when the monkeys were housed together over a period of 6 weeks. Vaccine cultured on their kidney were contaminated by all these viruses and then injected into millions of infants all over the world. It is a real horror story.

Just how much longer are we going to let the vaccine producers get away with destroying the human immune system and even the genetic code, and literally get away with murder?

Former CIA Director James Woolsey: ‘US meddles in foreign elections – but only for a very good cause’