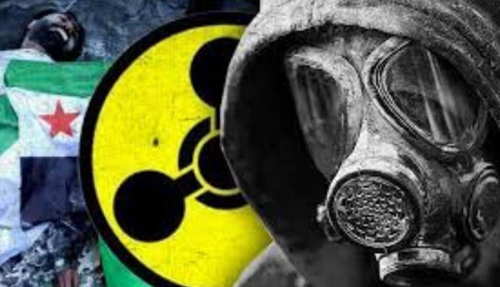 Scott Ritter – a former Marine Corps intelligence officer who served in the former Soviet Union implementing arms control treaties, in the Persian Gulf during Operation Desert Storm, and in Iraq overseeing the disarmament of weapons of mass destruction – has recently examined the vacuous claim that Assad used chemical weapons on his own people and found it to be a categorical lie.

After debunking the sarin gas myth, Ritter moved on to deconstruct claims by covert organizations such as the White Helmets: “The White Helmets came into existence in the aftermath of the unrest that erupted in Syria after the Arab Spring in 2012. They say they are neutral, but they have used their now global-platform as a humanitarian rescue unit to promote anti-regime themes and to encourage outside intervention to remove the regime of Bashar al-Assad. By its own admission it is well-resourced, trained and funded by western NGOs and governments, including USAID (U.S. Agency for International Development), which funded the group $23 million as of 2016.

A UK-based company with strong links to the British Foreign Office, May Day Rescue, has largely managed the actual rescue aspects of the White Helmet’s work. Drawing on a budget of tens of millions of dollars donated by foreign governments, including the U.S. and UK, May Day Rescue oversees a comprehensive training program designed to bring graduates to the lowest standard – Light, or Level One – for Urban Search and Rescue (USAR).

Personnel and units trained to the ‘light’ standard are able to conduct surface search and rescue operations – they are neither trained nor equipped to rescue entrapped victims. Teams trained to this standard are not qualified to perform operations in a hazardous environment (such as would exist in the presence of a nerve agent like Sarin.)

The White Helmets have made their reputation through the dissemination of self-made videos ostensibly showing them in action inside Syria, rescuing civilians from bombed out structures, and providing life-saving emergency medical care (it should be noted that the eponymously named Oscar-nominated documentary showing the White Helmets in action was filmed entirely by the White Helmets themselves, which raises a genuine question of journalistic ethics.) To the untrained eye, these videos are a dramatic representation of heroism in action. To the trained professional (I can offer my own experience as a Hazardous Materials Specialist with New York Task Force 2 USAR team), these videos represent de facto evidence of dangerous incompetence or, worse, fraud.”

The White Helmets, argues Ritter, are not equipped “to conduct rescues of entrapped victims. And yet the White Helmets videos depict their rescue workers using excavation equipment and tools, such as pneumatic drills, to gain access to victims supposedly pinned under the weight of a collapsed building.”

“The techniques used by the White Helmets are not only technically wrong, but dangerous to anyone who might actually be trapped – the introduction of excavators to move debris, or the haphazard drilling and hammering into concrete in the immediate vicinity of a trapped victim, would invariably lead to a shifting if the rubble pile, crushing the trapped victim to death. In my opinion, the videos are pure theater, either staged to impress an unwitting audience, or actually conducted with total disregard for the wellbeing of any real victims.”

The White Helmets have been caught red-handed before. In short, the White Helmets and the Trump administration are working for the Israeli regime in Syria. As Haaretz has recently pointed out: “U.S. Amassing Spy Planes Off Syria, Aircraft Carrier to Arrive in Israel.” What we are seeing again and again is that Trump took the people who voted for him and deliver them to the Israeli regime. This is why the war in Syria is still going on. And this is why Russia had to step in.