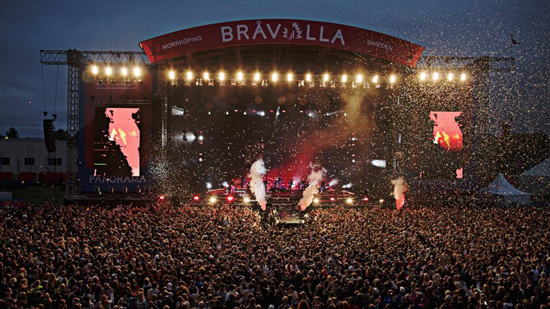 Organizers of Sweden’s Bråvalla annual music festival have decided to call off the 2018 event after this year’s festival (2017) was marred by sexual violence. Police say they are looking into over a dozen reports of molestation and at least four cases of rape.

Swedish police have confirmed they are investigating four potential rapes and some 22 counts of molestation reported on the grounds of the three-day musical festival, which concluded July 1 near the southern Swedish town of Norrkoping.

A teenage girl was reportedly sexually assaulted at the festival during a music concert, police said. They added that they are also looking into multiple reports of molestation during the performance by local musician Håkan Hellström.

As news of the incident hit the headlines, the company in charge of the festival, FKP Scorpio, issued a statement, denouncing the violence and announcing that the event was being canceled next year.

“Words cannot describe how incredibly sad we are about this, and we most seriously regret and condemn this. This is not ‘all right’ under any circumstances. We do not accept this at our festival”, the statement reads.
Saying that they have done “everything in our power” to prevent sexual violence at the festival, the organizers argued that the problem itself goes far beyond Bråvalla and music festivals in general, and concerns Sweden as a whole.

“It is a huge social problem that affects every part of our society. Absolutely not just festivals. There are about a hundred rapes every day in Sweden and it is a challenge that society has to face,” the organizers said.

The company denied media reports that event’s cancellation was triggered by financial losses it suffered last year and not security or ethical concerns.

“Obviously, it’s not good financially to run a festival associated so strongly with violence and insecurity. But to say that we use violence as an excuse for not doing it next year is remarkable and cynical speculation”, the company said in a press release.

Sex crime allegations, meanwhile, continued to pile up, with police announcing that another three women had reported incidents to law enforcement.

A woman told officers she had been attacked by two men on a road leading from the festival camp and gang raped, according to police spokesman Thomas Agnevik.

Another alleged victim said she was also raped during the Hellström concert. Police believe there is no link between her case and that of the first victim, save from the same time and venue.

In a fourth case, a woman complained to police of a consensual sexual encounter going horribly wrong, when a male partner refused to stop despite her pleas.

So far, police have not identified suspects in any of the cases, but commented the decision by the organizers to put the event on hold.

“It is my personal opinion that if you cannot carry out a festival without there being a crime victim, there should not be a festival,” Agnevik, the police spokesman, told Expressen.

Commenting on the spate of violence at the festival, Swedish Prime Minister Stefan Lofven called the reported crimes “disgusting acts” that must be stopped.

“Festivals should be a place of joy – for everyone. It will require strong action from the community, organizers, police, parents and from us if we are to put an end to sexual violence against women,” he said.

The festival had attracted notoriety for its history of rape incidents. Last year, it courted controversy after five rapes and a number of assault and groping incidents were reported to police.

Illness: Call to Transformation and Awakening