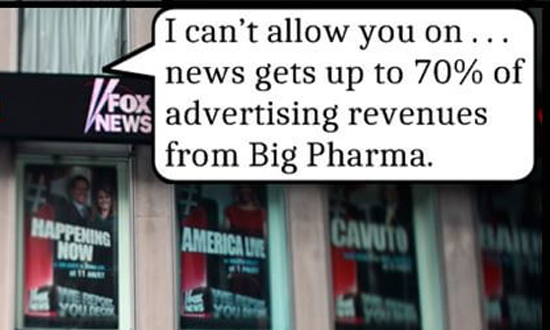 In February 2018 BlacklistedNews.com published an article written by Matt Agorist titled Fox News Cuts Off Reporter When She Links Psychotropic Drugs to Florida Shooter. In it, Agorist went into detail about how most of the mass shooters we’ve witnessed over the past few years were all reportedly taking mind-altering prescription drugs, a fact that he goes on to imply Fox News may not want its viewers to know.

As evidence, Agorist cited a recent segment on Sean Hannity’s television show, in which the conservative commentator cut off his guest, Gina Loudon, the second she tried to mention Nikolas Cruz’s association with SSRIs.

“I think we have to take a hard look at one thing we’re not talking about yet too, Sean, and that is psychotropic drugs,” Loudon said at one point during the interview. She continued, “My guess is, we’ll find out like most of these shooters…” but that’s all she had a chance to say before Hannity interrupted her.

Hannity then moved from Gina Loudon to the doctor that was sitting next to her, and in the blink of an eye, what looked to be the start of a conversation regarding the role big pharma plays in mass shootings was effectively silenced.

Agorist went on to remind his readers that it is “no secret that the pharmaceutical industry wields immense control over the government and the media,” and that “it is their control which keeps any negative press about their dangerous products from airing.”

Of course, whether or not Hannity intentionally interrupted Gina Loudon specifically to stop her from discussing psychotropic drugs is up in the air – he may have been trying to steer the conversation away from a certain talking point, or it all may have just been a coincidence.

Regardless, one thing we do know is that there is likely some kind of connection between mass shootings and prescription drugs, considering the fact that, as Matt Agorist pointed out in his article, Stephen Paddock, Omar Mateen, Gavin Long, Eric Harris, Dylan Klebold, James Holmes and Nikolas Cruz were all taking them before they carried out their attacks.

In a piece titled Florida school shooting suspect was ex-student who was flagged as threat, the Miami Herald quoted a former sister-in-law of the family, who said that “she believed Nikolas Cruz was on medication to deal with his emotional fragility.”

While we’ll never be able to stop one hundred percent of school shootings, it would seem that at the very least, our country should be having a discussion on psychotropic drugs and trying to determine the best course of action moving forward.

Yet every single time a mass shooting occurs, the only thing that those on the left ever seem to want to talk about is gun control. They’re quick to propose the usual laundry list of firearm restrictions and regulations, from banning AR-15s to closing the so-called “gun show loophole” and everything in between.

What’s worse is that the second someone on the right suggests that the solution to gun violence is anything other than gun control, the left accuses that person of not being serious about saving the lives of children. Thus, having conversations about things that would truly solve the problem is nearly impossible.

When the liberals say that something must be done to minimize the number of these mass shootings like the one we recently witnessed in South Florida, they are absolutely correct. However, more gun laws simply aren’t going to get us anywhere; we must get serious about this issue, and talk about the things that need to be talked about.