Steve White, stepping down as chair, said the society is thwarting progress of women and BAME people 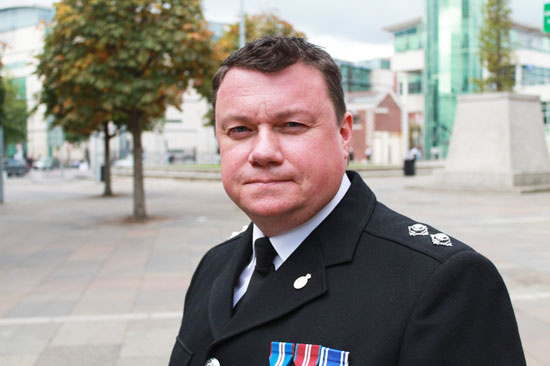 Steve White, who has been chair of the Police Federation for three years

“Reform in policing is being blocked by members of the Freemasons, and their influence in the service is thwarting the progress of women and people from black and minority ethnic communitiesˮ, the leader of rank-and-file officers has said.

Steve White, who steped down in December 2017 after three years as chair of the Police Federation, told the Guardian he was concerned about the continued influence of Freemasons.

White took charge with the government threatening to take over the federation if it did not reform after a string of scandals and controversies.

Critics of the Freemasons say the organisation is secretive and serves the interests of its members over the interests of the public. The Masons deny this saying they uphold values in keeping with public service and high morals.

White told the Guardian: “What people do in their private lives is a matter for them. When it becomes an issue is when it affects their work. There have been occasions when colleagues of mine have suspected that Freemasons have been an obstacle to reform.ˮ

“We need to make sure that people are making decisions for the right reasons and there is a need for future continuing cultural reform in the Fed, which should be reflective of the makeup of policing.”

One previous Metropolitan police commissioner, the late Sir Kenneth Newman, opposed the presence of Masons in the police.

White would not name names, but did not deny that some key figures in local Police Federation branches were Masons.

White said: “It’s about trust and confidence. There are people who feel that being a Freemason and a police officer is not necessarily a good idea. I find it odd that there are pockets of the organisation where a significant number of representatives are Freemasons.”

The Masons deny any clash or reason police officers should not be members of their organisation.

Mike Baker, spokesman for the United Grand Lodge, said: “Why would there be a clash? It’s the same as saying there would be a clash between anyone in a membership organisation and in a public service. We are parallel organisations, we fit into these organisations and have high moral principles and values.”

Baker said Freemasonry was open to all, the only requirement being “faith in a supreme being”. He said there were a number of police officers who were Masons and police lodges, such as the Manor of St James, set up for Scotland Yard officers, and Sine Favore, set up in 2010 by Police Federation members.

One of those was the Met officer John Tully, who went on to be chair of the federation and, after retirement from policing, is an administrator at the United Grand Lodge of England.

Masons in the police have been accused of covering up for fellow members and favouring them for promotion over more talented, non-Mason officers.

White said: “Some female representatives were concerned about Freemason influence in the Fed. The culture is something that can either discourage or encourage people from the ethnic minorities or women from being part of an organisation.”

The federation has passed new rules on how it runs itself, aimed at ending the fact that its key senior officials are all white, and predominantly male.

White said he hoped the new rules would lead to an end to old white men dominating the federation: “The new regulations will mean Freemasons leading to an old boys’ network will be much less likely in the future.”

White came to be chair of the Police Federation after Theresa May went to its 2014 conference and ripped into it. The federation had to decide whether it would adopt a package of 36 reforms, with May, who was then home secretary, threatening that if it failed to do so, it would be taken over by the government and forced to. The Metropolitan police federation was the only local body in the organisation, which represents rank-and-file officers, not to back a package of reforms.

In 2014 federation members felt the body that represented them was failing them and was distant.

White said the organisation had been turned around during his time in office: “We have gone from being almost irrelevant to being the trusted voice of the frontline and the service. I think we had an organisation that shouted and bawled about everything, which became irrelevant to members and risked being wound up.”

White beat the Met officer Will Riches to the chairmanship via a coin toss, after the two candidates won the same number of votes. White, who had served as a firearms officer in Avon and Somerset, came into office promising to end a culture of drinking by federation officials using members’ money.

White said more reform of policing was needed: “There should be future radical reform of the police. The 43 forces need to operate more as a single entity. We have to break down the political barriers caused by PCCs [police and crime commissioners].”

White has written a paper advocating a national body to drive through reforms and impose them on forces if necessary: “We need a new governance board at a national level to drive reforms to policing and make sure it happens.”

The National Police Chiefs’ Council’s lead for ethics and integrity, the chief constable Martin Jelley, said: “While we recognise that there has been concern in the past around serving officers also being Freemasons, it is clear that concern over real or perceived threat to impartiality of this has decreased. Regular external scrutiny of the police service by Her Majesty’s Inspectorate of Constabulary and Fire & Rescue Services has not raised this as an issue of concern.ˮ

“Strict guidelines require officers to declare anything which might be deemed a conflict of interest in their force’s register of interests. If convincing evidence ever came to light which clearly showed that Freemasonry was adversely affecting the integrity of the police service then we would take appropriate action.”

Ten ways to embrace your goddess self