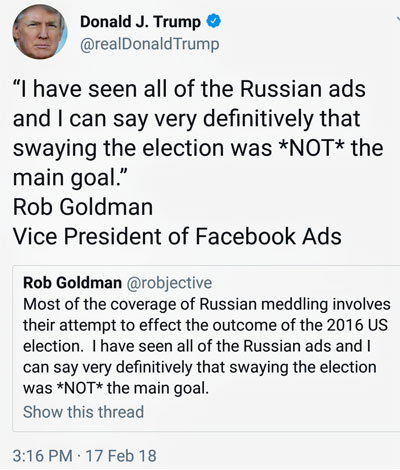 Even though Facebook has caved in to pressure from US lawmakers to crack down on ‘Russian interference,’ promising more safeguards against it, its vice president for advertising says Russians never tried to sway the 2016 election.

This spring, thirteen Russian nationals and three entities have been indicted by a US federal grand jury for supposed meddling in the presidential election. The allegations included “supporting the presidential campaign of then-candidate Donald J. Trump… and disparaging Hillary Clinton,” including through Facebook. The Facebook vice president for advertising, Rob Goldman, said the accusers and their massive mainstream media supporters got it wrong.

“Most of the coverage of Russian meddling involves their attempt to effect the outcome of the 2016 US election. I have seen all of the Russian ads and I can say very definitively that swaying the election was not the main goal,” Goldman tweeted on 17 February, 2018.

He then reiterated a fact that has been out there for a while: “The majority of the Russian ad spend happened after the election. We shared that fact, but very few outlets have covered it because it doesn’t align with the main media narrative of Tump [sic] and the election.” What he didn’t mention was that the advertising allegedly bought by Russians linked to the Internet Research Agency, which Western mainstream media calls a Kremlin-linked “troll farm,” cost around $100,000 – a trifling amount compared to the tens of millions spent by the actual Trump and Clinton campaigns.

Faithful to the rest of the ‘Russian meddling’ narrative, Goldman went on to accuse Russia of a “propaganda and misinformation effort” that aims “to divide America by using our institutions, like free speech and social media, against us.” And, according to him, “It is working incredibly well.”

The Russians, Goldman believes, are the reason Americans are “quite divided as a nation.”

“The main goal of the Russian propaganda and misinformation effort is to divide America by using our institutions, like free speech and social media, against us. It has stoked fear and hatred amongst Americans. It is working incredibly well. We are quite divided as a nation.ˮ Rob Goldman, February 17, 2018.

Commenters rushed to prove Goldman right in that last bit, at least. Furiously bashing him for contradicting even one part of the FBI allegations, they accused him of covering up his own failure to prevent the “meddling” from his position, enabling an “attack on America by a foreign power” and “bowing down” to Trump.