GALT: The Best Kept Secret in the World That Could Free Humanity with Unlimited Free Energy (1)

Steven Aftergood wrote, on November 3, 2018 an article titled Invention Secrecy Hits Recent High, where he wrote: “Whenever disclosure of a new invention is deemed to be ‘detrimental to national security’, a secrecy order may be imposed on the patent application, preventing its public disclosure and blocking issuance of the patent. 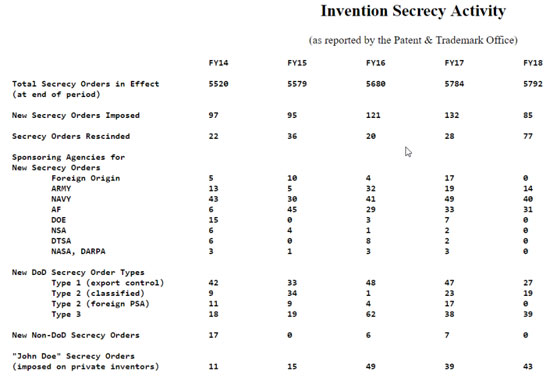 “By the end of fiscal year 2018 (September 30, 2018), shadowy government officials, just over the last seven to eight decades, have issued 5,792 secrecy orders. Just in the last year, since 2017, the American public has been again denied the knowledge and possible benefits of an additional 77 patentable advancements, most of which the American taxpayers funded.”

Part I: Was GALT Department of Energy’s First ‘Detrimental to National Security’ Target?

Globalists have feared American innovation for centuries. Globalist wanted serfs… not educated, innovative peers who might one day have the intellect to recognize they were being preyed upon by economic parasites. Rather than forge for food and shelter and a meager existence on earth, 20th century humanity dreamed of reaching up to the heavens. To accomplish this, mankind requires advanced energy technologies.

From the table above, the suppression of GALT (Geothermal Atmospheric Liquefied Thorium) chemical reactors, was of paramount importance. Unfortunately, the Globalists recognized this was but another threat to the status quo of their secret dominion over humanity as a whole. GALT would not be permitted to go to commercialization until the day Globalists could directly benefit from it.

GALT arose out of WWII’s Manhattan Project in the mid-1940s along with Congress’s Joint Committee on Atomic Energy (JCAE) and the President’s Atomic Energy Commission (AEC). Between the 1950s and 1960s, the knowledge of GALT was held back from the American public. It was deemed such a breakthrough in energy development, it would remain temporarily a national security secret to keep the Soviet Union from benefiting from it. In the early 1960s, with the inventor of GALT as President Kennedy’s scientific advisor, thorium and space exploration were being championed as America’s promising future. This all changed with the assassination of President Kennedy on November 22, 1963.

It took another decade for the Globalists to finally secure enough clout, in both Congress and the Presidency, to order the demolition of JCAE, the AEC and the final solution to GALT. Similar to Nikola Tesla’s wireless electricity, from the early 1900s, GALT would be secretly entombed. All evidence of its existence erased from history. By bait and switch treasonous congressional legislation, thorium fuels were prohibited from further consideration. The American public had been hoodwinked again.

Foreign Globalists would only permit the inferior nuclear fuels under dangerous pressurized light water reactors (PLWR) to compete against their fossil fuel monopolies.
Why?
Without access to the GALT technology, the Globalists knew the nuclear industry would eventually self-implode and no longer be a threat to their petroleum monopoly. Nuclear power would be hated and vilified upon the first accident and world’s addiction to oil would resume for at least another century.
Thanks to the Freedom of Information Act (FOIA), in the 1982 Daniel Ford published the book titled The Cult of the Atom. The book documented the arrogance of the government officials who refused to acknowledge the dangerous flaws of PLWR.

The minions of the Globalists not only refused to listen to the warnings of the nuclear design engineers, they threatened to prosecute and imprison anyone attempting to leak their fears to the American public. The nuclear accidents at Three Mile Island, Chernobyl and Fukushima assured the world’s continued energy addiction to oil. Interestingly enough, GALT was so well hidden from Daniel Ford, the author never even came across the term Thorium to reference it in his book.

Thus, one of the greatest energy innovations of the 20th century would be buried behind a time vault. GALT would be re-discovered, twenty-five years later, padlocked behind a metal door, within a former secret government Manhattan Project laboratory overseen by Department of Energy (DOE) since 1975.
Now in 2018, eighteen years after the re-discovery of GALT, by NASA physicist Kirk Sorenson, we are finally putting the puzzle pieces together. Like a suspenseful mystery novel, we have bribery, sex, blackmail, and betrayal of the US nation. We have even the murder and expulsion of powerful government officials including 20th century Presidents.

Through the centuries, Globalists use their vast wealth to erase their crimes against humanity from antiquity. This is why Globalists use their looted wealth to control the corporate media, the vast publishing industry, and what historians put to paper. This is why President Abraham Lincoln, from the 19th century remarked, “History is not history… until it’s the truth.”

Nikola Tesla, Dr. Jose Rizal and Charles Chiniquy were mighty foes of the Globalists in the 19th century. Bribed historians and publishing firms have been trying to write them out of American and world history ever since.

Fortunately, under President Trump and due to alternative media websites, the American public is waking up to this deception. The American public must continue to explore alternative information resources including long neglected books published prior to the 1960s if they want a more accurate understanding of American and world history concerning wars against the Globalists. 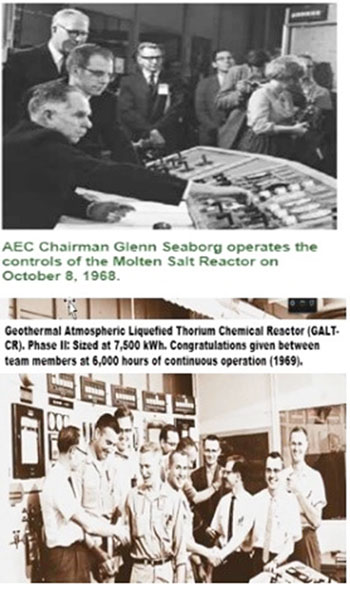 The images above are from classified photographs taken at Oak Ridge National Laboratories back in the late 1960s. A GALT chemical reactor had successfully broken the 6,000 continuous hour of operation test. GALT was ready to be commercialized by the early 1970s. Like Tesla technologies, a century earlier, GALT would have ended the world’s addiction to oil and set humanity on a new path of growth and exploration.

Foreign state Globalists realized the only way to successfully eliminate any future threat involving thorium was by stealthily expanding their active war against the American people and the Constitution. In 1963 and 1974 Globalists removed two U.S. Presidents for challenging their authority. Since WWII, Globalists have dictated their minions to expend $25 trillion of America’s resources on wars around the world while transitioning government treasuries from a gold-based currency to a worthless fiat system.

Had GALT chemical reactors gone to commercialization in the early 1970s, humanity would have had unlimited, inexpensive, clean and safe energy for the balance of mankind’s stay on this planet.

To the detriment of civilization, the Globalists, who stealthily controlled Congress through lobbying dollars, deemed GALT a national security threat: “GALT must be suppressed”. The nuclear industry had to be imploded with inferior and more expensive processes.
Why?
To permit the world’s addiction to the Globalists’ oil monopolies to continue. All this was finalized in a blink of an eye. Unbeknownst to the public, we had been pummeled back to the petroleum age… all under the pretense of national security!

In 1973, Globalists ordered the firing of GALT’s inventor and the disbanding of hundreds of engineers under him. Globalists would indirectly oversee the dismantlement of the national government laboratory the GALT director had famously led for decades.
To cover up this treason, in 1974, these same foreign Globalists had to proceed with the abolishment of two U.S. government agencies created originally in 1946. These were the Joint Committee on Atomic Energy (JCAE) and the Executive Atomic Energy Committee (AEC). The Globalist also had its minions pass 1974 legislation to prohibit any further GALT research. The Congressional minions who directed all this mayhem and sabotage to America’s future greatness were then ordered to resign from Congress by December 31, 1974.

A “sanitized” DOE arose in early 1975 to cover up the successful sabotage of American energy innovation. More detail is provided in the alternative media article titled: Thorium energy technology can free the world from nuclear poisons today. Why hadn’t America learned of the perfect crime committed against the country until now? It is because the corporate controlled media has been the propaganda tool of the Globalists for centuries. The media’s role is for distraction as oppose to illumination.

GALT is but one of among over five thousand tragic stories. As you may be aware, the alternative media has also published articles concerning GEET (Green Energy and Environmental Technologies) and other energy technology threats to the oil cartels owned by the Globalists. The Globalists will only permit non-competitive technologies, such as wind and solar, which must be subsidized by the tax payer. If the “John Doe” inventor of GEET had not purposely lied and grossly “under-estimated” his invention’s energy efficiency, back in the 1980s, it too would have been another victim of the Secrecy Orders.

As it was, the inventor was imprisoned and tortured, and eventually died before his time, due to his refusal to sell away his patent back to the Globalists. To learn the full details of GEET and other inventor attacks, read this article.

Summary: Based on the GALT history alone, one could rewrite the secrecy order to be defined as followings: “Whenever disclosure of a new invention is deemed to be detrimental to Globalist corporate monopolies and Deep State agendas, a secrecy order will be imposed on the patent application, preventing its public disclosure and blocking issuance of the patent until such time the inventor has been either bought off, blackmailed, imprisoned or suicided. Globalists will thereafter be permitted to continue the exploitation of their present monopoly until such time the monopoly’s value has been fully depleted. Thereafter, forty to fifty-years hence, Globalists will anoint one of their direct descendants as the inventor of the next monopoly they had previously suppressed from the past as their next wealth generator.”