Completely unnatural square cloud formations appeared off of the North American West Coast, in 2016 and continue to be seen in 2017. All available data confirms that the last decade of record shattering drought in California was a direct result of covert global climate intervention programs. Now that the drought has been reduced or eliminated throughout much of the state, does this mean climate manipulation programs have been scaled back or halted? Not at all.

The geoengineers control the flow of precipitation that must be constantly kept in mind. A primary goal of “solar radiation management” (SRM) programs is to create, expand, enhance, and chemically cool (via chemical ice nucleation processes) cloud cover over the surface of the planet. Though the weather-makers have allowed and augmented the flow of Pacific moisture into the Western US in 2017 (which has resulted in much more overall precipitation), the aerosol spraying assault and massive microwave manipulation of atmospheric moisture has continued to accelerate. 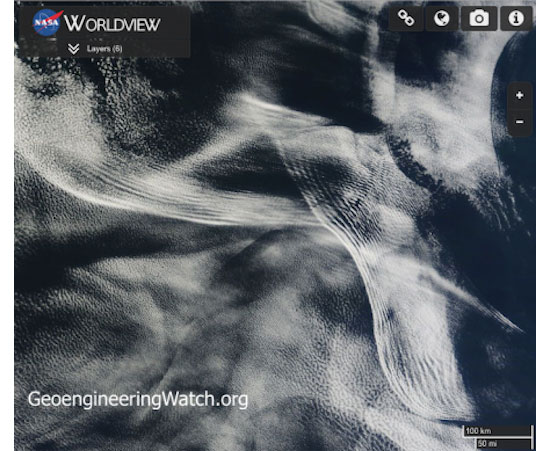 Significant zonal flows of moisture from the Pacific have in the months of spring been directed toward Northern California and the Northwest, which contributed to significant precipitation totals. But much of the moisture in these weather systems was in fact migrated over the West Coast in a desperate attempt by the geoengineers to cool inland regions of the US via atmospheric aerosol saturation and radio frequency/microwave transmissions (used to expand and disperse aerosolized cloud canopy). Short term toxic climate intervention cool-downs come at the cost of a worsened overall planetary warming. Climate engineering programs are not mitigation for Earth’s imploding life support systems, rather, the ongoing weather warfare is further fueling the destruction of these systems. 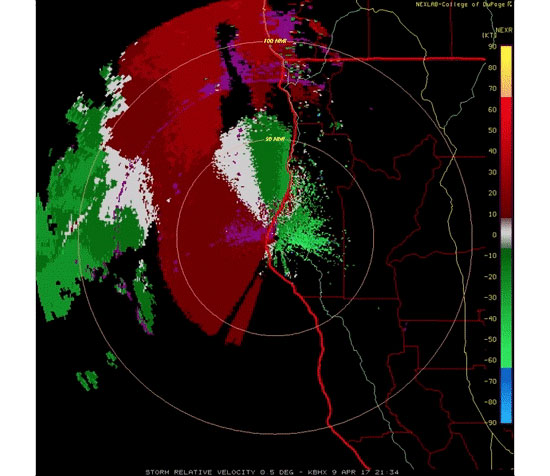 The transmissions from the “Lost Coast” region of Northern California (southwest of Eureka) have become almost constant as the weather makers attempt to broadcast incoming rivers of moisture into the widest possible expanse. Transmission sites are located all over the US and all over the world. There are also SBX transmission facilities (sea based X-band radar which is also used for climate manipulation). New facilities are constantly being erected in a desperate attempt by the power structure to expand their weather modifying global radio frequency/microwave grid.

Not only are these extremely powerful transmissions completely disrupting weather and climate patterns, all life forms within the rapidly expanding broadcast zones are being exposed to these verifiably dangerous and damaging signals. What visible effect can the RF transmissions have on cloud system formations? The NASA satellite image below is an example. 90 degree angles with straight sides do not exist naturally in nature, such phenomenon are the result of massive geoengineering operations. 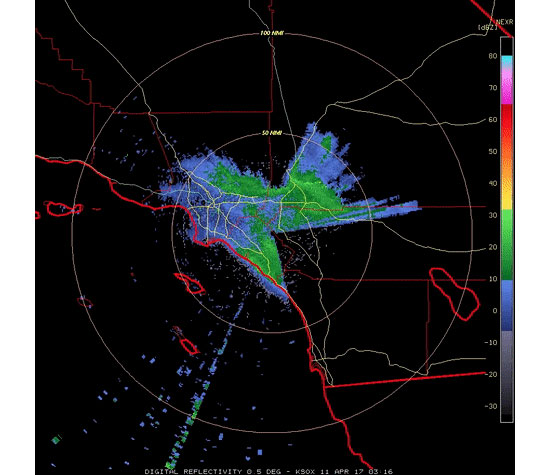 Yet another shocking example of radio frequency/microwave transmission effects is shown in the image below (also taken off the West Coast of North America).

The combination satellite/radar image shown below clearly reveals the climate engineering scenarios described in this article. The brighter the cloud cover is, the more aerosolized it is. “Cloud albedo enhancement” (CAE) is a component of climate engineering/SRM. Though official sources would have us believe that CAE processes are only a “proposal” for marine cloud formations that would be created with ship emissions, the ongoing jet aircraft aerosol dispersions in our skies are undeniable. The overall result of solar radiation management is vast areas of largely rainless cloud cover that blots out our once blue skies. 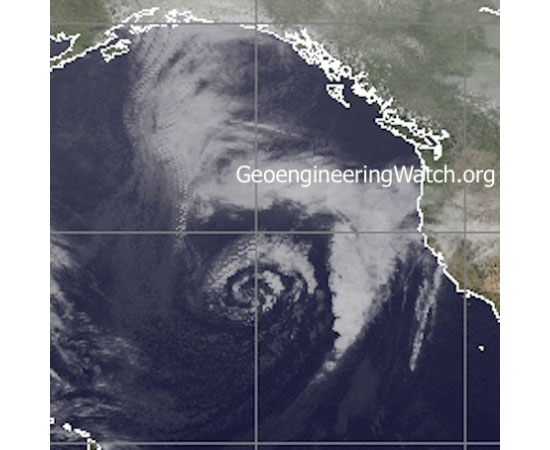 The creation of a “global dimming” scenario is a primary objective of geoengineering/SRM/CAE programs. Though overall atmospheric relative humidity has been declining as a result of climate engineering and global dimming (creating protracted drought in countless regions around the globe), catastrophic deluges and flooding are also increasing. The global climate engineering assault has completely derailed and disrupted the planetary hydrological cycle creating countless weather whiplash scenarios. The on-going global climate engineering insanity must be fully exposed and halted, this is the great imperative. All of us need to make our voices heard in this most critical battle.