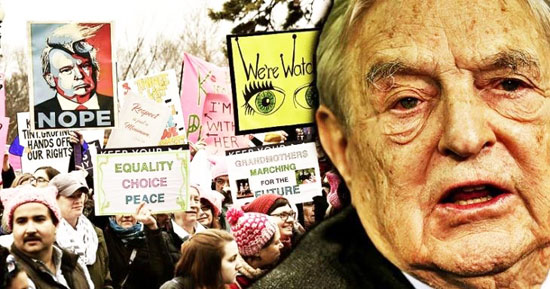 An investigation by a New York Times affiliate has revealed that billionaire globalist financier, George Soros, who recently called Donald Trump a “would-be dictator” during an interview at Davos, and whose Open Society Foundation works to finance and forward progressive causes across the world, and is intimately connected to numerous color revolutions, the Arab Spring, and various other political uprisings across the globe, has been revealed to be connected to more than 50 of the groups that organized the nationwide Women’s Marches that saw millions of Americans take to the streets across the country.

The march’s official website says: “We stand together, recognizing that defending the most marginalized among us is defending all of us.” Many people turned out to be a manifestation of that ideal, but it’s important to understand the reality of what is happening on a strategic political level as an inorganic politically contrived and funded event. This, in no way, takes away from the validity of standing up for women’s issues but is important to note that women are being used as pawns in a larger ideological political game that has international overtones of power politics.

These marches were largely billed as “spontaneous” and “grassroots” actions, by publications like The Guardian and Vox. However, the reality exposed by an investigation by self-described liberal feminist, Asra Q. Nomani, writing for New York Times affiliate Women in the World, revealed that after studying the “funding, politics and talking points of the some 403 groups that are ‘partners’ of the march,” contrary to the non-partisan rhetoric used in these marches, they were not really “women’s march” but were rather “for women who are anti-Trump”.

Nomani reveals that the Women’s Marches were actually organized as political tools to be used to strategically forward a progressive political agenda against President Donald Trump – exposing the protests to largely be an organized, top-down driven political operation – and not an organic movement of concerned Americans taking to the streets as reported by the mainstream media.

According to Nomani’s Women in the World/New York Times report: “Following the money, I poured through documents of billionaire George Soros and his Open Society philanthropy, because I wondered: What is the link between one of Hillary Clinton’s largest donors and the ‘Women’s March’?

I found out: plenty.

By my draft research, which I’m opening up for crowd-sourcing on GoogleDocs, Soros has funded, or has close relationships with, at least 56 of the march’s partners, including ‘key partners’ Planned Parenthood, which opposes Trump’s anti-abortion policy, and the National Resource Defense Council, which opposes Trump’s environmental policies. The other Soros ties with ‘Women’s March’ organizations include the partisan MoveOn.org (which was fiercely pro-Clinton), the National Action Network (which has a former executive director lauded by Obama senior advisor Valerie Jarrett as ‘a leader of tomorrow’ as a march co-chair and another official as ‘the head of logistics’). Other Soros grantees who are ‘partners’ in the march are the American Civil Liberties Union, Center for Constitutional Rights, Amnesty International and Human Rights Watch. March organizers and the organizations identified here haven’t yet returned queries for comment…”

Much like post-election protests, which included a sign, “Kill Trump”, were not “spontaneous”, as reported by some media outlets, the “Women’s March” is an extension of strategic identity politics that has so fractured America today, from campuses to communities. On the left or the right, it’s wrong. With the march, women have been appropriated for clearly anti-Trump days.

The way Soros operates is as an “ideological philanthropist”, whose Open Society Foundation provides funding for organizations whose interests align with his own, and which blurs the line between political advocacy and social justice – thus being able to leverage selected/funded social justice organizations to affect political discourse.

This method is confirmed in a memo released by WikiLeaks, which was sent to Soros by Clinton campaign chairman John Podesta. The Clinton campaign reveals the political motives behind using grassroots organizations to “control political discourse”. Podesta wrote to Soros that he wanted to “better utilize these networks to drive the content of politics through a strong echo chamber”:

“Control the political discourse. So much effort over the past few years has been focused on better coordinating, strengthening, and developing progressive institutions and leaders. Now that this enhanced infrastructure is in place – grassroots organizing; multi-issue advocacy groups; think tanks; youth outreach; faith communities; micro-targeting outfits; the net roots and blogosphere – we need to better utilize these networks to drive the content of politics through a strong ‘echo chamber’ and message delivery system.” 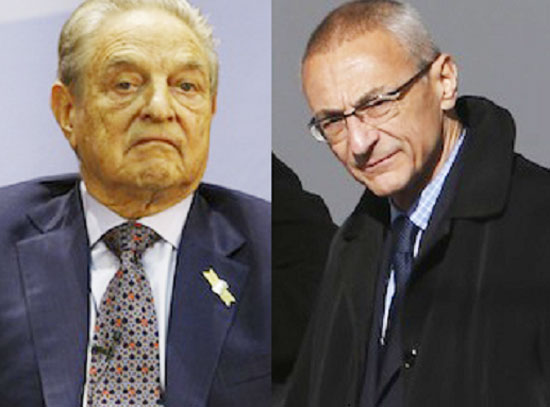 Anyone familiar with the history of the Soros Open Society Foundations in Eastern Europe and around the world since the late 1980s, will know that his supposedly philanthropic “democracy-building” projects in Poland, Russia, or Ukraine in the 1990s allowed Soros the businessman to literally plunder the former communist countries’ wealth, according to the New Eastern Outlook.

A report in New Eastern Outlook revealed exactly how Sores-affiliated organizations across the world operate:
“The totality of what is revealed in the three hacked documents show that Soros is effectively the puppet-master pulling most of the strings in Kiev. Soros Foundation’s Ukraine branch, International Renaissance Foundation (IRF) has been involved in Ukraine since 1989. His IRF doled out more than $100 million to Ukrainian NGOs two years before the fall of the Soviet Union, creating the preconditions for Ukraine’s independence from Russia in 1991. Soros also admitted to financing the 2013-2014 Maidan Square protests that brought the current government into power.

Soros’ foundations were also deeply involved in the 2004 Orange Revolution that brought the corrupt but pro-NATO Viktor Yushchenko into power with his American wife who had been in the US State Department. In 2004 just weeks after Soros’ International Renaissance Foundation had succeeded in getting Viktor Yushchenko as President of Ukraine, Michael McFaul wrote an editorial for the Washington Post. McFaul, a specialist in organizing color revolutions, who later became US Ambassador to Russia, revealed: ‘Did Americans meddle in the internal affairs of Ukraine? Yes. The American agents of influence would prefer different language to describe their activities – democratic assistance, democracy promotion, civil society support, etc. – but their work, however labeled, seeks to influence political change in Ukraine’.”

Additionally, during the 2016 presidential cycle, Soros committed $25 million dollars to the 2016 campaign of Hillary Clinton. According to the standard Clinton operating procedure, this was indicative of the symbiotic relationship of favors between the billionaire and his array of political puppets across the globe.
Soros has often been accused of using his wealth to attempt to socially engineer the national domestic politics of entire states. He was accused of being connected to organizations that organized and funded the nationwide protests after the election of Donald Trump – a claim that Soros denies.

“There have been many false reports about George Soros and the Open Society Foundations funding protests in the wake of the U.S. presidential elections. There is no truth to these reports,” said a spokeswoman from Soros’s Open Society Foundations in a statement, adding: “We support a wide range of organizations – including those that support women and minorities who have historically been denied equal rights. Many of whom are concerned about what policy changes, may lie ahead. We are proud of their work. We of course support the right of all Americans to peaceably assemble and petition their government – a vital and constitutionally safeguarded, pillar of a functioning democracy.”

Make no mistake that the events you’re seeing transpire nationwide in U.S. are largely being coordinated by a billionaire political elite class that is looking to strategically forward a political agenda. Soros has used the same formula to foment domestic unrest to affect political goals in numerous nations – and it certainly looks as if he now has the United States in his sights. It’s clear that Saul Alinsky’s Rules for Radicals is being employed by the left in an effort to destabilize and undermine political discourse in the U.S.

Women’s rights are unquestionably human rights issues, not a political issue, which makes it disappointing that we, as free individuals, don’t organically create manifestations like these large-scale marches, without oligarchs and their vested political interests essentially making it happen as a means of forwarding their particular ideologically driven political agenda.