Google partners with China to dominate the world with online tyranny, censorship and communism agendas

Just when you thought Google couldn’t possibly get any scarier, The Intercept is reporting that the company is still working in secret on the controversial Chinese search app it claimed to have abandoned last year. 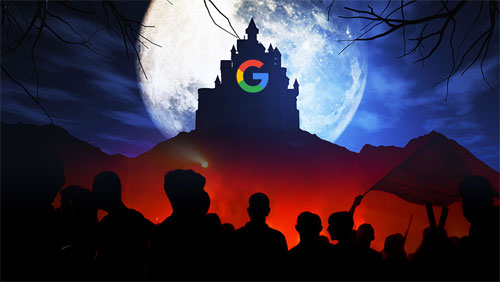 The search app, which has the code name “Project Dragonfly,” is still very much alive, even though the company claimed last December that it was not planning to launch it after all in the wake of widespread condemnation.

The search platform is designed to blacklist information the Chinese government doesn’t want its people to see about topics like democracy, human rights, peaceful protests, and religion. It will also link the searches people carry out to their phone numbers so the government can keep tabs on them. Some of the terms that would be blocked include “human rights”, “Nobel prize” and “student protest.”

Right now, Google’s search service can’t be used by most Chinese internet users because the communist country’s “Great Firewall” has blocked it. The new app will adhere to the strict Chinese censorship laws; the government blocks its people from reading information online about news, academic studies, political opponents and sex, among other topics. Many popular Western news and social media sites are also censored, such as the Wall Street Journal, the BBC, the New York Times, Wikipedia, Facebook, Twitter and Instagram.

The effort attracted condemnation around the world from human rights organizations and members of Congress when it was first exposed by The Intercept, and outraged employees who wanted nothing to do with the project voiced their moral and ethical concerns to their employer, with some quitting over it. Those who worked on it were told by Google management to keep quiet about it, cover up paper trails, and deflect questions about it. Google then announced that they would no longer be working on the project and moving team members to new projects.

Work on project continues in secret

However, sources from inside Google have told The Intercept that execs are currently conducting a secret internal assessment of the platform. Although the company carries out performance reviews each year, they’re generally carried out in an open way and subject to peer review. That’s not the case with Dragonfly, with executives taking the “unusual” approach of setting up closed review committees made up of senior managers to assess work on the project.

Amnesty International’s Patrick Poon pointed out the implications of the search engine for all of us when it comes to internet freedom and freedom of information. He said: “The biggest search engine in the world obeying the censorship in China is a victory for the Chinese government – it sends a signal that nobody will bother to challenge the censorship anymore.”

Of course, Google must also be eager to gain access to China’s gigantic internet user base, which numbers 750 million and equals the population of Europe. The data they could collect – and money they could potentially earn – is apparently too good for them to pass up.

This leaves us with a lot of questions. Why is evil Google still working on this project, and why are they so desperate to keep people from finding out about it?

Why are they partnering with a communist country known for its censorship and tyranny, and what elements of this privacy-violating search engine will be incorporated into the searches that millions of Americans and people around the world use every day?

What other entities will use the technology to prevent people from seeking information?

Will the rest of the world one day be blocked from searching on terms like “vaccine dangers” and have their identities revealed to authorities for daring to look it up? We’re afraid that we might be getting the answers to these questions very soon.