This article will focus on the question of how 5G and smart meter technology could be used as a silent weapon against people who don’t conform to the plans of the government.
The public position will be that these technologies, if developed into weapons, will be used against terrorists and those who pose a threat to national security. 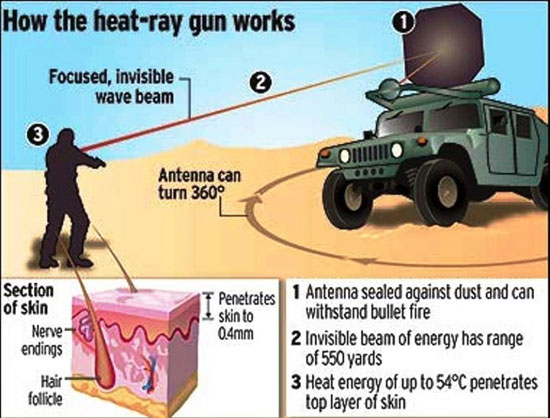 However, because these are “stealth” technologies where the person being targeted would not even know they were being targeted, they could potentially also be used against people who object to mandatory vaccination, medical kidnapping, the nationalization of our private health data, the use of toxic chemicals in food, mandatory indoctrination of children in the public education system, mainstream media brainwashing, the collection of information about our religious and political beliefs, the denial of the right to assemble in peaceful protests against the overreaching power of national and state government, to name just a few. 5G and smart meters could also be used as tools for invading our privacy.

Could 5G cell towers and smart meters be used as non-lethal or even lethal weapons?
In the following short video, you will see how the U.S. Military uses its microwave based Active Denial System (ADS) as a non-lethal weapon. The video explains that a tightly focused and invisible beam of 95 GHz microwaves can be projected a long distance – farther than the reach of standard military rifles. This beam of millimeter radiation travels at the speed of light and is able to penetrate human skin about 1/64 of an inch.
This microwave radiation heats the water molecules in the skin and triggers pain nerves located on the surface of the skin. This intense heating causes people to immediately jump away from the beam and go wherever the system operator pushes them.

This non-lethal microwave weapon was designed for crowd control. It can move a crowd of civilians out of the way of military activity or disperse civilians who are watching military activity.
It can also target individual enemy agents in urban warfare or battlefield conditions. It can penetrate automobile window glass and subdue the driver with intense heat and pain, thus causing the vehicle to stop.
A recent article in the Washington Times reported that the Russian military is equipping aircraft with microwave weapons. Some of these weapons are so dangerous to the lives of human pilots that they must be placed on unmanned aircraft and controlled from a distance.

The previous information about the military’s Active Denial System confirms that microwaves can be directed toward a specific target.
We also know that the 5G wireless technology system that telecom companies want to install across the world has the ability to steer microwave beams toward objects. In fact, this is one of the key features of the 5G system.
This allows each 5G cell tower to direct multiple beams of millimeter microwaves to a cell phone, an iPad, tablet PC, automobile, or any other device that will provide a GPS location.

If you are using a cell phone as you drive, the nearest 5G tower will lock a beam on you and your phone as you travel. It targets your phone and tracks your every movement. It makes frequent adjustments in the trajectory of the microwave beam to keep you connected. If your car has built-in GPS, then your car can be tracked in the same way.

5G cell systems use phased array antennas and electronically variable phase shifters, to simultaneously project a large number of microwave beams toward multiple users across a band of frequencies.
Antenna arrays consist of hundreds and sometimes many thousands of individual antennas, which are clustered together in a specific pattern to create many steerable beams of microwaves.

These fixed antenna arrays are also called adaptive or smart antenna arrays, because the microwave beams they produce are electronically steered by computers.
Simply initiating a cell phone call or making an internet connection triggers an automatic response from the antenna array on the 5G cell tower to adjust its output and to direct a microwave signal toward your device. Even when your phone is in standby mode, it will periodically make contact with the cellular system, during which it provides its location.

Fixed array antenna systems are also used by the military for its newest generation radar systems. These antenna arrays scan the sky and track satellites. The electromagnetic frequencies they use are much lower than 5G, which means their beams can travel great distances.
Fixed array antenna radar systems can also be used at close range to see through walls into buildings.

Fixed antenna arrays consist of small antennas arranged in one of several configurations such as a grid, a circle, or a line. If you want to see a demonstration of fixed array antennas, please watch the following video. This video is a radar application, but the concepts are exactly the same for 5G microwave beam steering.

For a highly technical presentation on beam steering and 5G antenna systems, please watch these videos.