How a Misinformed Tweet Was Manufactured into Major Right-Wing News


A BuzzFeed News analysis found that the top 20 fake political news stories in circulation during the election got more clicks, views, shares and reactions on Facebook than the top 20 real news stories. The vast majority of those fake stories – all but three – were “overtly pro-Donald Trump or anti-Hillary Clinton” meaning they pinged around the conservative webosphere, where they were accepted without question by millions and then passed to the next gullible consumer.

Paul Horner, among the most prolific and successful fake news writers, told the Washington Post that Trump voters and other “right-wing Republicans” were almost single-handedly responsible for the $10,000 he pulls in every month, because they “post everything, believe anything” and continue to share fake news even when they find out it isnʼt true. That might explain why so many fake news stories seem specially tailored for the conservative news reader.

One of Hornerʼs most popular stories was a fabricated interview with a made-up person who said heʼd been paid to protest Trump ahead of the election. During the campaign, multiple members of Trumpʼs team retweeted the story, even though many sources pointed out it wasnʼt true. The ludicrous idea that anti-Trump demonstrators are each paid thousands of dollars by billionaire George Soros – who plays a starring role in pretty much every right-wing conspiracy – has now become conservative gospel.

Eric Tucker, a marketer in Austin, Texas, was probably very familiar with this rumor when he recently sent an erroneous tweet that launched a viral right-wing story. The New York Times decided to examine how Tuckerʼs tweet became a major topic of conservative discussion, following its online travels step by step. On the evening of November 9, just as protests against President-elect Trump were erupting all over the country, Tucker tweeted the photo and message below to his tiny group of 40 followers. 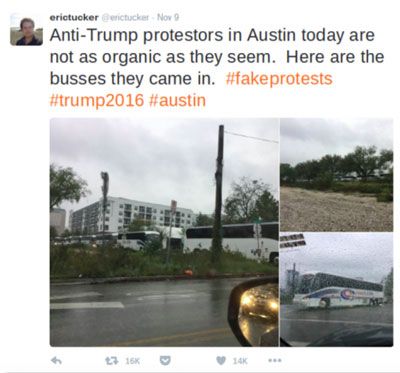 According to TheTimes, Tucker heard about anti-Trump demonstrations in Austin hours after he saw the buses in the photo, and for reasons that arenʼt entirely clear (except that if you look for boogeymen everywhere you will find them), assumed a connection between the two. The Times confirmed that Tuckerʼs photo actually features buses booked for employees of Tableau Software, which was having a conference in the city. (Tucker told the Times he did a search for nearby conferences but didnʼt find anything.) Roughly four hours after the original tweet went out, it ended up on Reddit. “BREAKING: They found the buses!” the header reads. “Dozens lined up just blocks away from the Austin protests”. The thread of comments that follow indicate subreddits full of Trump supporters who, riding high on an election victory, are ecstatic to have a new conspiracy they can hang on the left.

“Alex Jones is based in Austin” one commenter declares. “Let him know, and his crew can check it out.”

Thatʼs followed by a lot of wishing the worst on Soros, complaints about “cucks” suggestions that James OʼKeefe get involved, and a lot of assumptions rooted in racism and paranoia. “Busing in violent mobs? Please tell me how this isnʼt inciting treason” one person demands. This inexplicably devolves into a conversation about Obamaphones.

By the morning of November 10, the story appeared on right-wing message board Free Republic, where a user linked back to the original tweet. Hereʼs the point at which things quickly build momentum, picking up the pace across right-wing echo chambers. According to the Times, that same day, “Facebook pages like Robertson Family Values, which is named for but not affiliated with the stars of ‘Duck Dynasty,ʼ and Donald Trump Commander in Chief 2020, linked to the Free Republic discussion.” A Times screengrab of a Free Republican Facebook post repeating the Reddit message shows 307,616 shares. The paper also cites 5,000 shares of each of the aforementioned blog posts.

By now, the story had trickled upward to local news outlets. When the Austin-based affiliate for Fox called Coach USA North America bus company to get more information, they were told by spokesperson Sean Hughes that the company wasnʼt involved in any protests. Hughes even sent the station a statement clarifying that buses were in town “for a conference” and that “at no point were Coach USA buses involved in the Austin protests”. The television stationʼs website, now empty of most of the content that appeared there, still features photos of the buses taken by Tucker, with a caption that poses this leading question: “Were tens of thousands of protesters across the U.S. paid to walk the streets, hold signs, and chant anti-Trump sayings?”

That evening, Gateway Pundit, a major conservative blog, posted a story with the headline, Figures. Anti-Trump Protesters Were Bussed in to Austin Fake Protests. They used Tuckerʼs original pictures, and according to the Times, linked the nonexistent busloads of fake protesters to “Soros money”. Three hours later, President-elect Trump or someone on his team took to social media to tweet about the fake story to his 16 million followers.

“Just had a very open and successful presidential election” the message reads. “Now professional protesters, incited by the media, are protesting. Very unfair!”
As of this writing, the tweet has more than 71,000 retweets and 240,000 likes. 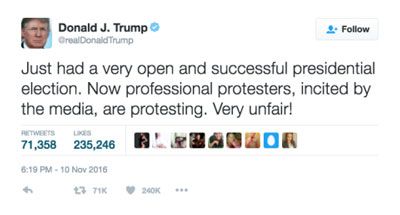 On November 11, a spokesperson for Tableau, the tech company that rented the buses for its conference attendees, sent a statement to the Austin American-Statesman. The newspaper, in turn, published an article debunking Tuckerʼs original tweet and all of the stories that followed. Included was an interview with Eric Tucker, who praised Alex Jones and stated “I think that it is necessary for us to risk sometimes being wrong to help develop moving the dialogue forward.”

Later in the day, according to the Times, Tucker sent a tweet that acknowledged the possibility his first suggestion may have been “flat wrong”. There was also a Snopes article declaring the rumor false. Instead of stopping the fake news dead in its tracks, the case essentially turned into proof that “a lie can travel halfway around the world while the truth is putting on its shoes” as the old saying goes. Also, the internet loves a lie that supports its political agenda. According to the Times, “Mr. Tuckerʼs initial tweet continued to generate thousands of shares on Facebook through Free Republic and pages like Right Wing News and Joe the Plumber.”

On the night of November 11, Tucker put up the tweet below, which shows his original message updated to carry a bright red “FALSE” across it. The corrected tweet has only few tens of retweets and likes.
He told the Times that moving forward “I can assure you Iʼm going to try my best to be balanced with the facts and be very clear about what is opinion and what is not.” He also said that knowing what he knows now, he “might have still tweeted it but very differently. I think it goes without saying I would have tried to make a more objective statement.” 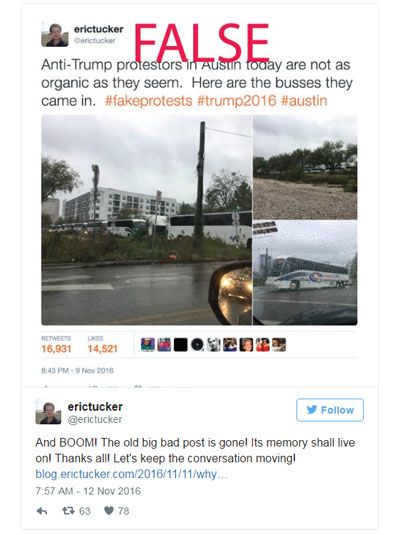 The same night, Tucker finally trashed the tweet that started it all. While thatʼs been scrubbed from social media, its impact isnʼt going anywhere. Neither, coincidentally, is President-elect Donald Trump.