Martial law was originally intended to be used when the United States was under attack during a war. The precept was to maintain control and a semblance of order, and also to make provisions for the necessity of troops fighting in the United States and the shifting of civic and government assets toward the conduct of the war and wartime industries. It is supposed to be utilized when the existence of the nation is in grave danger. Unfortunately, that is not what its purpose became under the Obama administration. Now it is the means to reach the end state: The Totalitarian State. 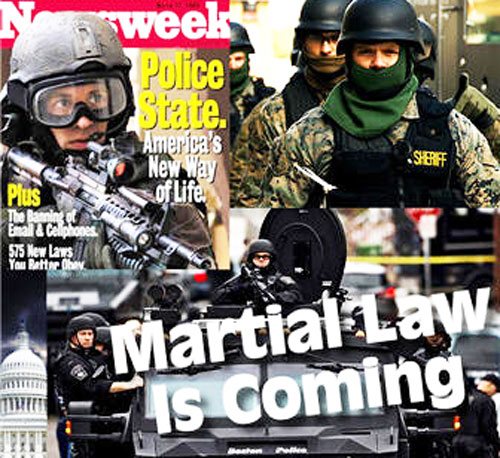 Prepare For Any Disaster

Obama and his administration, to include such notables as Jeh Johnson, who was the head of the Department of Homeland Security, have formulated the plans for COG (Continuity of Government) operations to take place immediately following the implementation of martial law. All of this has nothing to do with protecting the country, and it is completely nebulous and ambiguous, as the NDAA (National Defense Authorization Act) of 2014 effectively declared the entire United States and the world as a “battlefield in the war on terror”.

Such would ensure a “smoother” transition for the US president to declare the United States under attack even if not a single foreign soldier’s boot touches America’s shores. Let us place this into a concept in the context of what we have covered: When Martial Law is implemented, the Constitution will no longer have any effect, and the United States will then be under the rule of Totalitarian Law.

Let’s Look at the Facts

Let those words burn in, readers, as many are undoubtedly thinking “This’ll never happen in the U.S.” or “That’s just fear-mongering”.
No, it is happening in the United States, and it’s a warning based upon facts, not fear, arrived at from the actions of the Obama administration over the past 8 years.

It is a fact that Anwar al-Alawki, the American-born Muslim cleric was assassinated in Yemen by a drone strike without any attempt at extradition back to the United States and in violation of his rights under the Constitution. It is also a fact that Christopher Dormer, a former soldier and police officer was killed by a drone strike on U.S. soil instead of bringing him into custody under due process of law.

There is no more due process of law. The police shoot first. If the circumstances are nebulous, did you notice how the perpetrator always “commits suicide” or “he’s killed by police officers” and never makes it to the courtroom?

Another fact that is worse: the former U.S. president (Obama) whose Secretary of State at the time (Hillary Clinton) allowed… allowed, mind you… the Embassy of the United States of America in Libya… to be destroyed, and the American Ambassador and four of his staff to be tortured and killed. When asked what caused it all, Clinton responded with “What difference does it make?”. Look at Solyndra (President Obama defended his administration’s approval of a $535 million loan guarantee to Solyndra, a now-defunct solar company), look at Fast and Furious (a Department of Justice Bureau of Alcohol, Tobacco, Firearms and Explosives “gunrunning” operation in which the Obama administration allowed guns to be sold to Mexican drug cartels in the hope the weapons would be recovered at crime scenes), look at ICANN and the Internet giveaway, look at Obamacare, look at Clinton’s e-mail scandal, and look at all of the unconstitutional Executive Orders and actions.

Obama wanted to declare Martial Law; he was creating the conditions leading up to such a declaration such as (but not limited to) war, economic chaos, civil unrest, and intentionally weakening the military of the United States of America.

History Has Shown Us All Along What Will Happen Next

History shows us what to expect under Martial Law and the eventual Totalitarian State that it will usher in. Aleksandr Solzhenitsyn wrote The Gulag Archipelago. For a primer on totalitarianism and its inception and creation, look no further. Look to history, for it is not limited by cultural or linguistic boundaries: it is the history of mankind, and therefore it is our history… yours and mine.

“They took those who were too independent, too influential… too well-to-do, too intelligent, too noteworthy. They arrested officers everywhere. Thus the population was shaken up, forced into silence, and left without any possible leaders of resistance.” – Gulag Archipelago I, page 77

Call it Communism, call it Totalitarianism… it is all the same. As you may well realize, they will institute these measures by playing upon the fears and base needs of the population.

“The United States will eventually fly the Communist Red Flag… the American people will hoist it themselves.” – Nikita Khrushchev, 6/19/1962, Bucharest, Romania

The stage has already been set in the United States. The only thing that awaits is the right opportunity, the right moment. 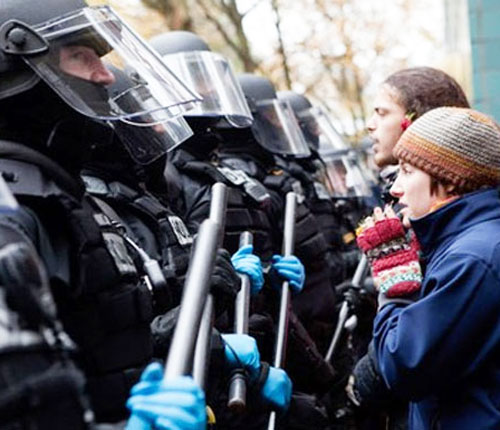 A little-known work exists that documents the truth behind a society’s demise from free and open to totalitarian… the “Fundamental Transformation” to paraphrase Barack Hussein Obama II’s campaign slogan. The work is entitled Vietnam Under Communism,1975-1982, by Nguyen Van Canh.

Here are a few excerpts:

“In rural areas, all cultivated land had been confiscated and made part of agricultural cooperatives. For dwelling purposes, each family was given a small lot on which to build a home and cultivate a small private garden… Ho Chi Minh, in early 1969, issued a decree saying that the lot allocated to each family was only on loan to it, since the real owner was the State.

State ownership, disguised by such phrases as «the people’s collective mastery of society» has been extended to virtually all forms of property. In the official view, this means that man no longer exploits man; in practice, it means that the State exploits everybody.” – Vietnam Under Communism, 1975-1982, pg. 23

Re-education camps sprung up all over Vietnam after the North took control of the South. The book painfully chronicles how any undesirables, such as intellectuals, former elected officials, schoolteachers, doctors – basically anyone the Communists chose – were sent to re-education camps. The internees were subjected to a barrage of communist dogma and forced to regurgitate it flawlessly on paper and in speech. Torture, medical deprivation, forced hunger, and summary execution were the tools employed in the camps. The Vietnamese also have concentration/forced labor camps that they claim to “exemplify the spirit of collectivism”.

Another work that bears mention is The Bridge at Andau, by James Michener, written in 1957. If you want to learn about the heroic resistance of the Hungarians to throw off the yoke of the USSR, this is the book to read. There is much to be learned from it, and here is an excerpt that shows how true rule under a totalitarian state is administered: “If there is a single shot from any house, destroy the whole house. If there are many shots from a street, shoot down every building in the street.” (Pg. 76)

Remember how Obama signed treaties in the years 2011-2013 with other nations that permitted foreign troops to be deployed on American soil? Yes, the US president has that right under treaty with a provision that the foreigners are asked to come in to help restore order if he cannot execute the laws of the United States as the Chief Executive Officer. There is great precedence here. King George III imported Hessian mercenaries into the Colonies to fight against the rebels.

In The Bridge at Andau, this was done by the Soviets, as cited here:
“…foot soldiers took over… troops patrolling Budapest were found to be Mongols from the Central Asian Republics. Why had they been brought in? Because the original troops from Russia proper had been garrisoned in Hungary… so long that they had become too human and could not be depended upon to shoot civilians.

From this it would appear that Russia has adopted a Draconian policy of never using troops in their own native countryside, but always moving into disaffected areas shock troops from remote parts of the empire, and knowing that troops from any given area cannot be trusted to massacre their own kin.” – The Bridge at Andau, pages 82-83

When Martial Law occurs, then will come the FEMA camps and detention centers. Then will come the “reeducation camps”, already suggested for the undesirables such as Constitutionalists, patriots, veterans, and government protestors.

The reeducation camps were actually “suggested” for the United States by none other than former Weather Underground convicted-then-pardoned terrorist William “Bill” Ayers… a man who bombed the Pentagon… and later became a mentor and sponsor to Barack Obama, the former U.S. president.

Travel will be restricted; communication will be suspended. The economy will collapse, and there will be arrests, detentions, and executions. The United States as we know it will either cease to exist or change in form.

Do not either be complacent or fall into a state of denial. These things are metastasizing before our very eyes. All that is needed is a spark to kindle the bonfire. Read Orwell’s 1984 to see what it can progress to if we lose in our struggle. The battle is already joined. Anyone who you can make aware of what is happening and what will soon happen is perhaps one less person to serve the State and the regime that is coming.

Read the history books. Regarding heinous things such as descent into totalitarianism, history does repeat itself, unless you use the positive lessons of what people have done to stop it and arrest it. War is coming, and it will be a war that is used as the trigger to inculcate martial law.