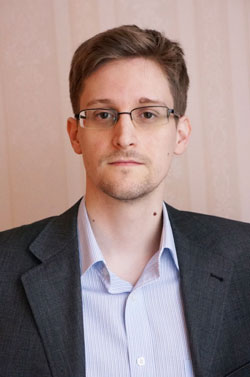 Whistleblower Edward Snowden warned a group of European reporters, on October 26, 2016, that in the era of mass surveillance, journalists are increasingly a threatened class.

In a live-streamed discussion on investigative journalism hosted by Germany’s Süddeutsche Zeitung, Snowden explored the threats to journalists posed by hostile governmental forces and a vast global surveillance network.

“Journalists are increasingly a threatened class when we think about the right to privacy” Snowden said. “Yes, I can give you tips on how to protect your communications, but you are going to be engaging in an arms race that you simply cannot win. You must fight this on the front pages and you must win, if you want to be able to report in the same way that you’ve been able to do in the previous centuries.”

Snowden went on to highlight the critical role journalists play in provoking crucial public debate about government policy, such as the United States’ spying activities:
“We have technologies that can protect communications in an unbreakable format when they’re in transit. Governments have reacted to this as if we’ve thrown them in a pool of acid, saying you know, ‘you’re shutting us out, you’re going dark’. This is false.

Any government official who claims we’re going dark is lying. We know this because we have classified documents from inside governments and we have reportage from journalists who have been in private sessions with these officials.

Things are pretty bad for our side. For the government’s side, it’s never been easier. How do we reconcile this with this idea that these are theoretically, as far as our understanding of mathematics goes, unbreakable communications? It’s because what we’re doing is we’re thwarting mass surveillance when we use encryption. We’re not stopping targeted surveillance. Because even, again, if you have the most well-encrypted device in the world, if the government spends a million dollars to pay a hacker to exploit your phone personally, they will very likely succeed.

In our current state of the art, offense is easier than defense. This is an unfortunate artifact of the fact that governments around the world have prioritized offensive capabilities for the benefit of spying on people so much more strongly than they have defensive capabilities, preventing our countries from being hacked. And this is what’s leading to the kind of dynamics we see today […] Whether it’s the Office of Personnel Management; whether it’s this recent Democratic National Committee hack; whether it’s all of these other things about infrastructural attacks; fear of the power grid being attacked – these were preventable problems.

We can hack Russia ten times; it will cause less damage to them than one hack to us will cause. We can hack North Korea 1,000 times, and they will suffer less damage than if they hacked us a single time. This is not a game that we want to get into, so why are we doing so? It’s because policy is short-sighted.”

“And policy is only short-sighted here because it is not being publicly debated” Snowden added. “It is not being openly scrutinized outside of this audience of a few special interests.”

Australia to Search Out and Prosecute Anti-Vax Nurses and Midwives; Calls For Public to Turn Them In