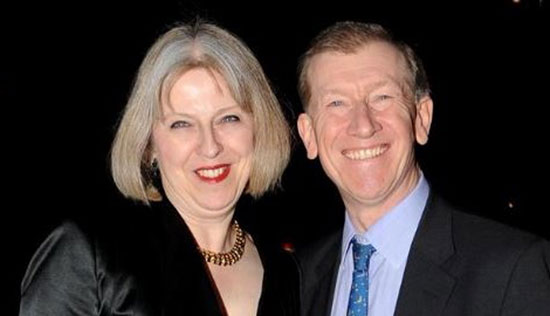 The husband of British prime minister Theresa May just happens to work for a company that is the largest shareholder in arms manufacturer, BAE Systems, whose share price just happened to soar since the recent airstrikes in Syria.

Philip May works as an investment relationship manager for the company Capital Group. Capital Group is also the second-largest shareholder in Lockheed Martin – a US military arms firm that supplies weapons systems, aircraft and logistical support. Its shares also just happened to rocket since the missile strikes against Syria last week.

RT reports: The fact has not gone unnoticed by some on Twitter, who agree that BAE Systems has done very well out of the UK-US-France allied airstrikes on Syria, which were sanctioned by Theresa May. It has been reported that the UK’s contribution to military strikes was to fire eight ‘Storm-Shadow’ missiles at an alleged chemical weapons facility, each of which cost £790,000 ($1.13 million) – totaling £6.32 million ($9 million). The missiles were manufactured by BAE Systems.

Theresa May’s husband has worked as a relationship manager for the research investment company Capital Group since 2005. The Tory-BAE links go even deeper, however. The former chancellor of the exchequer and present editor-in-chief at the Evening Standard, George Osborne’s other employer Black Rock is the fifth-largest shareholder in BAE Systems.

Figures revealed as of March 31, 2018 reveal that the Capital Group has amassed over 360,000 shares in the company, up over 11 percent on the previous quarter, which may have contributed to a hefty rise in BAE’s share price, which currently stands at around 600p.

When asked at the time of the scandal about her husband’s role, a spokesperson for the UK PM told reporters: “Mr May is involved in the development of Capital Group’s retirement solutions. He is not an investor but consults with other Capital associates on retirement products and solutions for clients.”

The latest news comes on the back of a recent deal agreed by BAE Systems and the Saudi government for the provisional sale of 48 Typhoon jets to the kingdom. The deal was welcomed by the relevant government officials from the UK and Saudi Arabia, who say it would help safeguard jobs. However, it was criticized by arms campaigners worried about the ongoing war in Yemen.

Companies profiting from war – not a new concept, but many may question how this all sits with Philip May, the PM’s supposedly ‘closest political ally.’