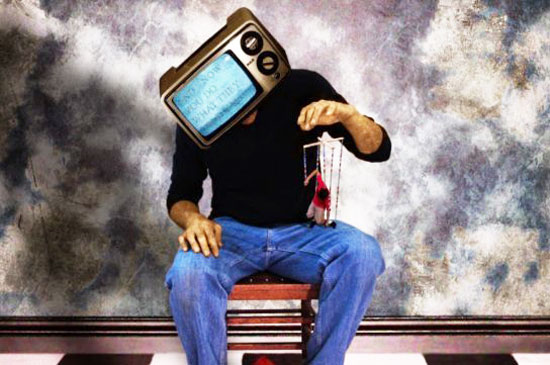 “The people will believe what the media tells them they believe.” George Orwell

“When a well-packaged web of lies has been sold gradually to the masses over generations, the truth will seem utterly preposterous and its speaker a raving lunatic.” Dresden James

“Nothing in the world is as it seems.” On one level, the ‘theatre of illusion’ world we live in believed by many to be true can be mainly attributed to two things.

1. The hidden controllers running the planet have managed to manipulate the mass media and in effect control consensus reality. This has been done to produce the desired behavioural patterns; thoughts, opinions, attitudes, social norms in the masses so that they can be ruled over. In short, the media is regarded by the hidden controllers as a necessary tool for a dictatorship.

2. The majority of the human population has allowed itself to be deceived through ignorance, deception, stupidity, chronic apathy or a serious lack of curiosity and questioning, all somewhat bolstered by cynicism. Consumerism rules and as long as their bellies are full and heads filled with mindless entertainment or other gratuitous distraction, they’re happy.  Genetic cloning is unnecessary. Cloning has already been done care of the effects of mass media brainwashing.

Taking the above two factors into account let’s look at just how the mass media controls consensus reality.

Tool for a Dictatorship

The hidden controllers regard the human population as nothing more than sheep incapable of looking after themselves, needing to be shepherded. This has been made abundantly clear over the years by spokesmen/agents for the controllers advocating mind control techniques in the mass media for shaping human thought.

It is advisable looking up names such as Walter Lippmann (1920’s on), one of the founding fathers of the Council on Foreign Relations, the Tavistock Institute, England who have ties to freemasons, Harold Lasswell (1939-40 Rockefeller funded), Sir Alexander King for the Club of Rome in the 1990’s touting the advantages of new communications technology as an agent of change for a ‘one world order.’ It’s quite an interesting insight.

In through the backdoor of the subconscious mind

“If we understand the mechanism and motives of the group mind, it is now possible to control and regiment the masses according to our will without their knowing it.” Edward Bernays

One of the most interesting advocates was Edward Bernays. Most people today probably wouldn’t be familiar with him, but will know his Uncle, Sigmund Freud and many could well have been at some time in their lives under the extraordinary influence of his ideas.

Having studied his Uncle’s work, Bernays knew how the unconscious worked and how it could influence others without them knowing. He very successfully took his ideas to the mass media in the form of subliminal advertising through subliminal perception.

This occurs when we perceive something in the media like, for example, an advert, but only a part of it reaches our consciousness awareness. The rest of the advert, containing a hidden message, is perceived by our subconscious and because we are unaware of this can cause us to behave in certain ways without knowing why. It is sometimes called “in through the backdoor of the subconscious mindˮ.

These “in through the backdoorˮ hidden subliminal messages in mass media can influence us in many ways and without doubt as Bernays had predicted has been as major influence in controlling people’s thoughts, opinions, attitudes without them ever being aware of it.

Now take a look at these examples of subliminal advertising. Most people have found this piece of conniving trickery quite fascinating: 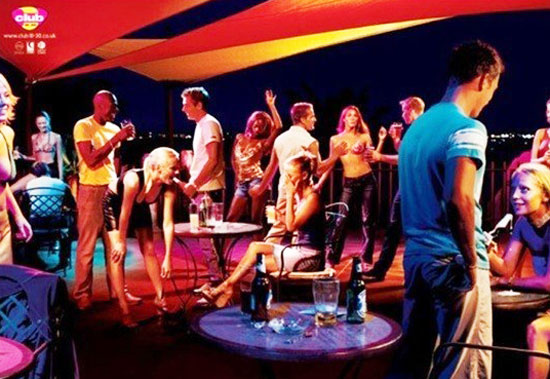 At first glance, this looks like a perfectly innocent advert for the 18-30 club, but when looked at closely you can see the carefully planned out sexual connotations.

The same applies to the advert below. In both cases the adverts are planned so that the unaware prospective customer will only subconsciously perceive the various sexual positions hinted at (but will go on to the buy the holiday?!). 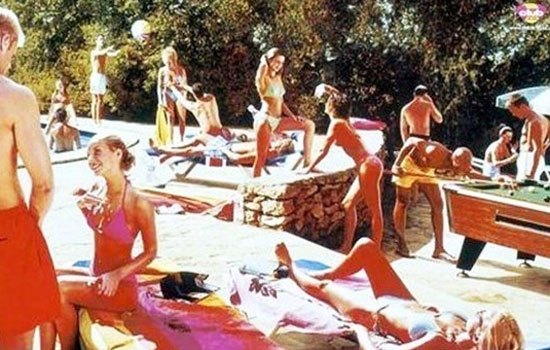 Doctors have been used to advertise smoking cigarettes. Look at these 1950’s adverts. 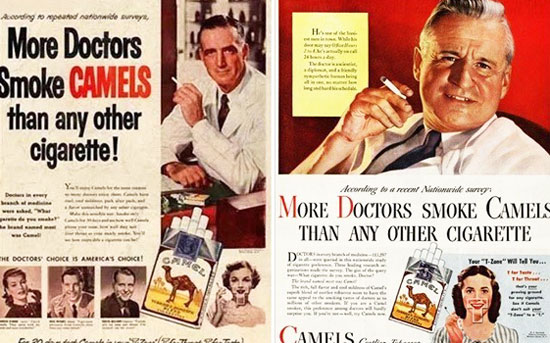 The scheme behind this relates to the subliminal thought that doctors are trustworthy figures. So people then get the idea in their subconscious that it’s healthy to smoke Camel cigarettes.

Remember, subliminal perception is used to influence the masses in a wide range of things; political, educational and scientific indoctrination etc.

The mass media has been and still is a useful tool for the controllers in holding back opportunity for real human growth and development. It has become a massive dam of lies and cover-ups holding back a wealth of knowledge for raising conscious awareness, self-sufficiency and unity for the human race. The result is basically a planet full of people going nowhere in their lives while the walls surrounding slowly draw in closer, further restricting their freedom.

Roughly over 20 years, the entire mass media ownership in the USA has gone from 50 to just 5 corporations: AOL-Time Warner, Disney, Sony, Vivendi Universal and Viacom.

The idea of having so few media corporations means that the hidden controllers can more easily be in charge of what they want to release to the people. This, in essence, means giving the public at large one limited viewpoint, one voice, one point of view, one propaganda message, to produce consent. For example, “There are weapons of mass destruction in Iraqˮ used to engineer consent for the war in Iraq.

A shift in the Wind

“If a nation expects to be ignorant and free, it expects what never was and never will be. The people cannot be safe without information. When the press is free, every man is able to read, all is safe.” Thomas Jefferson

An ignorant population does not look to see the greater way, never questions authorities or understand rights and therefore provides little opposition to a dictatorship. If human beings want to grow as a race they must start educating themselves. Be able to learn to discern. Recognise when the media is trying to manipulate the masses.

Whatever it is people are subjected to in the media, beware of the hidden ulterior motive. Perhaps it would be better to boycott this propagandist pap altogether and instead of being listless or unresponsive, people should do something worth-while and campaign for the truth.