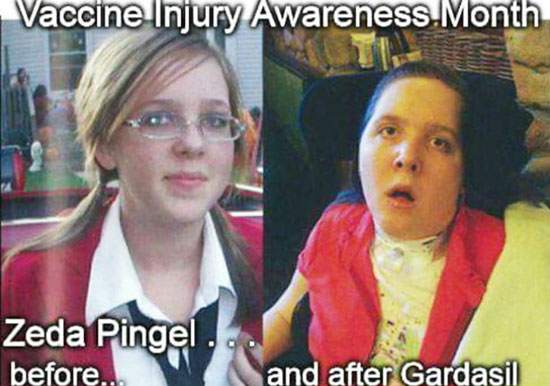 In addition, the mainstream corporate media in the U.S. censors anything negative related to vaccines, so one must look outside of the U.S. to fully understand the devastating consequences of this vaccine.

Sacrificial Virgins Part III: A Penny for Your Pain

Manufacturers of the controversial HPV vaccines Gardasil and Cervarix – routinely administered worldwide despite widespread calls for withdrawal on safety grounds – will soon be sued in courts across the globe.

The topical film A penny for your pain that launched on October 18, (2017) on YouTube, describes how patients as far apart as Japan and Colombia are set to sue pharmaceutical giants Merck and GlaxoSmithKline for damages, following serious adverse reactions, with patient groups in the US, UK and Spain closely following the cases and Australian legal attention focused on prescribing doctors.

In A penny for your pain, eminent Japanese neurologist Dr. Hirokuni Beppu says:
“At present about 120 persons are making law suits against pharmaceutical companies. It is now going on in eight cities in Japan and other additional people are also thinking to start.ˮ “HPV vaccine is useless because it has very low risk benefit balance.”

This follows a 2013 decision by the government of Japan that “cervical cancer vaccinations should no longer be recommended for girls aged 12 to 16” because of the level of serious adverse reactions recorded in Japan.

The film also reports how, earlier this year, a Spanish high court established a causal link between the HPV vaccine and the 2012 death of a young girl after her second dose of the vaccine, and how a class action was prepared in 2017 in Colombia on behalf of 400 HPV vaccine patients.

A penny for your pain is the third film in the YouTube trilogy Sacrificial Virgins, which examines whether the risks associated with childhood vaccination against the Human Papilloma Virus, or HPV, are justified by the claim that they significantly lower the threat of cervical cancer much later in life.

Series writer and narrator Joan Shenton says:
“Sacrificial Virgins concludes that the risk of serious and even life-threatening adverse reaction is high – it’s in a different league to any other mass-administered vaccine. Yet the supposed cancer benefits are unproven.

Individual litigation and class action are the products of frustration felt by patients and patient groups worldwide (the World Health Organization in 2017 has recorded almost 170,000 adverse reactions in 100 countries, including 280 deaths), who believe it is the only way to get pharmaceutical companies and health authorities to admit there is a problem.

Shenton concluded: “It’s a reminder of other scandals, from Thalidomide in the 1960s to XXI century vaginal mesh implants, which led to a record $57m in damages being awarded in 2017. For years, manufacturers will claim no problem exists until suddenly the courts find that it does. HPV vaccinations are heading towards that point.”

The last word in A penny for your pain is left to Australian Kristin Clulow, injured following treatment in 2008: “I would like to say to them that what they are doing is unethical. They need to research their product – they need to take it off the market and research it – because what they are doing is hurting people… this is a permanent brain injury that I’ve had to live with for nine years.”