Finally, the truth is beginning to spread.
Readers, please keep translating this story to as many languages as possible and share it as far and wide as you can. Helping to educate people away from Sunni Jihad propaganda is powerful.

Swedish Doctors For Human Rights (swedhr.org) analyzed videos of the alleged rescue after a previous alleged chemical attack in Syria and have stated that they believe the “White Helmets” a known Islamic jihadi propagandist group, were not engaged in rescue at all. In fact, the doctors even questioned whether or not those working to “rescue” the victims were actually killing some of them.

Due to the graphic nature of the video, we will not post it here, but you can see it online here. The video was published on March 10, 2017, and is not related to the alleged recent chemical attack, but to one that took place two years earlier.

Here’s a video explaining what the Swedish doctors are claiming.

Prof. Marcello Ferrada de Noli, Chairman for Swedish Doctors for Human Rights wrote in a report that “findings I obtained in a further examination of videos published by the White Helmets, and which aimed to represent consequences of an alleged gas attack in Sarmine in March 2015. The videos depict a medical rescuing scenario focused on ‘lifesaving’ procedures on children.”

“The new findings, which have also been confirmed in second-opinions issued by MD specialists and members of Swedish Doctors for Human Rights (SWEDHR) on March 12, 2017, a) demonstrate that the main highlighted ‘life-saving’ procedure on the infant shown in the video was faked”, he added. “Namely, no substance (e.g. adrenaline) was injected into the child while the ‘medic’ or doctor introduced the syringe-needle in a simulated intracardiac-injection maneuver; b) may bring support to the hypothesis mentioned by doctors in the previous report, referring that the child in question, ‘if not already dead, might have died because the injection procedure’.”

“The three children subjected to ‘life-saving’ procedures in the second video were eventually dead, and the cause of death – that according to the White Helmets video would be attributed to chlorine gas – has been disputed by other medical opinions independently of the assessments by the Swedish doctors mentioned in the SWEDHR reports”, he continued. “For instance, in the opinion of a UK doctor, the health-status in reference to the above mentioned child could be instead attributed to drug overdose, likely opiates.”

“The findings in these reports raise serious questions about the ethical integrity of the organization White Helmets, on the anti-medical procedures they advertise in its videos, and the war-criminal behavior represented by the misuse of dead children with propaganda aims” he concluded.

Now, this should cause us to ask, if the rescues are faked in order to help the jihadists in Syria, then is it possible the chemical attacks are also fake? Furthermore, if they are not fake, is it possible the attacks were conducted by the Islamic jihadists who seek to overthrow Bashar Assad?

If you think we’re going off the deep end, we remind many of you that you claim not to trust the mainstream media. However, consider this side by side on how an actual sarin gas attack was handled in Tokyo and what we’ve been shown in Syria. 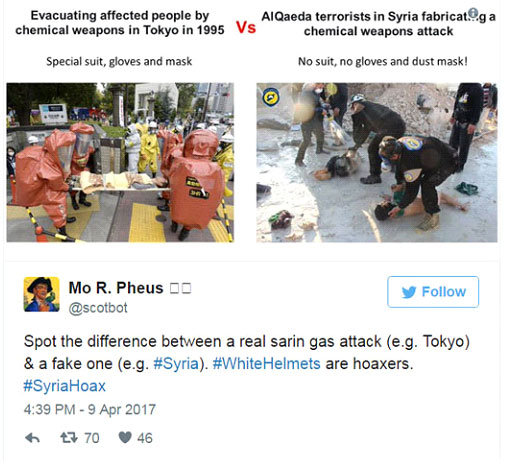 President Donald Trump has said the “enemy of the American people” is the fake news media. Isn’t it interesting how all of the media is on board with what is going on in Syria? Isn’t it telling how Nancy Pelosi and Chuck Schumer, as well as Hillary Clinton are right there supporting what was done in Syria these past weeks by President Trump? We are being readied for war there.

Is anyone even asking about the White Helmets? Who are they? Find out for yourself.

Macedonia Online reports:
“The so-called Syrian Civil Defense (SCD), commonly known as the White Helmets, was founded in Istanbul, Turkey, in 2013 by former British officer James Le Mesurier, who underwent training courses offered by the Turkish Search and Rescue Association. In the ensuing years, SCD grew to a full-fledged organization of some 3,000 volunteers operating from over a hundred local civil defense centers across Syria. SCD is supported by the aid agencies of a number of external donor governments, such as the UK Commonwealth Office, Denmark, Germany, the Netherlands and, most notably, the US Agency for International Development (USAID).

The White Helmets claim to have rescued over 70,000 people, yet judging by its own imagery was found to have been rescuing the same ‘victims’ at different occasions. Additionally, White Helmets members were found to take sides in the ongoing Syrian war, carry arms, sport Islamist imagery and defile the corpses of Syrian soldiers.

Meanwhile, the process of glorification of the White Helmets goes on in the Western world. In 2016, the White Helmets received the Right Livelihood award, which is commonly called the ‘alternative Nobel Prize’. In February 2017, an eponymous a 40-minute documentary about the White Helmets by director Orlando von Einsiedel won an Oscar for best documentary short feature, whereas celebrity actor George Clooney voiced plans of developing a feature version of the film.”

The White Helmets have been exposed in the media as well. On October 26, 2016, then-presidential candidate Hillary Clinton mentioned the White Helmets fake rescue of a little boy. Just a month later, it was confirmed that the White Helmets stage rescues that appear as though they are legitimate.

Finally, listen here to Canadian journalist Eva Bartlett expose not only the White Helmets as “not credible”, but also the majority of Western media reporting on Syria.

“I’ve been many times to Homs, to Maaloula, to Latakia and Tartus [in Syria] and again, Aleppo, four times. And people’s support of their government is absolutely true. Whatever you hear in the corporate media is completely opposite” Eva Bartlett, a Canadian journalist and human rights activist told a press conference arranged by the Syrian mission to the UN.

“And, on that note, what you hear in the corporate media, and I will name them – BBC, Guardian, New York Times etc. – on Aleppo is also the opposite of reality”, she added.

Members of the controversial group “purport to be rescuing civilians in eastern Aleppo and Idlib… no one in eastern Aleppo has heard of them.” Meanwhile, she noted, “their video footage actually contains children that have been ‘recycled’ in different reports; so you can find a girl named Aya who turns up in a report in say August, and she turns up in the next month in two different locations.” 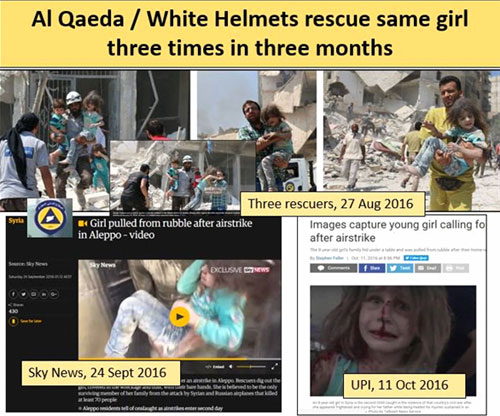 A journalist from Italian newspaper Corriere della Sera took a more measured tone and asked Bartlett to explain the difference between the Western and Russian media coverage, saying that Russian television channels report on humanitarian efforts and reconciliation instead of overt naming and blaming.

“You ask why we aren’t seeing this” Bartlett said. “This relates to the other gentleman’s question about why most of the corporate media are telling lies about Syria. It’s because this is the agenda; if they had told the truth about Syria from the beginning, we wouldn’t be here now. We wouldn’t have seen so many people killed.”

Now, we may ask, how in the world can we trust anything we are being told about what is going on in Syria? The Swedish doctors are right about the White Helmets, now the question must be raised in light of the evidence, who is actually using the chemical weapons on the Syrian people? We may say it’s the same jihadists as before. Syrian Rebels have chemical weapons. This has been proven by multiple sources. In fact, the Rebels freely admit it and even if they did not admit it, they have been caught with chemical weapons.

Try Some Tea – Facts You Want To Know