The list of Chinese food and medicine disasters continues to grow, this time involving the illegal sale of vaccines. 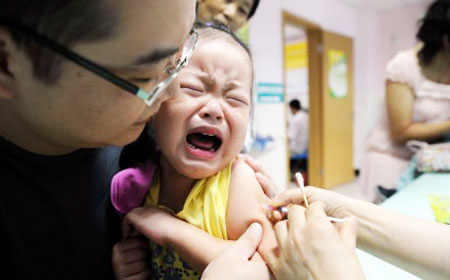 As reported by Chinese press recently, more than two dozen additional suspects have been arrested by authorities, after hundreds of others have already been placed under investigation for suspicion of accepting bribes (which is a common practice in China), abusing their power and negligence.
The scandal, which was first uncovered in March 2016, has reportedly shocked the public.

Chinese justice officials say their main suspect is Pang Hongwei, a one-time pharmacist at a hospital in Shandong, and her 21-year-old daughter. Authorities found them illegally selling a dozen different vaccines, including two kinds of immune globulin and one kind of therapeutic product all over the country.

Investigators discovered a trade ring with Pang at the center, involving some 300 illegal distributors across 24 provinces and regions. Most of the vaccines were originally supposed to be used for children and the elderly.

Pang and her daughter allegedly kept the vaccines in their home at about 57 degrees F, which was much higher than the required 35-46 degrees F for storing and transporting vaccines. Health officials note that storing vaccines at higher temperatures could render them ineffective or even harmful if they are used.

In all, the vaccines are worth about $88 million, which authorities said makes the case the largest of its kind in China, in terms of monetary amounts involved.

At least some of the vaccines may have been tied to the deaths of some children, though Chinese authorities denied that. The size and scope of the scandal not only shocked the country but outraged millions, many of whom criticized the slow pace of the investigation, which took about one year before the initial arrests of Pang and her daughter were made.

“This is such a huge case and not a single regulatory official has come out to apologize, not a single one has resigned… this system which doesnʼt care whether ordinary citizens live or die makes oneʼs soul tired” said one user on Chinese social media.

Repeated instances of unsafe foods and medicines in China

Natural News has covered the various food and medicine scandals involving China extensively:
– In February 2013, it has been reported that most so-called “organic” foods from China are not organic at all. Thatʼs because the government puts no limits at all at how much mercury, lead, cadmium, arsenic and aluminum is allowed in so-called organic foods, noted Natural News founder/editor Mike Adams. “Organic farming in a clean environment produces clean, organic foods. But organic farming in a polluted environment produces contaminated organic foods. And China is one of the most polluted chemical cesspools on the planet,” he wrote. It has been reported on this again in October 2016, indicating that little progress has been made in China to clean up its organic food production.
– In March 2013, it has been reported that American fast-food chain Kentucky Fried Chicken had dropped more than 1,000 farms from its network of suppliers in China, after discovering that chicken from those farms had a high antibiotic content, news that caused a 6 percent drop-off in sales of KFCʼs parent company, Yum! Brands.
– In May 2013, it has been reported that Chinese authorities broke up a 900-person criminal ring that was harvesting meat from rats and other animals, then marketing it as lamb. The “rat meat” was discovered in Jiangsu province and Shanghai. Unwitting consumers regularly bought the fake lamb, however, unaware that they were eating rodents and other animals.

As noted by USA Today at the time, Chinese law forbids the sale of unsafe and poisonous foods, but the statures are vague, and it isnʼt clear what acts are actual violations of the law.
That is likely why there are repeated instances of Chinese food and medicine manufacturers and sellers falling below standard and causing public injury.