What are the ingredients of a good relationship? Trust? Communication? Forgiveness?
How about a sense of smell? When researchers in the United Kingdom surveyed almost 500 people with anosmia (the loss of sense of smell), more than 50 percent of them reported feeling isolated, and blamed their relationship troubles on their affliction. “I worry I will never be able to share again properly in my social and amorous life – I feel like I am an observer,” lamented one anosmic. “It has reduced my desire,” said another. “So much of erotic closeness is wrapped up in smell: It’s how you know who you are with when the lights are off.” 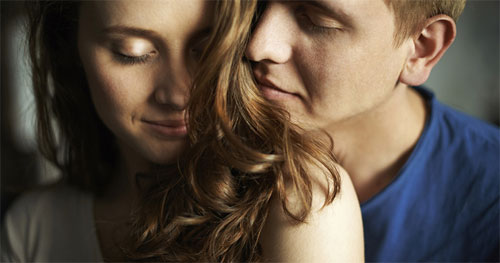 Data back up their claims. A 2012 study on 32 patients co-led by Thomas Hummel at the Dresden University of Technology, in Germany, found that anosmic men had had one-fifth as many sexual relationships as able-nosed controls. While anosmic women didn’t experience this drop, they tended to be more insecure about their partners. Why that might be, researchers are not yet sure. But they have some clues. “Anosmic people feel socially insecure, especially about their body odor, and tend to withdraw from social interactions,” Hummel says. For men, heightened social insecurity could lead to less successful mating strategies or less exploratory behavior, he says.

Smell is important in social bonding, says psychologist Pamela Dalton, at the Monell Chemical Senses Center, in Philadelphia. When a mom smells her newborn baby, the scent activates brain regions associated with nurturing behavior. Smells might also trigger brain activity linked with affection, compassion, or romantic love. Dalton thinks this may explain why many anosmic patients have a hard time bonding with their partners.
“When you do not have a sense of smell, there is a whole level of communication that you are missing,” says Dalton.

What we smell also plays a role in mate choice and detects and communicates emotions. In experiments, volunteers who sniffed sweat samples from people experiencing certain feelings, such as fear or disgust, felt those emotions themselves. When volunteers smelled the odor of disgusted people, their lips curled just as they do when smelling something disgusting, says Dalton. Researchers call it “emotional contagion.” If it’s disabled, we may have a harder time relating to others. “When you do not have a sense of smell, there is a whole level of communication that you are missing,” says Dalton.

Most people do not know or even think that they communicate via smell as well as through words, tone, or body language. Research into the social function of scent is still in its infancy, and some scientists are hesitant to draw conclusions about the extent of its power. “There are very few controlled studies,” says neuroscientist Joel Mainland, also at the Monell Center. In animal models, smell has larger and obvious effects – like ones involving pheromone in insects. For example, a moth will travel miles because of an attraction to a particular molecule. “I think people have a big bias toward exaggerating the level of the effect,” says Mainland. “In comparison to animals it is much, much smaller.”

Although we don’t really know how many people suffer from anosmia, some estimates suggest that two to five million American adults have it. If infants’ sense of smell was actually tested, like vision or hearing is, the estimate might be less uncertain. While some people are born anosmic, others lose it due to brain injury, viral attack, Alzheimer’s, or Parkinson’s disease. Some people could also be genetically predisposed to losing their sense of smell. “The reasons why people are anomsic is not due to what is happening in their nose but what is happening in their brain,” says Darren Logan, olfaction researcher with Wellcome Trust Sanger Institute in United Kingdom. “When you do MRI on them, you will see that they have very small or complete lack of olfactory bulb.” The reason anosmic people tend to withdraw from social interactions, says Logan, could be because of what they can’t smell. But it could also be that anosmic people just think it is because of what they can’t smell, he says.

Duncan Boak, the founder of Fifth Sense, a charity for those with smell and taste disorders, is less ambivalent than Logan. He lost his smell to a brain injury, and since then he has found it hard to connect with people without being able to smell the world around him. “I only knew it when I lost it,” he says.